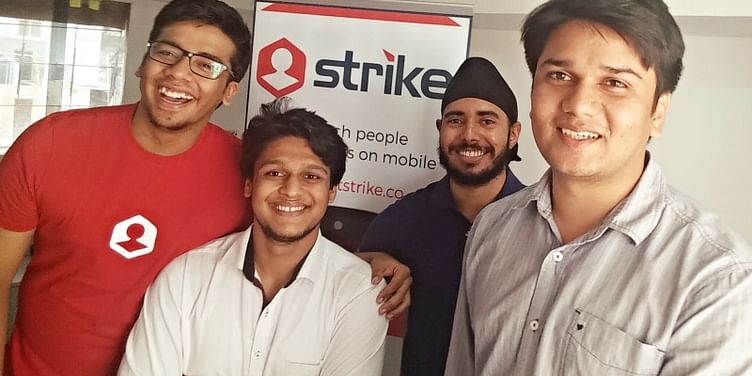 Aishwarya Jain, the Founder of GetStrike, a mobile app that helps Email power users quickly lookup contacts in their emails, came up with the idea after his experience of using Rapportive. With Strike, users can see what people look like, where they work, their social profiles, and public updates right inside the email app on their mobiles.

Having worked in startups, Aishwarya understood the need for daily interactions. He was one of the first hires at HackerEarth and was responsible for setting up sales, marketing, and operations. It required him to be on mails and calls 24x7, as he used to interact with many people every day. "I extensively used few Chrome extensions, like Rapportive, which made my life easier by keeping me updated about the people I dealt with everyday, but when it came to mobile, all I could do was read emails," says Aishwarya.

Recognising and solving a problem

However, after studying existing mobile apps, Chrome extensions, and key differences, he felt this problem needs to be solved in a different way. It needs to feel as natural as it feels in web. People don't like switching between apps. This thought stuck Aishwarya and my Co-Founder, Akshay, so they decided to make this the core of their offering.

Aishwarya adds that research on mobile is broken. It requires users to switch between multiple apps to perform simple functions like looking up a person's profile with basic details, finding what he/she's been up to, etc.

"It was a difficult thing to crack; it's been over a year now and we've completed it. There were several attempts by larger players in the market, but it all failed. There was something that was always driving us to solve this particular problem, which made us experiment with the craziest of things. In the last one year, we tried solving this problem in over 10 different ways, and implemented the most efficient way to solve it," adds Aishwarya.

The way Strike works is, when a user opens the Gmail app and reads an email, Strike identifies the people involved in the email. It then fetches the social information about the people from the backend and instantly displays the information on the user's phone.

Over the last one year, they've been building and improvising their data search engine. Strike now has a robust backend that helps it process and find a majority of publicly available information on people within seconds, from Facebook, LinkedIn, Twitter, Google, AngelList, and Github. More data sources will be added soon.

Setting up scale and the team

The tech team has diverse experience and is well connected. Scaling has never been a challenge. Right from the beginning, they were aware of the issues related to scaling that they might face. Keeping that in mind, they designed the system such that it can handle and process large amount of requests simultaneously, and can be scaled when required.

Initially, it was just Aishwarya and Akshay building the product. After they got into JFDI Accelerator, Amarvir, Akshay's college friend, happened to join them, soon after which the momentum started to pick up..

Akshay looks into all things technical, which includes backend architecture, scaling, data, etc. He has worked with HackerEarth and TweetSecret in the past, and has also contributed to various open source projects by Mozilla, Twitter, and Google. He built the contact-sync service for the Firefox OS phones.

Amarvir looks into all things Android. He has had a game development studio prior to this, with over two million app downloads. He's also been an open source contributor to the KDE project.

Milan has experience in marketing and managing social media with a couple of startups and NGOs. He takes care of the same. He's an aerospace engineer from Bangalore.

Strike went public beta towards the end of June 2015. Since then, they've been growing organically and improving the product by releasing major updates every 15 days. In private beta, the team claims to have been organically growing at a rate of 17 per cent week-on-week.

"There are few apps which try to provide the data that we show, as a standalone app. But the main problem lies right within the Gmail app. No one has attempted to solve this in a way that we are solving, giving much more power to the users, right inside the Gmail app," says Aishwarya.

Currently, the app is in beta, free to download and use. Going forward, they intend to add some premium features for ‘power users’. They are also working on some B2B partnerships.

Strike has been a part of JFDI Accelerator, and has received accelerator funding and a small angel round. They are currently raising a seed round, which is expected to close soon.

The team intends to bring in more features to the existing offering to provide options to users, which are generally found on desktop browsers. The aim is to bridge the gap between the experience on mobile and on desktops. They are also working on an iOS app, which will be launched early next year.