Is your marketing aimed at creating habits? 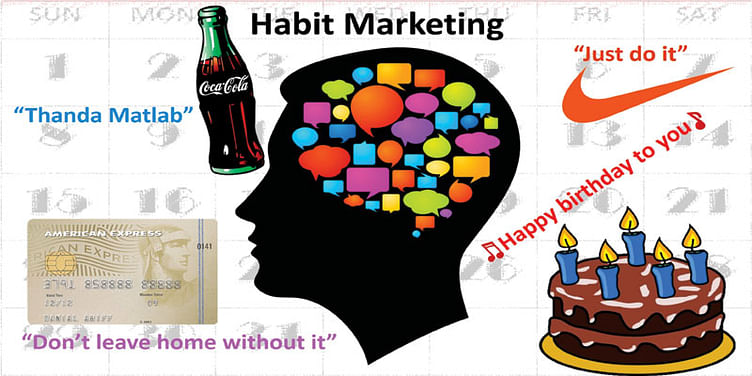 “40 to 45 per cent of what we do everyday are not behaviours. They are actually just habits playing out,” says habit expert Charles Duhigg. No wonder then, that creating a habit is such a prized and difficult goal for every marketer.

Companies may want to induce habits into their employees or their customers.Habit marketing is a very powerful communication objective.

I had my Eureka moment on the science of habit marketing almost a decade ago when I saw the 1975 American Express advertisement that said, 'Don't leave home without it.' A simple, powerful, everyday suggestion with the potential to form a habit.

No one had a credit card in their wallet back then, but today, holding credit/debit cards is a largely sticky habit, and it’s a relatively new, 21stcentury habit.

Some more examples of sticky habits:

The science behind this is that every time you're doing something out of habit, you don’t think too much about it. Habits die hard. Neuroscientists have traced our habits to a part of the brain called the basal ganglia, which also plays a key role in the development of emotions, memories and pattern recognition. A habit happens on auto mode. That's why habit marketing is so coveted.

Habit marketing is just one of the forms of successful brand messaging. The others formats include aspirational, product-centric, altruistic, emotional mirroring, and ‘us versus them' marketing.

So, in case you decide to move forward with a ‘habit-centric’ brand messaging programme, here are some questions you could pose yourself while drafting your brand’s communication strategy:

Take for example Nike’s tagline, ‘Just do it’. It has the implied suggestion that being fit should be a habit. You have to just do it. The habit of offering refreshments or a cold drink to guests has also been about tapping on the power of habits with 'Thanda matlab Coca Cola.' It also applies beautifully to quenching one’s own thirst with something thanda.

Sales people have a tough job. They are selling to a disinterested audience who are likely to slam phones, delete mails, and drop pamphlets into dustbins. Habit marketing reverses this. The customer gets more and more hooked, on his own. It doesn't appear that you're selling something. For example, the slot machine in a casino shows so many near-misses that people with gambling habits are convinced that a win is just around the corner. And they keep betting. There's not a single poster actually asking patrons to bet again in a casino.

Habits come in and go out of our lives depending on our stage of life and behavioural anchors. Not all habits are for everyone, at every age. Watching Discovery Channel with your seven year old everySundaymorning at11 am is not a habit that will remain forever. Hence, the habit suggestion has to be focussed. Major life events such as shifting homes, pregnancy, marriage etc., are great opportunities to introduce new habits.

There's a transient population that comes in and moves out of the consideration set of your suggested habit. They need re-inforcement via stories. Think about the serials on TV. All of them are hooking you on to their story, and trying to become a habit.

5. Am I specifying the reward?

The routine is fine. What we love is the reward at the end of it; it becomes the motive. From social acknowledgment to self-esteem, rewards satisfy people in different ways.Charles Duhigg’s well-known ‘cue-routine-reward’ cycle should be at the core of habit-related communication. Even inconsequential habits like nose-picking and nail-biting have small rewards attached to them.

6. Am I offering compounded value?

Sometimes, when the reward is not immediate, or there’s a distance between cue and reward, the goal of habit-forming products is that they should become more valuable to the user over time, as the user continues to invest in the product; this could be true of habits such as blogging and exercising.

For every planned habit-creation endeavour, there will come along a disruptive habit that will change the way a generation thinks and functions. For example, checking WhatsAppmessages or your Twitterfeed, which did not exist before, and which could potentially be ‘addictive’ and alter behaviour patterns.

Your habit marketing needs to be in line with this evolutionas habits die out and new habits replace them. The morning newspaper, tea and biscuit routine, could have made a cult picture for habits of 1990s or 2000s. The cult picture for the 2015 habits has to have a smartphone and a user obsessively bent over it.