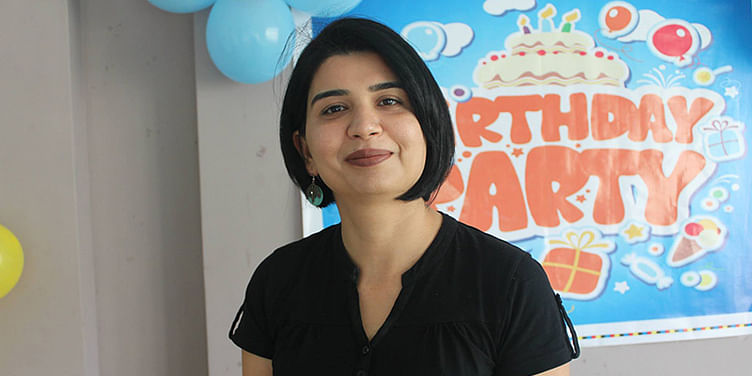 Being a woman in tech is not easy, especially when you hail from a small city. Just ask Bhavna Kalra, who has had to face and bounce back from many challenges. Born and raised in Bhilai, Bhavna was more interested in mathematics than in computers.

Bhavna’s marks upon leaving school were not enough to secure her a place in an engineering or medical college, so she enrolled for a Bachelor of Science (Mathematics) at the Bhilai Mahila Mahavidyalaya. Rather than being dejected, this only fueled her love for mathematics, and she also began to develop an affinity for the computer lab. Eager to learn more, she signed up for a basic computer science course.

When Bhavna graduated college, her parents told her it was time to settle down. This was not unusual for a small-town girl, who didn't have a degree that could immediately land her a job. Bhavna asked for a sixth-month grace period to look for a job. She joined a computer institute as a trainer, before getting married in 2000.

Bhavna moved to the US with her husband. The new country and its culture shocked the small-town girl and she was terribly homesick. International calls were costly, and she would spend 25 minutes of a 30-minute call crying. With nothing to do all day, fatigue started creeping in.

Her husband’s company was shutting down, and then 9/11 happened. Her husband advised her to enroll for a Master of Science in Computer Science, which would qualify her to look for a job. She joined the MS programme at Boston University. After her degree, her husband moved to India to set up the offshore team. Bhavna also came with him and joined Integral Systems, where she helped the team build the backend and integrations. During this time, she also became eligible for an H1B visa.

In 2005, Bhavna moved back to Boston, where she started volunteering with NGOs by helping them build their websites, and with other tech work. She soon joined Sports Royalty Systems, a sports-based startup, which had developed a platform for fans to support their favourite teams. Bhavna was entrusted with building the entire platform from scratch. Bhavna says, "It was one of the most difficult challenges I faced. There was so much responsibility and expectations from me. I had to manage and exceed all of them."

The company closed in 2006, and Bhavna had to go on maternity leave at the time. She later joined care.com, where her husband was VP of engineering, and she worked from home. Bhavna says, "I didn't want to go to office as my identity would then be related to him, and it would have been awkward as I was reporting to him."

Most women in technology face career challenges when it comes to prioritizing family or work. Though Bhavna managed both easily, her main challenge was monotony, and she changed jobs as soon as there was a hint of monotony.

In 2008, she joined UPromise, because her husband had worked there, and she already knew many of her new colleagues. She then joined Bank of America, where she designed and built the customer service application. In 2010, Bhavna and her husband moved to India. They were looking for good schools for their kids, but could not find anything suitable. Her husband decided to solve this problem by starting a listing portal for schools. While working on this project, he met the founder of TeacherJi. The result of their merged efforts was ThinkVidya.

At the time, Bhavna was working at IBM, but she found it difficult to work in such a bureaucratic environment as she had always worked for startups. And there was hardly any work to do. Meanwhile, the co-founder of ThinkVidya had also left, and her husband wanted someone who could focus on the technology aspect as he was focusing on the business part. She quit IBM and joined ThinkVidya as Chief Technology Officer (CTO) in February 2013.

Bhavna has helped scale the entire platform of ThinkVidya to what it is today. ThinkVidya was rebranded as Urbanpro and soon included home servicing in addition to education solutions.

Bhavna says, "The most important thing when it comes to life is the fact that if you are passionate, things are bound to work out in your favour. Be passionate and have your fundamentals right." To everyone who thinks women can't have it all, Bhavna's story is an inspiration.