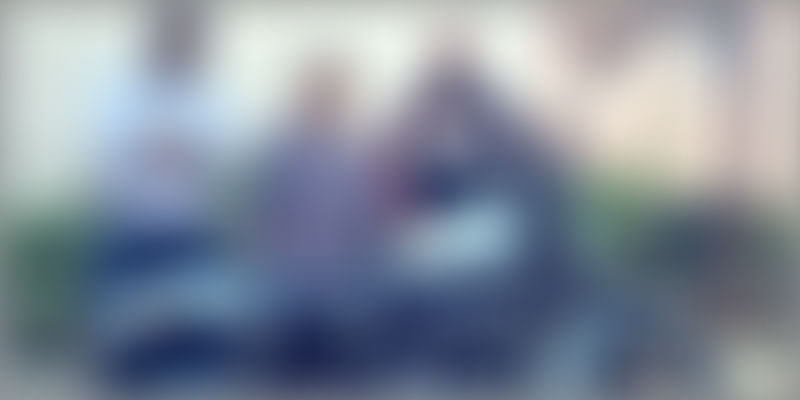 Have you ever idled in an auto fretting about all the tasks you could have completed in the time spent on endless commutes? That’s exactly what occurred to the founders of Yaatra Smart, a solution that wants to help you use your travel time more effectively.

Aparna T.S., Najeeb Narayanan, and Saurabh Kulshrestha, having braved hours of Bengaluru’s killer commutes, decided that if people had to spend a chunk of their lives on the road, it made sense to put that time to good use. Research has shown that the average auto commute lasts 20-25 minutes.

Not everybody has graduated to using smart phones and even then, it’s often difficult to hang on to your phone while travelling, much less get any work done. At present, large sections of non-tech-savvy middle-class people are wary of using e-commerce and are unable to navigate payment processes. Yet, they offer the most potential for e-commerce players.

That’s where Yaatra Smart comes in with its concept of assisted commerce. According to Najeeb Narayanan, founder and Director of the company, commuters are uniquely positioned to receive and avail of targeted promotions when they are free. And Yaatra Smart gives the average middle-class traveller the option of using his or her commute time to make payments and get discount coupons from stores in the vicinity, without needing a smart phone or an internet connection. “We make money from traffic jams, or rather, we help in minimising time wastage while in traffic jams,” explains Najeeb, adding, “We also create a new revenue stream for drivers without deviating from their existing business.”

All you need is a mobile phone and some cash

Founded in 2015, the company has tied up with auto drivers during the pilot phase and installed tablet computers/secured mobile kiosks with the Yaatra Smart app in their vehicles. These tablets are connected wirelessly to the company’s control centre and help passengers pay their electricity and other bills, recharge their mobile currency, and browse through the best offers and discounts available at nearby stores. If a passenger likes an offer, they simply key their mobile number into the tablet and the coupon is transferred to their mobile phone through a simple SMS.

How everyone involved benefits

“Every journey is converted into a mutually beneficial opportunity for all parties – the passenger, the auto driver and the local small business owner,” says Najeeb. “In the larger scheme of things, it’s about digitising the masses and helping the middle class adapt to the latest technologies from within their comfort zone.”

The commissions make it lucrative for auto rickshaw drivers to treat their passengers well and encourage them to run a ‘virtual’ errand during the ride. “You are changing their lifestyle. This prompts them to be nice to the customers. Each driver is running their own business through this, and feels empowered,” says Najeeb. He adds that auto drivers often drive as much as 35 km a day looking for passengers, wasting fuel and clogging up already-crowded roads.

However, the real challenge lay in creating the ecosystem and finding the right drivers and training them from time to time. Aparna, who was a teacher, also proved a shrewd businesswoman. Being multi-lingual, she was able to successfully convince and on board 450+ auto drivers in just six weeks. What helped was that auto drivers were recruited as operation managers, which increased the credibility of the offer.

Co-founders Najeeb and Saurabh, both former employees at Intuit, came on board because they believed that technology could positively impact blue-collar workers’ lives. Saurabh, who had also worked at Microsoft, re-architected the solution to achieve better scalability and performance, and created the payment + wallet infrastructure using Azure services.

Sumit Bansal, also a former Intuit employee, contributed to driving the technology development in the company. The team is also planning to on board team members to handle business development and marketing.

What’s in the works…

Yaatra Smart currently has 1,000 Bengaluru auto rickshaws registered for this service and have piloted the programme with ~90 autos. They have also tied up with the Peace Auto initiative. In addition to utilities and mobile payments, the company has tied up with a real estate company to conduct surveys and generate sales leads from passengers, who are given token gifts of appreciation such as discount coupons or free mobile recharge vouchers for taking surveys during the commute. Data privacy is always assured.

“Homemakers traveling in autos are often the ones who gather information for important decisions the family has to make. This also applies to decisions about which flat to buy and budgets. We capture their profile through a survey during the commute,” says Najeeb. Yaatra Smart is also working with an employee referral company to provide job listings and recruitment solutions. Each auto driver is connected to at least five businesses, whom he gets interested and gets incentives for the advertisements he brings in.

The tech behind it all

Yaatra Smart is a cloud-based service for internet-connected hardware and mobile phones. Najeeb decided to try out Microsoft’s Azure when he began developing the technology. He found it easier to work with it than anything else he had tried. “I had no previous cloud experience, so I always struggled with technical complexities related to developing, how things need to be pushed to the cloud, and synchronisation,” he says. Even though he didn’t have enough cloud experience, he found it very easy to deploy Azure, which helped him stay focused on business rather than worry about infrastructure and technology

Learning Azure had other advantages. Having become well-versed with Azure so quickly, the team entered the Azurider contest and went on to win an iconic Harley-Davidson bike.

The venture is currently bootstrapped and making some good traction. The team is trying to scale the company and operations by increasing revenue from commerce and advertisements. They are also looking for funding. Going forward, Yaatra Smart wants logistic companies to use their fleet. The company, which hopes to expand to other cities, is also working on patented algorithms to further improve passengers’ experience.