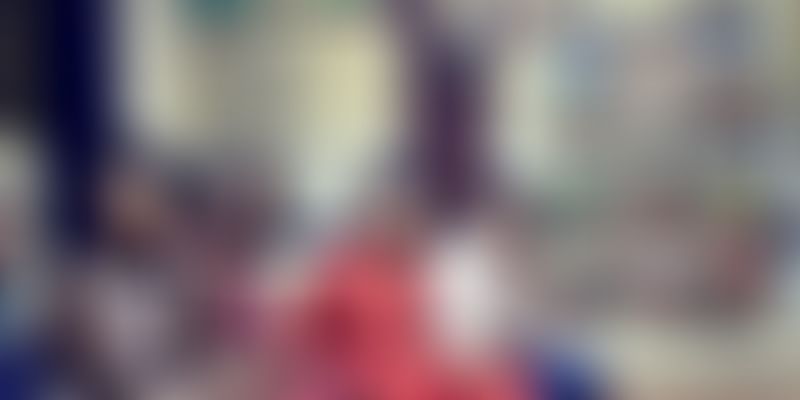 for all we need is bricks

to limit a dream

and climb over each other.

to keep them out

to dam a river

and bury a billion ideas.

and break a wall.

A poem of sorts penned by Sanjukt Saha, an IIT Kanpur alumnus, and founder of One Billion Minds. One Billion Minds helps people chase their dreams. This poem took the form of ‘WallOBooks’, a project that helps underprivileged children break the shackles of their circumstances and shape their dreams using books as a medium. For these children, learning beyond textbooks is a luxury. Poor infrastructure, untrained teachers, and outdated textbooks are creating a wall around them. WallOBooks is helping these children break this wall.

Swastika Gurung grew up in Kurseong, a quaint little town near Darjeeling. Growing up in the hills, her childhood was full of music and sports; people were warm, simple, and friendly. “I grew up like many other kids from that place, with a song on my lips and a dream in my heart”, recalls Swastika.

After finishing school, Swastika moved to Kolkata to attend university. Kolkata was a far cry from home. The city tested her; people called her different names because she was from the North East. She wanted to become an airhostess. “I wanted to see the world”. A tattoo on her elbow didn’t bode well with the airlines and that dream didn’t take flight.

In 2013, Swastika met Sanjukt. A journey that would help Swastika find her real dream and purpose of helping young minds discover the world began. Swastika recalls her interaction, “He was hiring people and then getting them to chase their own dreams. ‘Let us change the world together’, he said. I took up his offer to run a small project with a 100 odd children.” Back then, little did Swastika know that come 2015, and she’d be co-founder of Crayons of Hope (COH).

Swastika began working on WallOBooks. It involved identifying a location, gathering 100 kids, and helping them build a hyper-cool library of their own using just a wall, stacked with books, hence the name. The project team stashes the library with 100 books, a world map, a light bulb and a few more things. The books are carefully curated by the project team who try and ensure that even an expensive encyclopedia or a National Geographic issue finds a way to these children. One of the kids is elected as librarian to take care of it.

The project was a roaring success. Children began doing what they do best –being curious. They were curious to know more about the world they live in and their appetite seemed to be growing exponentially. To cater to a larger group of children, in February 2015, Sanjukt and Swastika founded Crayons of Hope, a Section 8 non-profit with WallOBooks. COH is dedicated to giving underprivileged children a chance at better learning outcomes through various programmes under its umbrella. Till date, WallOBooks has reached out to 10,000 children through 100 mini libraries. Swastika and Sanjukt now dream of building 2,900 such walls of books in India, with 100 in each state to give 1 million children a powerful new way to discover the world breaking the walls around them.

The priority for all education stakeholders, governmental or otherwise, is aggressive focus on the end goal – literacy. But what takes a beating is learning. How much do these children learn, and how is education equipping their dreams? Are we bogging them down with textbooks and stripping them off their imagination and dreams?

Teachers are the most important piece in education, and yet they are poorly paid and demotivated. This means the learning for these underprivileged children is on a further downward spiral as they progress through school. The final result is a population of young adults who are clueless, misguided, and aren’t equipped to participate in the vibrant dreams of their country.

The shift from schooling to learning

COH organises learning workshops every month where children learn to reflect, express, and develop a world view on topics chosen together with their teacher, in fun and playful sessions. Vital skills the child develops in this self-paced learning model include how to acquire knowledge and information from the books they access. They learn to contribute to group discussions with their peers and independently reflect, analyse, and express their thoughts.

COH has also initiated the Identity Project, which has an interesting take on how important a name is to a kid’s identity. Children are told the meanings of their names and are also informed about achievers from different fields of life with the same name. They are then asked to write a postcard introducing themselves. “They do it in an amazing way because they now know what their names mean and who they can look up to as a role model”, says Swastika. The postcards are then exchanged with another child in another school. COH acts as the post office. “This project creates a powerful sense of identity in them. They know they’re important and you see a positive change in these children”, adds Swastika.

In another learning intervention, the Democracy Project, children elect their own leader in an exhaustive and full-featured election. They nominate candidates, speeches are made, queues are formed, votes are cast and a leader is elected. He or she even makes an acceptance speech. In a great example of learning by doing, last year, this project helped 10,000 children with their first brush with democracy.

The children will take all these inputs back home influencing the immediate and extended social milieu around them. Openness towards acquisition of knowledge will gradually disseminate to the entire community and future generations will be exposed to a healthy learning environment at a younger age. This will lead to a better society, with its younger individuals developing greater awareness about how to bring forth and nourish their intellectual and creative selves

COH were named a ‘pacesetter’ by LEGO/ASHOKA in the Re-iMAGINE LEARN!NG Challenge in 2014.

While Sanjukt looks after strategy and vision, Swastika is deeply focussed on execution. Other than the duo, there are six people running operations.

COH is incorporated as a Section 8 Non Profit. The hybrid structure has an enormous role to play in keeping an organisation of this nature afloat and not drowning in financial worry. Swastika elaborates, “One, it keeps us grounded on sustainability right from the beginning. Two, we can take the best from the For Profit and Non Profit side. So, like a Non Profit, there will never be financial dividends ensuring that all funds are spent only on achieving organisational goals. And like a For Profit, we can raise equity, hire the best and pay decent salaries.”

Swastika says that the key challenge in the social space is the lack of collaboration.

In our case, we work closely with 59 organisations to deliver our programmes. We do not tell teachers or the schools and institutions working with the children in our programme, what to change and how to innovate. We collaborate closely with them and prefer to stay in the background, engaging them directly in programme delivery and making our interventions an integral part of what is already delivered in the classroom

As an organisation that caters to the children from the Bottom of the Pyramid (BoP) population, future plans will not be easy to execute. They plan to develop products and services to offer to the next higher level in the pyramid, developing a pay-to-use model that will bring in increasing levels of sustainability as well as continue to maintain a free model for these children.

On a visit to a school, Swastika and team met Saina, an eight-year-old, and asked her who she wanted to be when she grew up. Saina said “I want to be a police officer and catch these criminals who commit crime. Crime is growing so fast in our world – those criminals, I want to catch them.”

Swastika adds, “Saina wants to fly. But first, we need to open a window for her to the world outside. A book can open up that window. In spite of everything that can go wrong around them, a book can transcend all that, protect them and help them grow.”

Saina is now the elected librarian of her WallOBooks at Tiljala in Calcutta. COH will stay with her as she learns to make her dream come true.