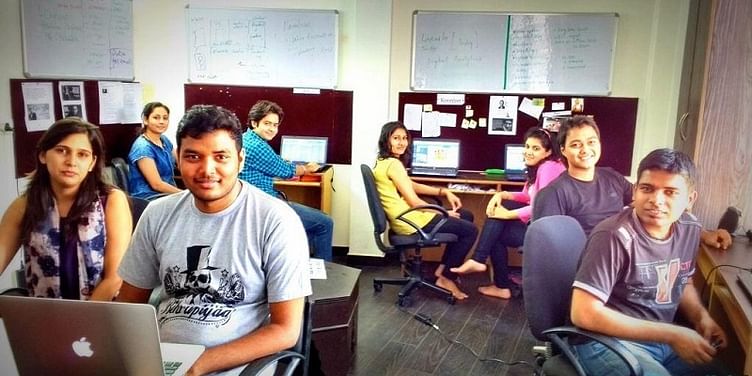 Aditya Agarwal, 25, lived in a nuclear family in Varanasi. When it was time for him to leave for his higher studies in Allahabad, he had one concern:

Once I went for my higher education, I was always concerned, what if someone in my family got sick, who would take care of their health needs? Back then I didn't have a solution.

His anxiety grew when he moved further away to Delhi in July 2012 to study for his MBA. But, it was there that he was hit by the e-commerce bug, prompting him to find a solution to deliver medicines to people’s homes.

While the idea of starting up was successfully seeded, he roped in his school friend Arpit Sarin, 25, who was already working on a few social entrepreneurship ideas, to work with him. Aditya says, “Back then we were job seekers. We didn't know we could build a company. So it was a very big opportunity for us.”

But real inspiration struck in December, that same year, when Aditya and Arpit went on Jagriti Yatra, a train ride across India to shape the entrepreneurs of tomorrow.

We came across all those people who had their own startups and were just like us. They were young with no money and experience, but they did start working on their idea and they ‘did it’. This gave us the confidence. We just knew one thing; there exists a problem that needs to be solved.

From knocking on doors…

The duo launched their product in 2013; today, their platform, Dawailelo, aims to be a complete healthcare solution where medicines are delivered to the doorstep of needy customers. The platform also lists doctors’ details and connects customers to pathology labs to get samples collected and reports delivered conveniently to their homes.

Aditya still remembers the hot summer afternoons when he and Arpit wandered the streets of Varanasi to survey 2,000 households and understand the real problems surrounding the regular supply of medicines.

Today, the platform has served 1,100 unique customers in Varanasi alone, while catering to 500 orders every month from the city, 60 per cent of whom are repeat customers.

Last month, they expanded their operations to Panipat in Haryana. In their first week of operations, they already had 35 unique customers; completing more than 40 deliveries at stretch.

In the next six to eight months, the startup aims to set up shop across six cities in Haryana including Kurukshetra, Karnal, Sonipat, and Haryana.

According to the founders, their main focus is on patients with chronic diseases (diabetes and arthritis), who comprise 85 per cent of their consumer base. These clients have regular prescriptions and require medicines throughout the month.

When asked, the founders say that customers with acute medical conditions (like common cold or diarrhea) don’t form a big chunk of their consumers since their requirement is limited, and they avail Dawailelo’s services only once or twice. Moreover, it is easy for them to source these medicines at a local pharmacy; for chronic patients in Tier II cities, medication isn’t always available in local pharmacies.

Aditya believes that stickiness and loyalty are big factors in their venture’s success in Tier II cities.

The firm states that they strictly work on physical prescriptions where the delivery-in-charge will pick up the prescription from the customer and deliver the medicines by the next morning or the same day.

There is also an automated feature built in to the app, which allows customers to get medicines delivered without having to go through the whole process again.

As of now, all transactions are made in cash as it is easier in Tier II cities. Moreover, the firm is also working on the ‘digitalisation of healthcare’ and a ‘cashless’ programme where the requests would either be taken directly from doctors or verified by doctors before delivery, reducing delivery time and giving the option to make payments online.

Although the firm claims that bookings can be made through their app, website or through calling their helpline, the website is not yet functional and is undergoing some final checks before being rolled out.

Further, the firm has a partner pharmacy in every successive 10 km radius, to facilitate better deliveries. When asked why they don’t want to make the platform a marketplace, the co-founders tell us that it would be difficult for them to monitor each and every pharmacy leading to a compromise on trust and quality of the products.

On the revenue front, since Dawailelo follows the bulk model, they are allowed some margin from their partner pharmacies, of which 10 per cent is given to customers in the form of discounts, while the other 10-12 per cent goes to the firm. The average ticket size of each order received is Rs 1,000.

In the future, one can also expect the platform to have details and information on doctors, helping customers make appointments. In the coming few months, the firm also plans to roll out their app on iOs along with their website.

The firm has also already raised capital from angel investors and is actively looking for their next round of funding.

Of learnings and impact

Talking about the journey, the co-founders feel it has been a roller coaster ride, fraught with perils. They say,

There were times when things were not smooth, but the feeling of working on our own startup has given us the strength to fight every obstacle. We have taken coaching classes, raised funds from our close ones to realise our dreams and have started believing that everything happens for good as they take shape.

The duo tells us that it is overwhelming to see the change solutions bring to the lives of customers.“It is so touching to see how a simple solution changes someone’s world. One of our customers’ husbands is a paralytic, whom she cannot leave behind to buy medicines. Today, she saves herself the embarrassment of asking everyone to get her the medicines. Our starting up seems to find meaning through her story.”

There is no doubt that the startup’s decision to function in Tier II cities is an incredible one. The healthcare services market in these cities is still unorganised, with people going by what their neighbours and relatives say, rather than a doctor’s qualification.

Moreover, according to a report from IBEF, Tier II cities are the next demand source of the future, as 70 per cent of the population lives there. This can also be proved by the fact that for bigger healthcare startups like Practo, 30 per cent of the traffic last year was from Tier II and Tier III cities. While raising $37.5 million in Series B in September 2015, Portea is also making its presence felt in Tier II cities. Companies like Gurgaon-based Pluss are also operating in the similar space of on-demand healthcare and wellness deliveries.

The investor interest is also flaring up, (with $276.5 million invested in startups last year) and bigger players pushing to get into these markets

However, a matter of concern for the company should be scale, considering how bigger players with fuller pockets are ramping up their presence in Tier II cities. Moreover, as Dawailelo is in the hyperlocal delivery space, another trouble brewing on Tier II startups is the lack of sufficient funding.

Shan M Hanif, Co-founder of online grocery store Kada, say that despite being the only player in Kerala with Tier II and III focus, raising Series A has been tough. In another story, Devangshu Dutta, Chief Executive at Third Eyesight management consultancy said that over the last year, investors have become skittish about pouring funds into businesses that have no demonstrable path-to-profit

This explains why Tier I cities are a top-favorite for most healthcare or hyperlocal startups to show traction and profitability in order to attract investments. With such dynamics brewing, we will have to see whether Dawailelo’s expansion to other Tier II cities will really project a scale to attract investments.