How a Dutch investor is addressing the nutrition problem of India 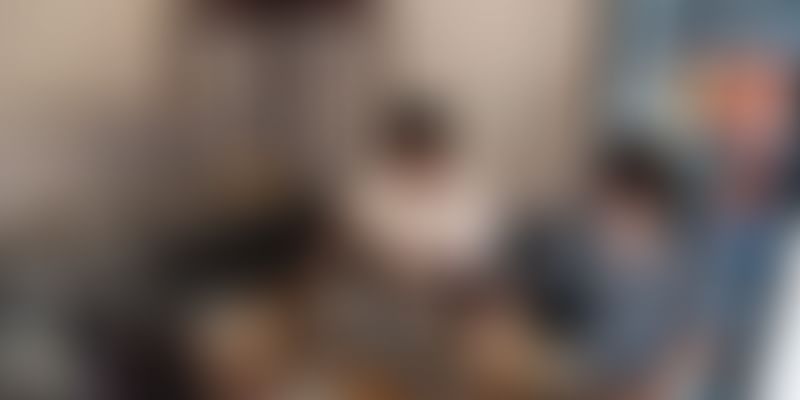 In 2013, when Dutch investor Jesse van de Zand came to help expand the activities of Enviu, a –Netherland-based impact incubator in India, little did he know that he would end up making India his home for the next few years. During a meeting with Prabhat Agarwal, a serial entrepreneur and impact investor who quit the corporate world after working for giants such as HCL and RP Punj Group, Zand learned that Agarwal was trying to address a critical problem that we often overlook – nutrition for the informal sector. That meeting was enough to convince Zand to quit his comfortable, steady career and move to India in May 2013 as one of the core founders and CEO of Janta Meals – a chain of small restaurants in informal and slum areas, where people can have a nutritious and hygienic meal for just Rs 20!

What issue is Janta Meals addressing?

Imagine an auto-driver who drives at least 100 kilometres in a day across the city and eats at a different roadside dhaba or cart to fill his stomach, every time. Most often, he ends up eating unhealthy and unhygienic food such as chaat or chole-bhature. What is the nutrition he’s getting? Or a more serious question would be whether he’s getting any nutrition? This is a not an isolated example. There are countless drivers, cleaners, construction labourers, and security guards who work for over 12 hours a day without a wholesome meal. As Zand says, “Lack of healthy food on a daily basis leads to lesser productivity and ultimately, lower income. It becomes a vicious, never-ending cycle.”

The magnitude of this problem is huge. According to Agarwal,

If you take Gurgaon, which has a population of close to 25 lakh, at least 15 lakh are in the informal sector. If we are talking about Delhi NCR, then the numbers increase 10 times. This means a population of at least 1.5 crore with no fixed income, medical benefits, insurance or pension, or a guarantee that their job will last. Always on the move, with monthly incomes ranging from Rs 5, 000 – 8, 000 on an average, affording a meal at Rs 60 or more is far from reality. And I am only talking about one city.

Addressing this acute need for nutritious and hygienically prepared food is Janta Meals, which provides affordable meals to Delhi NCR’s blue-collar population. For Rs 20, a customer can have rice and dal or roti and sabzi, whereas for Rs 30, he/she can have everything along with some salad.

How does Janta Meals’ model work?

The model works through two different channels. Firstly, Janta Meals has its own outlets across the city, which are run by micro-entrepreneurs. As in a franchisee model, an entrepreneur is responsible for scouting the location and setting up the 8-16 seater outlet, and Janta Meals sends them the food, which is prepared in a centralised kitchen in partnership with The Akshaya Patra Foundation – a non-profit that runs centralised kitchens across India to provide mid-day meals to government and government-aided schools. Since Akshaya Patra kitchens finish their cooking by 11 am, the kitchen is idle to use and Janta Meals has only capitalised on the available opportunity. Janta Meals also trains the micro-entrepreneurs on basic accounting skills, hospitality and other aspects that are needed to successfully run the operations.

The mechanised cooking and bulk purchasing of raw materials helps the company set the price per meal as low as Rs 20. For a micro-entrepreneur, setting up a franchise costs anywhere between Rs 70, 000 to Rs 1, 00, 000, and there have been successful instances where these entrepreneurs have earned close to Rs 50, 000 a month as well!

In the second channel, Janta Meals has tied up with various corporates, who employ informal, contract labour, and supply packed meals directly to their office from the centralised kitchen. Larsen and Toubro is one of the 10 corporates who procure Janta Meals regularly.

With 30 franchisee centres operational in Gurgaon and Kurukshetra, Janta Meals is serving close to 15, 000 meals every single day. According to their website, cumulatively, they have already served 68, 13, 935 meals!

Plans for rapid expansion are underway, and in the next three months, operations will begin in Bangalore, Karnataka, and Vishakapatnam, Andhra Pradesh. Janta Meals is also considering ‘Janta Food Vans’ – mobile food trucks that can park at locations where the concentration of labourers is high, a move to ensure last-mile service.

But, impact isn’t just a number. It’s the stories of people who come every day to have meals that inspire Zand and Agarwal to dream fearlessly. Agarwal recalls,

There was a migrant labourer who used to work in a location where Janta Meals wasn’t available. However, one of his friends was a daily customer at our restaurant and he once took the meals for him to try. In no time, the labourer managed to convince the higher-ups in his organisation to change his workplace. All because he wanted to have wholesome food.

In another instance, Ranjit Galsinh, a 35-year old guard says, “I have been working in Sikanderpur, Gurgaon for over three years now, but haven’t come across a restaurant that serves food that is so cheap and tastes like it’s home-cooked. It helps immensely when nutrition doesn’t burn a hole in your pocket.”

After all, that’s what Janta Meals set out to achieve!