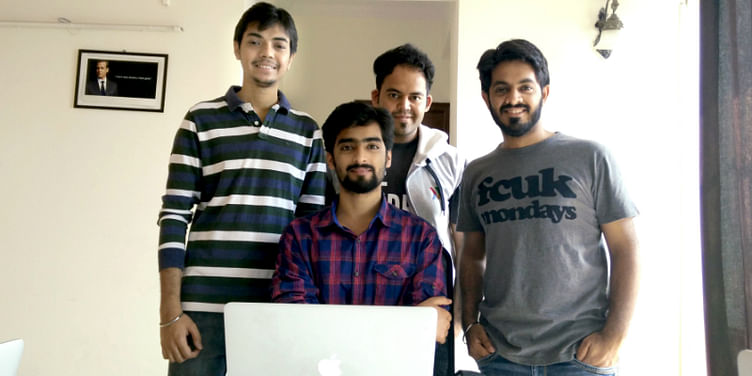 With the high volume of content generated each day across the Internet, it sometimes becomes difficult to discover or find relevant and accurate information. Research has shown that personal recommendations from a trusted circle is the numero uno driver of long-term engagement and transactions.

So in a world that is going digital and relying heavily on the ‘app economy’, Reach, a peer-to-peer (P2P) discovery and sharing platform is looking to leverage this trend. The app, which recently raised $500,000 in funding led by Japanese VC firm Rebright Partners, is looking to create a social graph through sharing of content validated by peers. With over 50,000 users so far, Reach claims it has over 16 million files and more than 2 million file events on its network.

Reach was founded by brothers Akshay Pruthi, Abhay Pruthi, and their friends Ashish Kumar and Ayush Verma in 2015 in Gurgaon. It all began when they were in college, and Abhay and his friends in the hostel transferred various media only via pen drives or USB cables. He wondered if this experience could be taken online through a mobile app.

So, the brothers and their two friends got together to start Reach and went on to build their P2P engine in-house. While Akshay functions as the CEO and looks after overall growth, Abhay oversees the product. Ashish and Ayush lead on the front end and back end technologies of Reach, respectively.

The beta version of the Reach app was launched on 23 March 2015. After months of experimenting and constant feedback sessions with users, they launched their Version 1.0 in 2016.

The social emotion of peeking inside your friend’s phone and discovering content opens up new ways of discovering valuable information. It changes the way people exchange content via their phones today.

Reach functions like a social network and users need to send a friend request and get permission to access his or her mobile collection. The user has complete control over exactly what their friends see and can keep certain content hidden, if they wish. Personal files are hidden by default.

Reach also includes an in-built music player that lets users play their own music or stream music from their friends’ phones. Talking to YourStory, Akshay explained that Reach doesn’t upload any files onto their servers and all shared files get transferred directly across mobiles (P2P) over the Internet.

As files are transferred over the Internet, users are not restricted by location and need not be in the same vicinity. Users can also pause and resume file transfers at their convenience and the app is able to resume transfers in case of connection breaks.

The team believes that their patent-pending P2P technology and the interface of the app will help them capture a global audience. Akshay added that he recently interacted with American technocrat and billionaire Mark Cuban on Cyberdust and got praise and validation for the idea, giving the team a morale boost.

We envision Reach to be the ‘go to’ app for the millennials in India for discovering content from their friends and communicating with them seamlessly.

Currently seeding the product, Reach aims to add B2B monetisation channels once it reaches a certain user base. Eventually, Reach plans to introduce links as another file type and a provision to share images, pictures, and videos using the app, with the user controlling what is visible to others and what is not.

We are now slowly entering a world where consumers are showing a robust appetite for ‘Sharing economy’ because of the convenience, cost effectiveness, and positive environmental impact. But a recent report by PwC stated that 69 per cent of people polled admitted that they don’t trust sharing economy companies until they are recommended by someone they trust.

On the global scale, Airbnb revolutionised the hospitality industry, while Uber, Lift, and Ola (in India) have revolutionised the automotive industry with shared taxis. This phenomenon is now spilling into Media, ecommerce and other sectors.

Coming back to Reach, there is sufficient market validation with other players in the space. Teamviewer is a popular desktop app that lets users control remote computers or start online meetings. Russian social network VK combines multiple social features with file sharing capabilities. Then, there is ShareIt a popular file sharing app that is constantly at the top of the app stores.

Reach is a well-thought-out and designed app that is simple to use. It has unique value propositions for ‘App Junkies’ looking to discover new apps and also for late adopters who wish to try out popular apps that they might not be aware of. The in-built music player is an interesting value addition that aids in music discovery.

The ability to remotely peek into someone else’s smartphone and see the apps they use is interesting and as more users get on the platform, they will be able to notice patterns about app behaviour.

While Reach plans to expand into more categories like links and videos, adding a tab that includes statistics about the most popular apps in a user’s network and similar data points across all their contacts would be a useful feature.

Additionally, a monetisation strategy for Reach could be to integrate music streaming services and recommend music based on a user’s preference or a friend’s playlist. Reach could also engage with celebrities and tech influencers to get them on the platform and give users a bird’s eye view of their mobile habits.

Reach is an interesting app and concept and though it is still early days, there are a lot of interesting possibilities to leverage the ‘mobile lifestyle’ of users. With a lean team and backing from marquee investors, it will be interesting to see how they grow their userbase and also how they go about with their monetisation strategies.