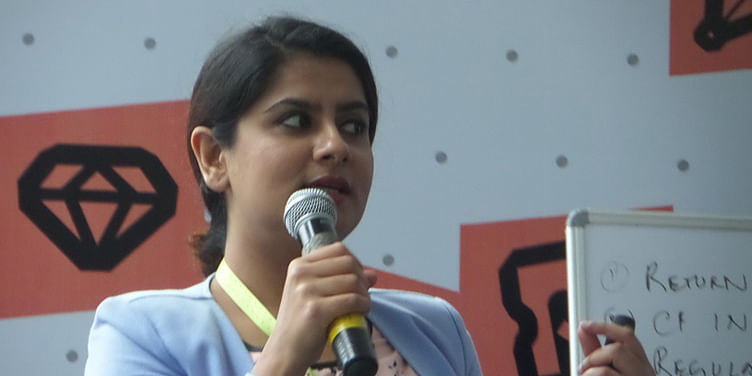 One of the first examples of crowdfunding for an art project in India may have been Shyam Benegal’s movie ‘Manthan,’ which raised Rs 2 each from five lakh farmers in 1976. More recently, film maker Manav Kaul raised Rs 41 lakh for his movie project, ‘Albert Pinto ko gussa kyon aata hai, Part 2’ – this time from the crowdfunding site Wishberry.

How can artists benefit from crowdfunding? Does this work in India? What are the success tips for crowdfunding of art projects? A range of such issues and insights were discussed by Anshulika Dubey, Co-founder of crowdfunding site Wishberry (see early YourStory coverage).

She conducted a packed workshop for aspiring ‘artrepreneurs’ at the recent creativity festival held in New Delhi, The Coalition 2016 (see my coverage of the maker track and quotes compilation). The founders of two of the creative projects pitching on Wishberry – ‘Ramayan’ and ‘Kaamotsav’ – were also present at the festival (see other crowdfunding examples here).

Crowdfunding is of different types, and it is important for founders to understand the difference between equity or monetary crowdfunding (with expectations of financial returns, often for tech products), charity crowdfunding (altruistic giving for a social cause) or passion project funding (somewhere in between the previous two categories, with art gifts as rewards).

Art has often run on patronage, and crowdfunding opens the door to many donors supporting an art project, said Anshulika. Her site has helped raise funds for cultural projects like the first Sanskrit animation film ‘Punnayokti’ (Rs. 41 lakh from 282 funders).

Crowdfunding on an art site has a number of benefits for creators: they have creative control over the project, get a chance to direct sell, engage with the fans, and keep most of the profits for themselves. They do, however, need to entice donors by giving them special gifts in return.

Creators get not just funds and a ready audience but also additional cascading effects, eg. a South Indian actress offered her voiceover services for free for ‘Punnayokti’ after hearing its crowdpitch. Women’s health awareness comics project Menstrupedia caught the eye of Proctor and Gamble, which marketed the product overseas and translated it into languages like Spanish.

The kinds of gifts which art crowdfunders can give donors span a wide range: first access, special reviews, invitations to interact with the creators, autographed works and even the opportunity to collaborate with the founders.

The more creative the gift, the better it can be for donors, advised Anshulika. One founder even offered to take a photograph of himself doing a headstand in a mall, and email it to donors as a quirky gift!

Marketing begins with you

Founders need to do a lot of the heavy lifting of the marketing for their projects – it is not enough just to list on a crowdfunding site, cautioned Anshulika. They must rope in support from friends, family, colleagues, alumni, and related interest groups, as well as market via social media tools such as Facebook Project.

“Your team must be kickass. You have to show your credibility in order to draw trust from supporters,” said Anshulika. Effective marketing has helped over 300 projects on Wishberry raise Rs 7 crores from 12,000 funders in India and overseas, via credit card and Net banking payments.

Be open to feedback

Indians are certainly active and generous when it comes to funding crowd projects, but are strangely shy when it comes to asking for money, observed Anshulika. They need to overcome their sense of modesty or their fear of receiving criticism, and regard such feedback as actually constructive and useful.

“A sense of shamelessness is paramount for crowdfunding success,” said Anshulika, only half in jest. “Have balls,” she urged the audience.

Understand the donors and target audience

People tend to support art projects out of a sense of empathy for fellow creators, support for an artistic or social cause, preservation of culture and heritage, and the like. The audience can be within India, or overseas.

Sites like Wishberry prefer to fund unique initiatives rather than me-too projects. “Shock and awe works in crowdfunding,” said Anshulika. “We want you to be first in your category,” she said.

Show the product and your progress

Founders should not just describe what they will be doing but actually show their prototypes or mock-ups via a compelling video. This gives the audience a much better sense of what the product or service may look like.

Founders are expected to show the progress being made along the journey, with milestones and status reports. These updates are displayed on the crowdfunding site and also promoted via the founders’ social media and offline channels.

Project heads need to understand the metrics of crowdfunding, or the breakup of funds into number of donors, which in turn maps onto the size of social media marketing campaigns. Founders should get a sense of the average donation amount on a crowdfunding site (eg. about Rs. 5,000 on Wishberry), and use that to figure out how many funders they need to target.

Assuming a two per cent ‘hit rate’ on social media campaigns, they should factor a proportionately large social media outreach, eg. via Facebook ads. Preparing for such a campaign alone can take up to three months, said Anshulika.

Support from the crowdfunding site

Sites like Wishberry look for well-rounded founder teams and offer tips and guidelines on how to do social media marketing, pitches and PR, but the heavy lifting has to be done by the founders themselves (thus opening the door to other startups who can offer such services directly).

Future offerings at Wishberry include data analytics reports, campaign templates, and email marketing tools, said Anshulika; the site claims a 77 per cent funding success rate, which could go up with these new services. Wishberry has an ‘all or nothing’ policy with funding delivered only if the full target is met.

“That makes you and I work that much harder for your success - everyone's ass is on fire! Early funders also become evangelists,” explained Anshulika. Future trends to watch are regulatory changes in India which could allow equity crowdfunding, she summed up.