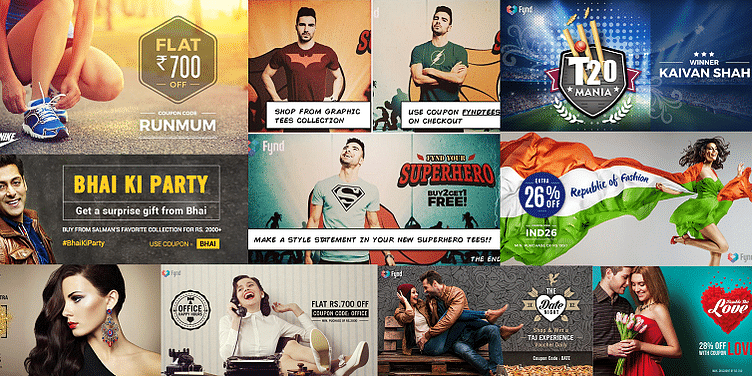 Fynd is a nearby fashion shopping app. What differentiates us from the plethora of shopping apps is our superfast same day delivery. Unlike other apps, we don’t have any inventory in stock, which means when a customer places an order, we pick the item from the nearest store and deliver it. This zero inventory, zero warehouse model allows us to scale fast as a business.

January is the month of end-of-season sales. Brands will be running heavy discounts during this period. We decided to cash in on this with our Festival of Fashion campaign. All we did was simply pass on the discount from the brand to the customer without burning a hole in our pocket. E-commerce in India and everywhere else in the world is characterised by deep discounts and customers have gotten used to it. It will be a herculean task for a new entrant to compete with the incumbents on discounts, and what better way to do this than ride on the brand discounts.

We studied the campaigns run by other e-commerce players and realised that most of these last for two to three days. However, the end-of-season sale by brands usually run for 30–45 days. The challenge here was to create a month-long campaign without tiring out our customers with the same message. So we split our main campaign – Festival of Fashion – into sub-campaigns, which will run for two to five days.

We looked for special dates and events in January and February to run some campaigns.

The dates that popped out were:

Once the dates were finalised, we looked at campaigns that will be based on the brands and categories we have on board. We chalked out a campaign calendar on the basis of this.

To maximise the impact of the campaign, we had to communicate the same message across all channels. We took this as an opportunity to explore marketing channels we have not yet tried out.

In the model, the trigger for us were the brand discounts, the actions were the purchase the customer was making, and the variable reward was the free gift. The investment we were looking at were social media conversations, app reviews, and repeat purchases by the customer.

On February 7, 2016, we hit 100K downloads. It was clearly time to work on the one missing piece in our campaign — PR. We fired off some press releases to few tech blogs and newspapers, and brought back all the previous offers for two days from February 14/15 under the banner #Celebrating100000

Also read: How this Mumbai startup clocked one lakh downloads in just 1 month

None of these would have been possible without some help from technology. This is how our MarTech stack looks like:

Google Sheets — for tracking the progress

Mixpanel — for app analytics and notifications

Acquiring iOS users were two times more expensive than Android users. However, the loyalty and conversion rates of iOS users were significantly better.

After building a small base of iOS users, we started running App Engagement campaigns for iOS users in both Facebook and Twitter to balance out the cost involved in acquiring them.

We also tried out services like CPI Mobi, Airpush, Cheetah Mobile, Moblin, Komli, iCubes and Inmobi. Some of the campaigns we ran on these networks were incent.

Unfortunately, when it comes to city wise targeting most of these networks can’t help you much. Moreover, the loyalty of the users acquired through these channels are really bad.

What they are really good at is acquiring users at a very fast clip and thereby improving your app store rankings. A better app store rank means more organic downloads.

Inmobi stood out from the rest of the mob in terms of loyal users.

After the Festival of Fashion campaign, we analysed how the campaign went. We calculated an Impact Score for each of the sub-campaigns based on the duration, orders generated, downloads, and money spent. The top three campaigns were:

At the end of the campaign, this is how our channel-wise activation looked like.

Running campaigns in context with special dates and events ensures that people can relate to your campaign easily.

Long weekends are not good for customer acquisition. In fact, the budgets you set won’t even get consumed.

Running campaigns during festivals and special occasions can be a very expensive affair as everyone is bidding for the same customer. We quickly settled on a model where we acquire customers during normal days and activate them during special days through notifications, SMS, and emails.

SMS as a channel is considered spammy. The maximum backlash we received from customers were for sending SMSs and the conversion of the channel was also nothing to write home about.

Before January, we were very adamant about shooting and using our own images for all the campaigns. But then came Festival of Fashion and we quickly realised that it is going to slow us down considerably. The pace at which we were churning out creatives forced us to resort to stock images, a practice that we decided to continue even after the Festival of Fashion.

Be flexible. When you learn that a channel is not working, don’t be afraid to abandon it. We did it in the case of offline. We quickly realised that the amount of effort required to design, print, and distribute coupons is really large compared to the output we were getting out of it.

The customer journey doesn’t end with the delivery. In fact, the only time a customer comes in contact with a person from Fynd is during delivery. Use that opportunity to delight the customer.

Secondary hooks work in this case.

Communicate the same message in all the available channels. Being a startup, getting the attention of the customer is something we have to work really hard for. So, when we have it, it is up to us to tell a coherent story and not confuse the customer with different messages at the same time. Whether it is your app, website, emailer or ads, all these channels should be communicating the same message at all times.

Contests on social media has to be real simple. Don’t expect people to go through hoops to get a discount. We ran a twitter contest for our ‘Fynd A Fit’ feature and asked people to share some fashion hacks to win vouchers. We also ran another contest in which people just had to retweet a post to win vouchers. Guess which one did better?

If we were to do the whole thing again, we would put our money on Facebook, Instagram, and Google for acquiring and re-engaging customers and Twitter for just re-engaging them.

With the Festival of Fashion campaign, we have finally settled on a campaign framework that works for us. However, it doesn’t end there. We are still figuring out ways to make the whole process a little better everyday.