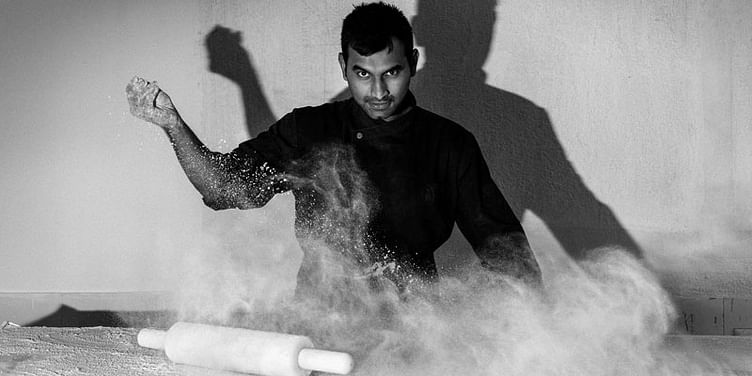 If the sight of freshly baked vanilla cake or a chocolate lava cake makes you want to whip up some sugary magic of your own, then being a pastry chef might be your life’s calling. In addition to surrounding yourself with sweet and savoury delights, you get to sink your teeth into your own creations, so what greater incentive do you need? So how does one embark on this dream career? Professional baker Vinesh Johny, who is passionate about his craft, brings world-class culinary education to India through his Academy of Baking Science & Pastry Arts – Lavonne. Vinesh was featured in the inaugural ‘Forbes 30 under 30’ Asia list for 2016 in the Arts category. Lavonne won the Times Food Award 2016 in the best confectionery category.

The master at work

Vinesh set up Lavonne in 2012, at the age of 24, along with his co-founders Avin Thaliath and Lijo Eapean in Bengaluru, with the aim of making pastry arts a mainstream career choice.

The idea of Lavonne, India’s first international baking academy, came up when Vinesh was pursuing his bachelor’s degree in Hotel Management at Christ College. He then discussed the idea with his professor Avin and his batch mate Lijo and there was no turning back. Vinesh says, “Back in 2008, when I was a student, I wanted to pursue an advanced-level baking course. At that point in time, we didn’t have anything in India. We had to travel to Australia, Malaysia, or France. So that’s when I released that there was a void in the Indian market, when it comes to teaching pastry making and high-level baking.”

After graduating, he went on to work with The Oberoi Group of Hotels and Starwood Hotels and Resorts. He pursued his Diploma in Sugar Art and Wedding cake decoration at Feves de Choco Academy of Pastry Fine Arts, Malaysia, before finding his true calling as an educator.

The art of learning

Vinesh brings his expertise to the table through the masterclasses he conducts in addition to heading the diploma programme at Lavonne. He says that they have made the course very competitive by ensuring their students understand the basics of baking and confectionary thoroughly, and what prospects they have after completing the programme.

Students are offered an internship after they complete the diploma course at Lavonne. Students are then offered placement in five-star hotels. Vinesh adds, “Most students finish the course and do a funded internship elsewhere. Some start their own venture and a few continue their career in baking and confectionary.”

Lavonne also offers weekend courses, which are mainly hobby courses, for those who are enthusiastic to learn about baking.

At Lavonne, apart from getting to savour those mouth-watering desserts, you will learn the theory and the science of baking. Vinesh adds, “We are able to connect the dots for the students, which makes it easy for even a beginner to come and learn at Lavonne.”

Lavonne imports the finest of ingredients from Belgium and France.

Challenges and the science of baking

They faced quite a few challenges before they could startup. Vinesh says, “None of us have a business background, and we didn’t really understand how to go ahead with the processes like documentation, and what licenses were required. We also had issues with our landlady. Everything was in place until we were forced to leave the place just one day before the launch. Then, we were back to square one for almost three to four months. We didn’t have any place at all. Our equipment had arrived and it was too late to pull back from going ahead. So, we had to re-plan, redo, and re-strategise the entire thing. Finally, we found the right place and we are doing very well.”

“Follow the recipe, make sure you learn the proper techniques, and most importantly bake with love,” Vinesh concludes.

Lavonne, affiliated to City & Guilds, London, currently gets students through word of mouth and social media. Apart from the award-winning patisserie attached to their academy, Lavonne have plans to set up cafés in and around Bengaluru, which will be run by students so that they get hand-on experience on how the business works. They also have plans to expand globally. It is currently bootstrapped and there are plans to raise funds next year.

Baking is a multi-billion-dollar business. The number of players in this segment is increasing slowly in India. Home bakers are also starting to take this up as a profession after doing short-term or long-term courses.

Some of the competitors in the sector include IBCA, CCDS and AIBTM.

There are pros and cons with most careers and businesses. However, if you add a spoon of dedication, a pinch of patience, and a cup of determination to your tray of inspiration, you will have the recipe for a successful baker.