How to climb a wooden tower in a sari? The story of one woman and an endangered bird 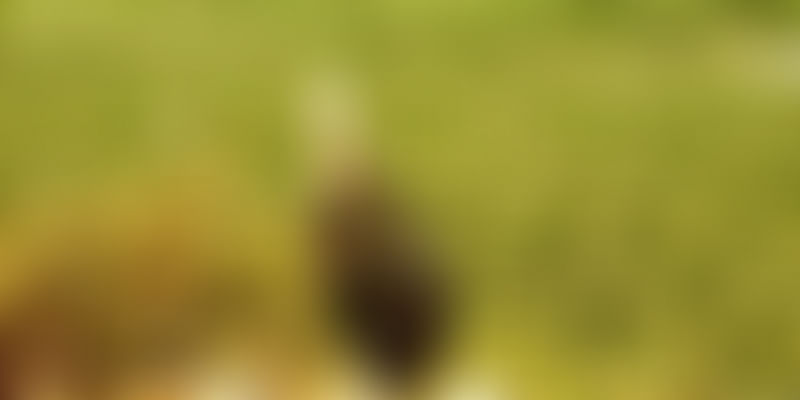 She climbs up a 100-foot-high bamboo tower in a mekehla chadhar (the traditional Assamese version of a wraparound) with ease. Her husband, Rathin Burman, also a wildlife biologist, complains that she loves the birds more than him, but Purnima Devi Burman is undeterred in her pursuit to save a critically endangered bird.

She is charming and effusive; at times you think she is naïve, but underneath that calm demeanor is a strong woman who is breaking many a stereotype in rural Assam. One day she is atop a bamboo tower rescuing birds, and the next she is traipsing across the world for a mentoring programme on ‘Women in Conservation’. She has won many accolades for her work, and yet, her single-minded focus is on how to save the Greater Adjutant Stork or ‘hargilla’ as it is known in the local language.

Once found in large numbers across Asia, this rather awkward-looking bird has a massive wedge-shaped bill, a bare head and a distinctive neck pouch giving it the appearance of a bent-over man. Due to its odd looks and its scavenging habits, the Greater Adjutant Stork was not always welcomed by local communities. But Purnima decided to change it all. This wildlife biologist decided that doing her PhD on the birds wasn’t enough; she had to come up with a strategy to save them. Today Purnima’s work has been welcomed not just by the birds, but the local villagers who have become partners in conservation. Recognised as a global leader in wildlife conservation, Purnima has mobilised an army of “hargilla” supporters, bringing together 14 women’s self help groups to protect the birds.

Purnima was born in a village on the banks of the Brahmaputra River in Assam. With her father being in the Army, she recalls spending a lonely childhood, which is when she says she ‘unknowingly’ connected to nature. Purnima reminisces, “I remember, during my childhood, I would see King Vultures and Adjutant Storks feeding on carcasses of cows in the paddy field. My grandma, with her little local knowledge, answered lots of my troubling queries often telling me that those are bortokola, sagun, samukkhola calling them by their local names. This was just my memory, but I never thought that I would be working on this species”. It was while pursuing her Masters in Zoology that she decided she needed to give back to nature. And that’s how her work in the village of Dadara and Pacharia started in Kamrup district of Assam , just 15 km from the capital Guwahati. Assam, in fact, boasts of the highest concentration of this species. That’s why conserving them here could help save the entire population.

The storks breed on treetops on private land. That’s why the involvement of land owners is crucial for any conservation intervention. During her initial surveys in 2009, Purnima found that people would often cut down trees on which the birds nested; there were also large scale mortalities when the chicks would fall from the trees. Today, the same people have helped Purnima set up a protective green mesh under each tree, and help her rescue chicks that fall from nests. With the help of the NGO AAranyak where she works, and help from local people, from the 80 nests when she first started, today those numbers have increased to 140. The green mesh installed below each nesting tree has helped reduce mortalities and shows how a simple device can save a species.

The main reason for Purnima’s success has been her commitment to the people and their culture. At their local festivals, the people offer prayers to the Adjutant Storks and the women even take out a procession with giant cut outs of their favourite bird.

It hasn’t been all easy for Purnima. The challenges are physical and emotional. “I am working in three villages with more than 10,000 people. I think when managing people, communicating a proper message and sustaining it for the cause is the most challenging task. Sometimes, some people come with a different agenda and disturb our conservation spirit. But I source my energy from my Hargila Army of women, school children, tree owners, and I regain my strength”.

Perhaps what is most charming about Purnima is her earnestness, as she shows me her work in the village proudly; she reveals her plans to involve the local police station in her conservation endeavors. She even wants hardened criminals who spend a night in lockup to be made aware of the Storks and asks for my opinion’ Don’t you think even criminals will be happy to know more about the bird?”. Purnima is earnest but not naïve; she knows the landscape, she knows she must involve local people and state agencies like the district magistrate and police in order to make this a people’s project. Her enthusiasm is infectious, the local police station even has a Plaster- of- Paris replica of the Adjutant Storks – a concrete symbol of her work – in their courtyard. It is perhaps the only police station in the country to be celebrating the conservation of a species!

Purnima’s husband Rathin is familiar with her work and its challenges, as he too is a wildlife biologist running a rescue centre for injured wildlife in Kaziranga National Park. They have two children, but she’s happy that her parents and her husband step in when she has to travel on her assignments. It helps that my husband too is into conservation. He understands the challenges”, she adds. Purnima giggles about her husband reprimanding her for climbing up the tower in her saree, “It’s a good sign right, that my husband is worried about me?”

Today, Purnima is getting the village women trained in handloom weaving using bird motifs in the shape of the Adjutant Storks. She hopes that the traditional weaves will not only generate income, but also add to the collective pride of the village in hosting the birds. “When there is a strong focus on your goal, nothing can stop you” she says.  A lone woman working for the preservation of a bird species that most had labeled as ugly. As Purnima ascends into her world of the Greater Adjutant Storks, 100 feet high, she says she forgets all her problems sitting quietly, making her notes, watching them against a fiery sunset. Here’s wishing this Stork Lady more wind beneath her wings.