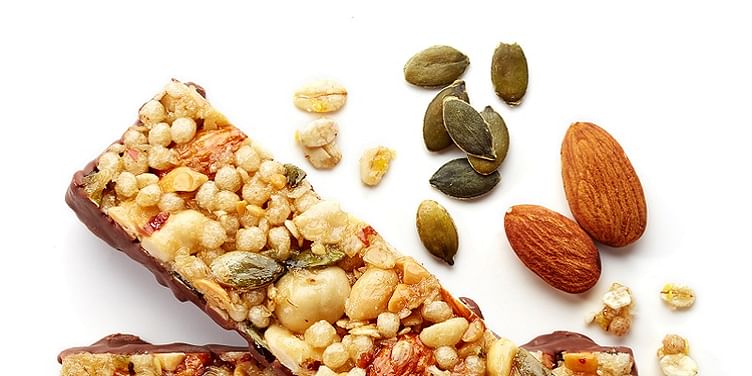 In India the term 'namkeen' usually calls to mind images of tasty, but greasy, fried and completely addictive sev and bhujias. However, today, there are a slew of startups focussed on helping people switch to healthier and still tasty options. There are some attempting to even replace the ubiquitous cola with a healthy drink.

From Himalayan apple chips to kale chips to interesting health bars and snacks, these startups incorporate healthier ingredients from different sources and process them in a safe and organic way.

In the first quarter of 2016 alone the amount of funding made in the space of packaged food and beverages was approximately $129 million and the number of deals made in the space were 15. We at YourStory decided to take a sneak peek into the top health-snack startups that are mushrooming in India.

Started by sisters Suhanisi and Anindita Sampat Kumar in August 2014, Yoga Bars came about after a rather gruelling and difficult hike. The duo were working in New York, where the market for on-the-go energy and snack bars is big and diverse. They realised they wanted to create something similar in India.

They worked for two years with over 50 bakers across Bengaluru to finalise the recipe, ingredients and set the products. After six months of efforts, Suhasini and Anindita were able to gather the needed capital, set up the manufacturing unit and it took them another six months to bring in the right set of people on board. (Read More)

Simple chai-time conversations are interesting but also unhealthy as one cannot simply keep track of the junk food one tends to munch on. It was the Eureka moment for Arun Prakash, Arul Murugan and Mary Shamla. Looking at all the greasy options available in the market, the trio decided to set up a health nuts startup in Chennai.

Started in August 2014, they initially wanted to offer cut fruit platters, roasted lentils, and fruit salads, but realised that the logistics required for perishables would complicate things, and hence shifted focus to dry snacks. (Read More)

The idea of The Green Snack Co came to Jasmine Kaur after close to a decade-and-a-half struggle with weight issues and failed diets. In a mode to change her lifestyle Jasmine realised there was no tasty, crunchy and yet nutritious snack available in the market. This gave birth to The Green Snack Co.

Quitting her job she began work on the company and started doing research on various healthy snacks available globally. She found that the one product that had a ubiquitous presence in diets world over was the leafy vegetable kale. The Green Snack Co began with three variants of the kale chips. (Read more)

A clinical researcher by profession, Deepthi Anand exited Semler Research in December 2012 to start Valencia Nutrition. Her 14-year-old clinical research background brought her into the health and nutrition segment.

Conceptualised by Aditya Sanghavi while working at Themis, Mumbai, Snackible was launched in May 2015. The idea came to Aditya when he observed the unhealthy eating patterns at workplaces, especially between 4:30 to 6 during teatime.

He realised that the biggest problem to getting on a good snacking regime was that there is usually a clear trade-off between health and taste. Snackible brought in ingredients that are sourced directly from the source across the country to create dry healthy snacks. (Read more)

Savad, hailing from Papanacheri village, saw a huge opportunity in the packaged juices segment. But he also saw that most people would pick juices that weren’t healthy and full of preservatives. While most of the juices appear to be freshly made, they weren’t so. Savad started Juice Maker, as a small juice shop in Koramangala. Having realised his passion, Savad tells us how serving fresh healthy juice to customers is what drives him forward.

Juice Maker is a monthly, subscription-based B2C service aimed at providing fresh juices to individuals based on their requirements. (Read more)

Started by Maulik Mistry, an ex-Nestle employee, MojoBar sells healthy snack bars. Maulik returned to India and saw that most people would consume snacks that were full of sugar, fried and highly salted. He realised that there was a need for nutrient-rich foods. That is when he decided to start MojoBar.

There are three variants: Choco Almond and Protein, Nutty Apricot and Fibre and Yoghurt Berry and Anti-Oxidants. These bars have the perfect proportion of good fat, vitamins, fibre, protein and carbohydrates that are generally recommended by nutritionists for snack time.

Started by Anju Sood, Anu Berry, and Angie Mahtaney, Rejoov aims to offer an easy and convenient way to eat and drink healthy foods and beverages. Seeing the dearth of healthy, tasty and fresh foods in the beverages space, they came up with the idea of Rejoov Cold Pressery.

Using the cold press technology, the juices are extracted from fresh fruits, seeds and vegetables. The team says that this pressure allows the preservation of vitamins, minerals, antioxidants and live enzymes. These juices are sugar-free, and have no preservatives or artificial ingredients. Their core ingredients include blueberries, pomegranate, goji berry, amla, and spinach and chia seeds.

A little about the space

The behaviour of the average consumer of snacks is fast-changing, and the need to switch to healthier options is fast growing. It is this very change that has got in a growing number of players in the space. A PwC-FiCCI report stated that the nutrition foods, snacks, beverages and supplements market is growing at a CAGR of 10 to 12 percent in a Rs 14,500 to 15,000-crore market.

From 2004 to 2013 alone the sales in this category grew from Rs 8,000 crore to a whopping Rs 47,000 crore. It is believed that urban India specifically has the most growth in this segment. However, the FMCG market is one of the most competitive and difficult markets to break into. These companies not only have to compete with large corporations like Nestle and PepsiCo but also create a habit-forming behaviour among the masses.