The Arctic likely to be ice-free for the first time in 100,000 years 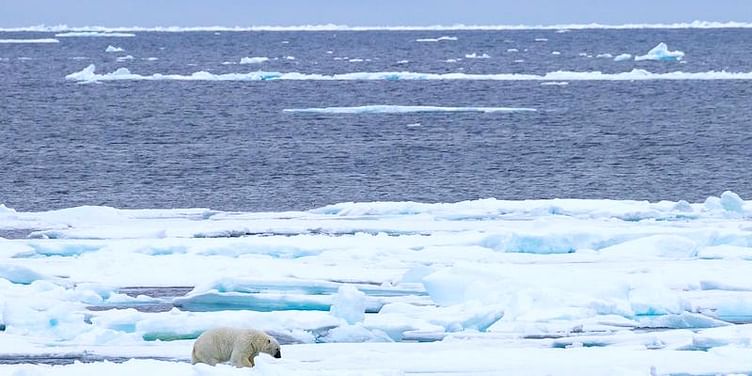 The Arctic is on track to be free of sea ice this year or next for the first time in more than 100,000 years, a leading scientist has claimed. Provisional satellite data produced by the US National Snow & Ice Data Centre shows there were just over 11.1 million sq km of sea ice on 1 June this year, compared to the average for the past 30 years of nearly 12.7 million sq km. This difference — more than 1.5 million sq km — is about the same size as about six United Kingdoms.

According to The Times Of India, Professor Peter Wadhams, head of the Polar Ocean Physics Group at Cambridge University, told Independent that the latest figures largely bore out a controversial prediction he made four years ago. “My prediction remains that the Arctic ice may well disappear, that is, have an area of less than one million sq km for September of this year,” he said. “Even if the ice doesn’t completely disappear, it is very likely that this will be a record low year. I’m convinced it will be less than 3.4 million sq km [the current record low].

“I think there’s a reasonable chance it could get down to a million this year and if it doesn’t do it this year, it will do it next year. Ice free means the central part of the Arctic and the North Pole is ice free.” Most of the remaining ice within the Arctic Circle would be trapped among the myriad of islands along Canada’s north coast. The last time the Arctic was clear of ice is believed to be about 100,000 to 120,000 years ago.

The rapid warming of the polar region has been linked with extreme weather events such as “bomb cyclones”, flooding in the UK and out-of-season tornadoes in the United States. And the sea ice off the north coast of Russia, which normally insulates the water below to keep it cool, is no longer present for much of the year, allowing the sea to get significantly warmer than before.