Microsoft buys LinkedIn: Will it be another integration to death? 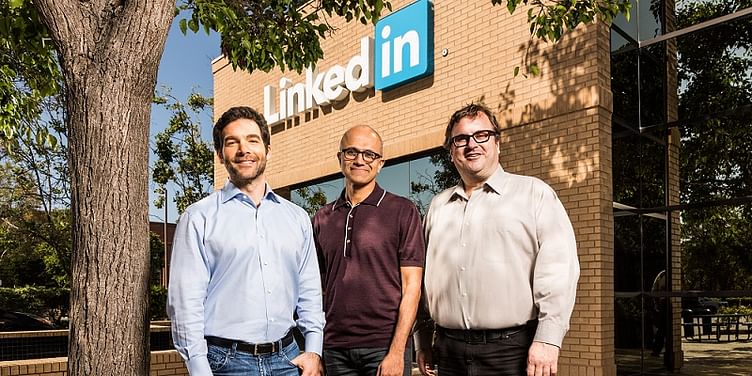 Microsoft’s $26.2-billion splurgeon LinkedIn, the highest since Satya Nadella took over as CEO two years ago, does make a lot of sense strategically – at least theoretically. Although Microsoft didn’t exactly specify why it’s buying professional networking site, the deal is in the direction for a company trying to reinvent itself from a desktop software behemoth to a cloud computing services provider. From that perspective, LinkedIn – with its 433 million user base comprising professionals – no doubt brings a lot to the table.

Here are a few examples Nadella and Weiner gave in a conference call with investors: LinkedIn could give Microsoft’s productivity software the social-network piece it’s always lacked, while Office and Outlook could make it easier to keep your LinkedIn profile updated. LinkedIn’s newsfeed could draw on, say, your Calendar schedule to become more engaging, which could, in turn, boost its ad revenue. Cortana could scour your LinkedIn network to create a quick brief about who’s attending your next meeting.

Related read: Why Microsoft-LinkedIn deal made sense to Satya Nadella

However, Microsoft has a checkered past when it comes to acquisitions and subsequent integrations. According to Barron’s Roger McNamee, a veteran tech investor, questioned whether LinkedIn users would flock to Office 365.

For Microsoft, history repeats itself with surprising regularity… and unfortunately, it’s a tragic history. First, they miss the bus, and then they get run over by the same bus while trying to play catch up.

In 2007, after missing the search engine bus to Google, Microsoft bought aQuantive, an online ad company, for $6.3 billion; five years later, it wrote off $6.2 billion on the acquisition. Similarly, after missing the mobile OS war to Google and Apple, Microsoft bought Nokia’s mobile unit in 2014 for $9.5 billion, before writing off $7.5 billion on the purchase a year later. In hindsight, the LinkedIn acquisition could be a story of another missed bus – social networking.

In fact, Microsoft was one of the early investors in Facebook. In 2012, Microsoft acquired a Facebook-like internal service for companies large and small. It was supposed to complement Microsoft’s enterprise suites such as Dynamics, Sharepoint and Office 365, and drive up adoption of other services, but businesses haven’t flocked to the tool the way the company might have hoped while Facebook for Work (for connecting coworkers) is slowly encroaching into LinkedIn’s fiefdom with corporates such as L&T Infotech, Godrej, Yes Bank, and Landmark Group joining the platform.

The reason Yammer failed to take off could very well be the reason LinkedIn may not work for Microsoft – it’s a clash of the 'freemium' versus Microsoft’s legacy contracts. A freemium model lets a customer’s employees start using a free version of its product, and if they find it useful, they talk their IT departments into paying for higher-end management features. For Microsoft, even the app that you are allowed to download on the mobile phone for free is actually tied to a contract for the PC.

LinkedIn also has its own share of problems. Although Microsoft’s offer price of $196 a LinkedIn share comes at a 50% premium to Friday’s close, that’s still nowhere near the $250+ level the stock was trading at a year ago. A growth warning, massive security breach causing reputational damage and the introduction of new revenue-generating but annoying features. LinkedIn investors are surely a happy lot today and the Board’s unanimous decision to accept the offer only points to a grim outlook.

So, will it be another integration to death for Microsoft’s acquisition? Honestly, no one knows (and that includes me), except time. According to an article titled, “The Big Idea: The New M&A Playbook”, published in Harvard Business Review in March 2011, “Almost nobody understands how to identify the best targets to achieve that goal, how much to pay for them, and how or whether to integrate them. Yet they are the ones most likely to confound investors and pay off spectacularly.” For the time being, companies like Twitter and Slack could see increased excitement in the M&A market.