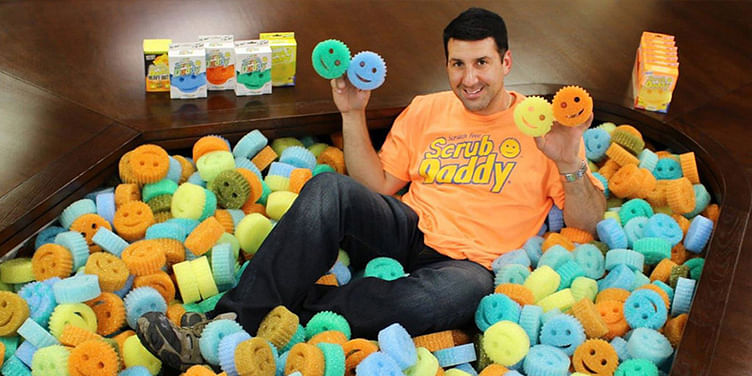 Some eat, some clean and some make a million dollars in the process. Meet Aaron Krause, who turned a simple idea into a million-dollar company. His success story as the CEO and founder of Scrub Daddy – a company that serves as an inspiration to all aspiring entrepreneurs, everywhere.

Scrub Daddy is a company that was founded in 2008 by Krause and Business Mogul Lori Greiner, after the latter invested in it in the fourth season of the famous reality show- ‘Shark Tank’. The company sells smiley-faced dish washing sponges that changes its texture and feel depending on the temperature of the water. The features of this sponge is that it is scratch-free and odour resistant, as well as dishwasher-safe. The sponge gets hard in cold water and soft in warm.

Krause graduated from Syracuse University in 1992, with a major in Psychology and a minor in Marketing. In his early days, Krause ran his own business detailing cars that turned into a brief success in 1994 in the small town of Bala Cynwyd, in Pennsylvania. While he was working in the production department at the company, he damaged a car as he was machine polishing and that got him to invent a new kind of buffing pad, which was acquired by the 3M Corporation in 2008.

Krause had always had a bone for invention and even as a child, would be constantly inventing in his room, much to the vexation of his family. Thus, a show like Shark Tank served as the perfect platform for him to showcase his talents.

“The show highlights people with inventions who are going through a process that I’ve gone through many times – having an idea and figuring out how to fund it and bring it to market. The program shows you the process in a fun and entertaining way, but it also gets people’s creative juices flowing. What better way to show the entire country in one media outlet your product and make it where it’s not a commercial, but something people want to watch,” says Krause in an interview with SJ Magazine.

Krause came up with the idea behind ‘Scrub Daddy’ in the strangest way. During his days of manufacturing buffing pads for cars, working with the chemicals in the factory would often get his hands scrubby and greasy. He thus initially began to formulate the concept of the Scrub Daddy sponges for cleaning hands purposes, and after toying around with several different materials, found the perfect combination for it. But his eureka moment took place another day-

“I took some Scrub Daddy sponges home to wash my deck furniture and left one in the sink. At home, my wife cooks, and I do the dishes. I used the Scrub Daddy to wash the dishes, and the skies opened up. I realized I missed the boat. This thing had nothing to do with scrubbing your hands. It was the greatest kitchen sponge I ever used,” he said.

When Krause took part in the Season Four of Shark Tank, he didn’t know if his product was strong enough to sell to the investors. But the tides were turned in his favour and one of the ‘Sharks’, Lori Greiner, also called ‘The Queen of QVC’, saw some potential in his product and made him a deal of $200,000 in return for a 20 per cent equity. She even helped him expand his product line by bringing Scrub Daddy into QVC and stores like Bed Bath & Beyond, Walmart and Target, where they have become best-sellers.

On being asked about co-partnering Scrub Daddy with Greiner, Krause said- “Our goal is to have this in every supermarket, drug store chain and major retailer in the country and in the world. I’ve already been contacted by probably 20 countries since “Shark Tank” aired. They want to be distributers of the product.”(as stated in the SJ Magazine)

Krause emphasizes on the need to make your product unique and to sell it the right way. In the case of Scrub Daddy sponges, his pitch was-

The fact that one can endorse an idea as simple as making a smiley-shaped sponge (USP: more durable, hygienic and effective than a traditional sponge) that can be turned into a multi-million business, goes to show that if you play your cards right, the world will invest in your idea too. Krause’s philosophy towards all entrepreneurs is much the same- to believe in your product and make it the best.