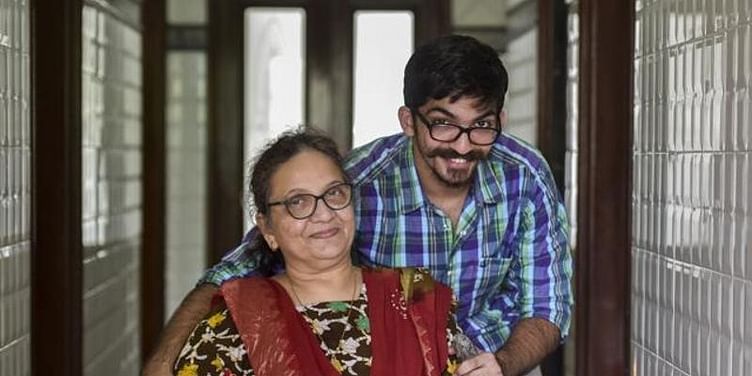 Munaf Kapadia and his mother, Nafisa Kapadia, were having lunch at their home in Colaba on a Saturday afternoon in November 2014. However, instead of just the mother and son enjoying a good Bohri meal, this time around they were joined by six strangers. The idea to invite people over for a paid meal was a hit and that’s how The Bohri Kitchen, a concept food dining experience in Mumbai, was born.

Today, The Bohri Kitchen is not only a famous home-dining experience in the city, but also has its own kitchen and delivers food at your door step.

For many, Bohri cuisine is a rare delicacy, possibly tasted at a friends’ or at a wedding. For Munaf, crispy kheema samosas, roasted raans and succulent chicken angaari was a regular meal.

Munaf began his venture by mailing 50 of his friends, talking about his mother Nafisa’s food, for a paid meal on a Saturday afternoon.

From then on, there has been no looking back for Munaf and Nafisa.

“If you ask people what is it you would like to do if you had all the money, the answer most likely is open a restaurant. And it was the same for me. I was happy with my job at Google,” says Munaf, the Chief Eating Officer of The Bohri Kitchen (TBK).

Munaf adds that the initial idea of TBK was that of opening a fun café, for his mother. But three days of research into what it takes to opening and operations of a restaurant in Mumbai, gave Munafs a reality check.

Though there was a gap in the market, where Bohri food is unavailable, the concept of opening a restaurant wasn’t viable, because they didn’t have the financial bandwidth or risk capital to open a restaurant.

“I had given up on the idea, but thought why not for fun, without working about the business, invite people home to eat authentic Bohri food,” says Munaf.

Discussing the idea with Nafisa, the mother-son duo came up with a ‘regular’ menu which, Munaf says, was what they would have for a nice regular Saturday lunch. They just fixed on a basic price of Rs 700.

After that first lunch, Nafisa found the experience was unique.

“It felt nice when Sonali, one of the invitees, hugged me, and thanked me for the food. It was at my house in a quaint environment,” says Nafisa.

Then, they used to invite people once in two weeks. People would come into Munaf’s home and get a flavour of rich Bohri cuisine cooked by Nafisa.

“My dad wants to send neighbours food. He wants to make sure that the person who works with him, has home food every day. There is always extra food,” says Munaf. When they started TBK, Nafisa was fine with the idea, but Munaf’s father wasn’t open to the idea of charging people. However, after a few experiences, he found the idea to be viable.

At that point in time, the only marketing channel Munaf used was emails. Bookings would be done by Friday evenings for eight seats. But it soon became difficult to attract eight people to pay money for home food, especially with email being the only form of communication.

No spams and serial killers

It was somewhere along this time that the mother-son duo decided to create a Facebook page. It is was then that he even created the logo, using Arabic font. Overnight the page got over 250 likes. Since it was open to the public, Munaf decided to create something what he calls as – the ‘No Serial Killer Policy.’

This meant that before a person comes to TBK, they needed to verify who they were. The seats weren’t open, one had to request for a seat. “The person, who possibly needed to go through the most amount of verification was me,” jokes Gurmeet Kocchar, Founder of SpiceBox, Munaf’s friend and now partner at The Bohri Kitchen.

The duo met at the NH7 weekender event, and since then have been working together, through common connections. It was with the partnership with Gurmeet that TBK could be taken into the world of home delivery and foodtech.

From emails, soon Munaf began creating Facebook events for TBK, and the people who subscribed to the page would get an update. Soon it came to one dining experience every week. It was during this point in time that The Brown Paper Bag decided to do a review on TBK. The reviewers had a great time and needless to say TBK got rave reviews.

At that time somebody asked Munaf what was his vision for The Bohri Kitchen, and Munaf answered saying: “One day Shahrukh Khan will wake up and will happen to have strong craving for Bohri food and land up at The Bohri Kitchen. It is the kind of grand vision we had,” says Munaf.

The Mother of all Feasts

Soon people started speaking and writing about The Bohri Kitchen. And from Rs 700, the price went to Rs. 1000 and they still sold out. It was then they reached a point where they wondered what next could be done with TBK.

“My mother and I wanted to do something new and interesting,” says Munaf. One of the aggregators Trekurious, who curated experiences across the city, came for a meal at The Bohri Kitchen and asked Munaf if he wanted TBK to be one of the experiences on the site.

Initially reluctant, Munaf didn’t want to dilute the experience. He wanted to create a solid base and brand standing before teaming up with another website. But after discussing his reservations, Munaf realised that they could create an experience, which was unique for the site and space. It’s then they created ‘The Mother of all Feasts’ last year.

Entering into the world of foodtech

The experience would have kaleeji, bheja fry, while Bohri food is generally rare. The menu for The Mother of all Feasts was more exotic, rich, and heavy. The nine-course meal was priced Rs 2500.

Today, the regular TBK experience is priced at Rs 1500 on weekends, which sells out two weeks in advance.

While the home-dining experience was going great, Munaf couldn’t figure out a way to make the project scalable. Home-delivery option wasn’t viable as Nafisa was the only person cooking.

With all the popularity, The Bohri Kitchen as a home-dining experience would make over Rs 80,000 a month. This got Munaf thinking and he knew that the brand was worth more than that. It was only about eight months back, he quit Google to focus full-time on TBK.

It’s never as easy as it looks

“It possibly was one of the most difficult times for me. The first time I got on the field, I had no clue how to setup a kitchen, get demand, technology, logistics or anything,” says Munaf.

It was during this time he decided to join the NH7 weekender.

Munaf calls this TBKs biggest operational challenge at the time. For the first time he had to take food to another city. It was after meeting Gurmeet, the pace of everything changed. Having set Spicebox, Gurmeet understood the challenges and the operational requirements needed to setup an online kitchen model.

After the NH7 experience, Gurmeet went ahead to try out the home-dining experience. And sitting at McDonalds in Lower Parel, the duo built a rough model of the process ‑ replicating and exacting the recipes, setting up kitchens, packaging and getting home delivery running by March this year.

Working along a newer model

But for the teams to understand and replicate Nafisa’s cooking was difficult. This was because each and every ingredient and detail, measurements needed to be perfect. While everything else were on time, this took eight to nine weeks. The first kitchen they setup was in Worli. With Gurmeet’s connections they were able to build a team of qualified chefs, kitchen staff and packaging facilities.

However, when the team got their first negative review on Zomato, Munaf shut the kitchen and they began re-working on the experience to ensure that the brand of TBK gets no more setbacks. The re-launch now has been eight weeks old, and the rating has been good so far.

Nafisa won a competition for women entrepreneurs at InOrbit Mall in Malad, which got them a stall in the mall for nine months. Currently, the team at The Bohri Kitchen is looking to expand throughout Mumbai before venturing into other cities and geographies. Currently bootstrapped, TBK will look for funding towards the end of the year for making an entry into other markets.

Several reports suggest that the food delivery market is growing at 40 percent per annum and is believed to touch a market size of $10 billion by the end of this year. On the other hand, the food retailing market is believed to be worth $300 billion and the Indian restaurant market is pegged at $50 billion.