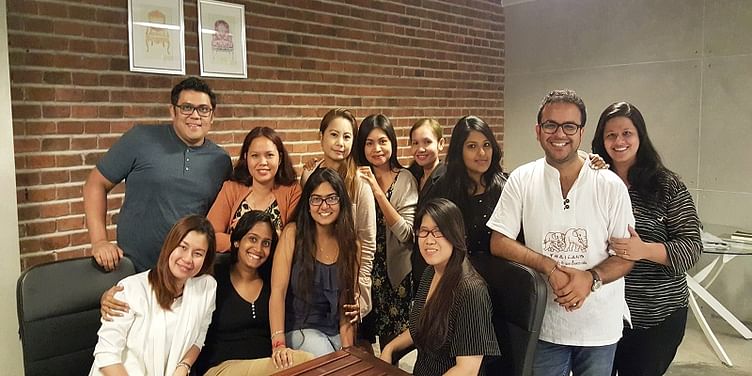 While shopping on her vacation in Bangkok, Ankiti Bose noticed that the several small and medium-sized enterprises in the region had possibly the best things to offer. But she also noticed that despite being huge markets, where people even from other parts of Southeast Asia shopped, these stores barely had any access to digital platforms besides Facebook, and couldn’t effectively market themselves online.

This led to the birth of Zilingo, a fashion and lifestyle marketplace, built for the Southeast Asian market. “We have over 1,500 sellers in Thailand and Singapore, primarily selling clothing, accessories, bags, shoes, beauty to over half a million users, across the globe,” says Ankiti.

Ankiti discussed the idea with friend and next-door neighbour Dhruv Kapoor, and the duo initially worked on the idea while still on their day jobs. They both were equally passionate about building a technology-driven consumer Internet business, with a focus on scalability and localisation.

“We also agreed that Southeast Asia was the perfect market to build, with a clear first-mover's advantage in and that’s how we ended up travelling across the region and zeroing in on it,” explains 25-year-old Ankiti.

While Dhruv, an IIT Guhawati graduate, has worked on localisation of tech before with Yahoo and Kiwi, Ankiti, an St. Xavier's Mumbai graduate, had understood the business aspects of working in SEA, with her stint at McKinsey and Sequoia.

In the first few months of operations, the duo focussed on two things - building a really good ecosystem for the small sellers online with Zilingo, and creating an engaging app that makes buyers keep coming back for more.

Starting with a team of family and friends, who moved to Thailand, Zilingo now is in four countries - Bangkok, Singapore, Jakarta and India (Bengaluru). On the diversity in her team, Ankiti says,

We have people from five nationalities in our teams and we serve three very different markets and work in three time zones. It’s a lot of great learning and the whole vibe in the company is that of a fun, young multicultural hotpot.”

The Southeast Asian market is huge in its own way. Zalora is believed to be one of the largest e-commerce fashion platforms of the region, the Rocket-Internet company is also said to be selling its operations in Thailand and Vietnam. Zalora had in fact claimed that by the end of 2014 they had over 17 million monthly visits across ASEAN and had gobbled up over $238 million in funding.

Smaller markets and local entrepreneurs use Facebook and Line effectively and informally for e-commerce. A TechCrunch report states that in Thailand itself, the GMV (gross merchandise value) from sites like Facebook and Instagram was $510 million. The report stated that this accounted for one third of the total e-commerce GMV of Thailand.

Ankiti believes that most of the biggies in the market are either horizontal marketplaces or have inventory-based models. Also, platforms like Facebook, Line and Instagram aren’t restricted to only buying and selling. She adds that Zilingo is one of the few platforms that have access to thousands of small fashion sellers and the unique products they sell but hold no inventory of their own.

This has led to our app becoming extremely popular and at the same time, making our business operationally profitable. Also, I'd say with the given competition, unless you fundamentally differentiate your product offering in such a way that it can hook your users (both sellers and buyers) - it is impossible to keep the interest in your business alive once the initial buzz dies down.

With Zilingo’s language and currency localisation and cross-border logistics framework, Ankiti adds that these small stores are going way beyond their traditional boundaries. On the other hand, she says their buyers get access to their features like image search, in addition to chat, wish lists, and recommendations.

Following a marketplace model, the team charges their sellers a commission on each successful transaction. Sellers can use features like payments, marketing, order management, inventory, cataloging, and pricing - complete with analytics and intelligence, all currently free of charge. However, they are charged for per-order fulfillment.

With more than 1,500 small businesses selling to over half a million users, and growing at 40 percent every month, Zilingo claims to be one of the fastest growing e-commerce companies in Southeast Asia. Bello, a store that has been selling on Zilingo since October 2015, says that the platform has helped them get higher orders and their revenue has doubled, which in turn has given them the budget to expand their business.

Zilingo is one of the fastest growing marketplaces in SEA. While making their growth, they also keep their business metrics very healthy. They are proving that both growth and healthy unit economics can be managed simultaneously.

The team is looking to enhance the use of artificial intelligence and machine learning-led features on their mobile app and website. “We are also looking to aggregate sellers in at least one new geography this year, beyond Singapore and Thailand, and to start shipping products to as many new geographies in the region as possible,” says Ankiti.