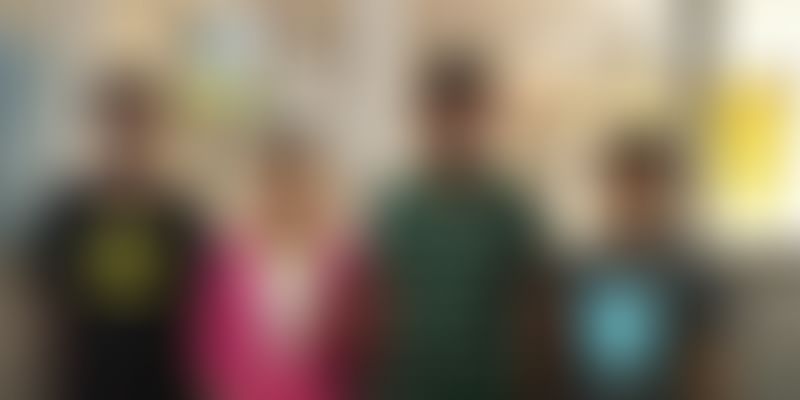 Four engineers — from different engineering streams and different schools — came together in Bengaluru over an idea that could make an impact on children’s lives. Nagasravya Tandule (21-years), Vikram Rastogi (24-years), Aneesh Durg (19-years) and Piyush Anand (20-years) met through online engineering forums to build a device that could make reading easy for dyslexics and the blind. According to the UN, there are a total of 15 million blind people in India, of which 25 percent are children. There are no numbers to estimate the total dyslexics in the country The four engineers wanted to go after this segment because of their expertise in Natural Language Processing technologies. In computing language, NLP means that the machine is trained to use human languages to communicate with people.

The idea was born — in October 2015 — at ISM Dhanbad, where Nagasravya was in her final semester. She created a framework for a device that could use natural language processing algorithms and read books like a normal human being. She contacted Vikram Rastogi in Bengaluru, through a post on a social media channel that he was scouting to partner with projects that could change India. Vikram, being an IIT-Kanpur alum from 2012, was keen on working with ideas that could be challenging from a technology perspective and also from a social perspective. He was also awed by the entire IoT revolution that was sweeping the world. That’s why he teamed up with Nagasravya in January this year to build an affordable ring device that could read books. "The idea was to design and build a product that could be affordable and whose production could be scaled up to different markets," says Nagasravya, Co-founder of Aami.

They were quickly joined by two more partners, Aneesh Durg and Piyush Anand. Aneesh is a sophomore engineer at the University of Illinois who again through a social media post discovered Nagasravya and Vikram. Piyush was Nagasravya's junior at ISM. The company they formed was called Aami (‘ami’ in French means ‘friend’) and so was their NLP device. The four founders have invested a little less than Rs 3 lakh on their idea and have demonstrated the robustness of their product at SAP Labs and places like FICCI in Delhi.

The product is built on Python and C++ using open-source libraries like OpenCV and Tesseract. The four founders say that their product can identify text of variable sizes, fonts and orientation.

"It costs less than the commercial solutions currently available in the market," says Vikram, Co-founder of Aami. The best Braille reader machine costs $13,000 and the cheapest ones are around $1250. Aami is supposed to be one-tenth of that cost.

The company's product is still in the R&D phase and iswaiting to be signed up with hospitals and schools to spread the idea of using such a product for the blind. The product is worn on the index finger when the magic begins. Its powerful camera (working with software that behaves like the eye and the brain) reads every word in a jiffy. The product works on battery and for an hour's charge the device performs for over eight hours. It is also connected to an inbuilt speaker which reads out words to the user.

Several of the IoT companies in the market today, among which IoTranic, Altiux and Cooey are a few, are Aami’s competitors.

"Any company needs to validate the product in the market and only then will they be able to figure out the next phase of the product," says V Ganapathy, CEO of Axilor Ventures.

It would be nice to see Aami progressing beyond the idea phase, and to achieve that, the four entrepreneurs are in talks with a few companies to build a pilot case study to make reading easy for the blind. Let Aami be their friend.