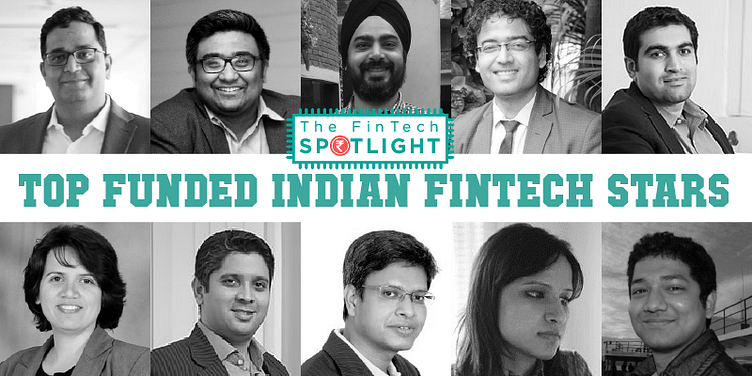 Technology is disrupting the financial sector at an unprecedented pace. From bank transfers, to payments, to loans, each financial function today has a strong play of technology, with more scope for disruptions.

That startups are tapping into this potential is evident, especially from funding patterns.

Moreover, the government also seems to be taking notice of this space. The National Payments Corporation of India (NPCI) launched its interoperable payments system, Unified Payments Interface (UPI), earlier this year. Further, the RBI is looking to regulate the P2P lending platforms and get them to register as non-banking financial corporations (NBFCs).

With the buzz only rising, here are the top 13 fintech companies in terms of funding received in the last two years:

In February 2015, Alibaba-backed Ant Financial Services Group and Paytm’s parent company One97 Communications announced an agreement which saw Ant Financial take a 25 percent stake in One97 to support the growth of its mobile payment and commerce platform in India.

However, a funding of $575 million was supposed to take place in two tranches. In March, One97 had raised $200 million and was supposed to meet the targets for the second one.

Alibaba then entered the company to invest in the second tranche, along with Ant Financial (Alibaba’s payment arm).

However, Paytm put up a requirement of a bigger tranche and Alibaba Group agreed to pump in $500 million instead of $375 million, taking the total investment to $700 million.

This makes Alibaba Group the biggest stakeholder in One97 Communications, owning 40 percent of stake in the company.

Further, news came out in February 2016 that Paytm was looking to raise $400 million by June to help with the launch of Paytm’s new payments business, Paytm Payment Bank, although this wasn’t confirmed by the payment major.

Existing investors Sequoia Capital, along with Sofina and RuNet, also participated in the round.

In April, e-commerce marketplace Snapdeal acquired Freecharge for a cash-plus-stock deal, with the majority of it in stocks and only a small part in cash.

However, FreeCharge remains a separate entity from Snapdeal.

In April last year, the company had raised over $25 million in multiple Series B tranches led by Tree Line Asia. Other investors in the round included Cisco Investments, American Express, and the existing investor, Sequoia Capital.

Early this year, MobiKwik had raised $50 million in a Series C round led by Japan’s payment gateway GMO, and MediaTek, a Taiwan-based semiconductor company. Existing investors Sequoia Capital and Tree Line Asia also participated in this round.

Area of operations: Online marketplace for loans and insurance products

The platform for small business loans raised a Series A round of $10 million from Saama Capital, Mayfield Fund, angel investor Shailesh Mehta, and Ashvin Chadha.

It was reported that the Gurgaon-based digital lending platform had raised $40 million in a round led by PremjiInvest, Wipro’s personal investment vehicle.

In March 2016, media reports emerged that PolicyBazaar’s parent company, ETechAces Marketing and Consulting, had reported a loss of Rs 71 crore.

The Bengaluru-based company had announced raising $13 million in Series A financing to support its growth. The round was led by SAIF Partners and Sequoia Capital, with participation from existing investor Aspada.

The digital finance company announced raising $25 million in a Series B round which was led by Creation Investments Capital Management LLC. There was also participation from its existing investors Sequoia, Aspada, and SAIF Partners.

In the past three years, Capital Float has disbursed close to over Rs 250–300 crore and has over 1,000 customers in 40 cities across the country with interest on loan amount varying from 16 to 19 percent.

In this round of investment, Accion had put in $12.5 million, LeapFrog Investments spent $9 million, and Lok Capital invested $3.5 million.

Area of operations: Payments, outsourcing ATM services to large banks in the country

Then, Mswipe’s proprietary solutions were already in use with more than 25,000 merchants across India.

There are other notable companies in the space which picked up considerable funding last year. Missing the mark was Ezetap which raised 150 crore approximately $23 million) last year. There are also companies like ItzCash, which received a Rs 100-crore investment commitment from its promoter Ashok Goel, and Loylty Rewardz which raised Rs 120 crore in investment last July.

Clearly, payments and lending are two categories which have been top sellers in the fintech space. Over the past two years, there have been 23 payment companies (including mobile payments) and 26 lending firms which have been invested with more than a billion dollars in funding, says YourStory Research.

Another interesting investor which keeps popping up is Sequoia Capital, which has invested in mobile wallets Citrus Pay and MobiKwik as well as loan marketplace BankBazaar.com. There is also SAIF Partners which is investor to Paytm and Capital Float.

Therefore, it seems as if the investors have finally woken up to the potential of financial technology in India. Other technology sectors like banking, e-tax filing, and loyalty management, are also picking up in terms of investments.

Thus, 2016 will see the number of funding deals in alternate fintech technologies rising and matching up to the lending and payments space. This is because users are getting increasingly comfortable at using technology to automate mundane tasks such as task filing.