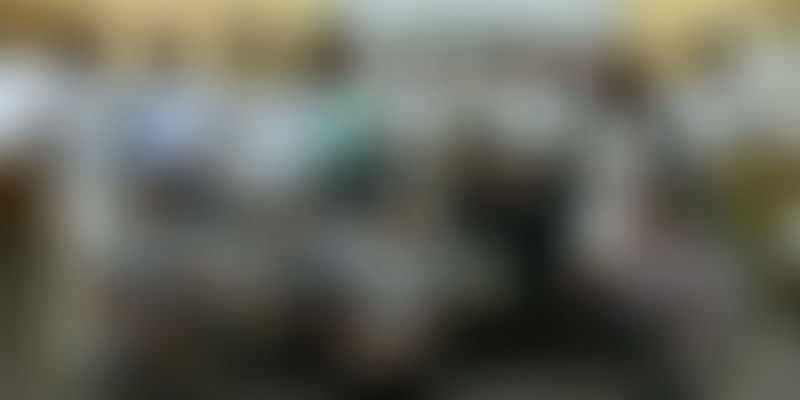 Hailing from a farming background, Patna-based Shashank Kumar, was always familiar with the troubles of farmers. It was this IIT Delhi alumnus’ interactions with farmers on his visits home that led to him finding out the degree of their unhappiness regarding poor income generation.

He then worked with Beacon Advisory Services for two-and-a-half years, interacting with clients regarding supply chain, retail chain, and FMCG. It was during this stint that he became interested in the hurdles institutional buyers face in procuring agricultural produce directly from the farmers, and ended up translating this gap into a business opportunity.

Shashank started FarmsnFarmers (FnF) (registered under the Society Registration Act 1861) in 2010, and encouraged farmers to produce more lucrative crops by providing information on cropping patterns and how to market the agri produce, thereby maximising the farmers’ profit per unit area.

The frequent engagement with farmers threw light on the difficulties small and marginal farmers face at each stage of the agricultural value chain. What caught Shashank’s attention was the dependency of small farmers on multiple channels for their various agricultural requirements— crop advisory, information, agri input, market linkage of farm produce, and how they experience low productivity and profitability due to scarce value chain services.

Adding to their woes is the huge gap between farmers and various agri-based stakeholders such as input companies, manufacturers, institutional buyers,and financial institutions. Shashank (30) says,

There is no structured way how direct communication with farmers can be established for customised crop production or feedback of seed or other input.

To ensure small farmers get access to holistic agri services hassle free, they formed Green Agrevolution Pvt. Ltd in 2012 and eventually came up with the DeHaat concept to provide last mile delivery of 360-degree agri services to farmers.

Soil testing, crop planning, agri input, farmers’ training, crop advisory based on input purchased, relevant information, and market linkage of farm produce are some of the services it offers. Each DeHaat caters to upto 1,000 farmers in a catchment area of six to eight km and is run by local micro-entrepreneurs (also called vendors)and Farmer Producer Organisations (FPOs). The startup gives the vendors a tablet equipped with an application capturing farm-related queries and provides holistic solutions and agri inputs (which are 10-12 per cent cheaper than the market).

An ICT-based platform, DeHaat serves as a marketplace which connects small farmers to their various needs —seeds, fertilisers, equipment, crop advisory, and market linkage through a network of micro-entrepreneurs.

More than 400 agri inputs have been listed so far. DeHaat provides farmers with frequent crop reminders in the form of voice calls in local languages. In this way, they are informed about the right dosage of input as well as the best prevailing management practices of crop and pest management.

The platform also gives farmers the flexibility to contact respective micro entrepreneurs to gain knowledge about various seasons’ pest control. The DeHaat application can capture crop- and farm-based queries which are s converted into solutions by the R&D team. Lastly, farmers bring the produce to their respective DeHaats and get connected to more than 50 institutional buyers (FMCG players, retail chains, and exporters) listed on the platform.

With DeHaat’s toll free number, farmers can register queries, which leads to the respective DeHaat centres/micro-entrepreneurs, and nodes getting notified. The company has set up nodal offices with storage facilities in different zones, all of which provide operational and technical support to DeHaat micro entrepreneurs. Each node has the capacity to cater up to 25 DeHaat centres and micro-entrepreneurs.

At present, they have five nodes in Bihar and Odisha and 30 DeHaat centres catering to 10,200 farmers. Geographically, they have covered 11 districts of Bihar and two districts of Odisha followed by a few pilots in UP and farming areas around Delhi-NCR.

The consistent focus on innovation appealed to farmers and yielded effective results on farming produce. Highlighting a few impacts on the agricultural output, Shashank said that farmers saved 10 to 15 percent expense on purchase of agri inputs, witnessed 20 percent increment in farm productivity, and12 to 15 percent better discovery on farm gate price. The farmer version of the DeHaat application is going to be launched soon, given the 10 percent smartphone penetration in rural areas.

Green Agrevolution’s revenue stream involves marketing of farm produce (which according to Shashank generates 70 percent of revenue), and selling agri inputs and advisory. It claimed to have achieved a top line of Rs 7 crore in FY 2015–16, while the first quarter of FY 2016–17 witnessed a consistent revenue of Rs 1 crore every month.

The current size of its team is 32. After being bootstrapped by the founding team till 2014, the company recently received funding from NABARD under the Rural Innovation Fund (RIF). In 2015 they raised Rs 2 crore from an angel investor and are   now looking to close the next round for $2.5 million in the next two to three months. Green Agrevolution aims to establish a network of more than 350 DeHaat micro-entrepreneurs in Odisha, UP, Rajasthan and MP.

Where is the agriculture sector heading?

According to a report by the India Brand Equity Foundation, India's foodgrain production has increased marginally to 252.23 million tonnes in the 2015–16 crop year. GDP of agriculture and allied sectors in India was recorded at $259.23 billion in FY 2015 as compared to $132.71 in FY 2014.

However according to report by FICCI, farm mechanisation in India is 40 percent against the 95 percent in the US and Western Europe, 80 percent in Russia, 75 percent in Brazil, and 48 percent in China.