Handmade in Mysore, Earth Loaf is spreading the chocolate love 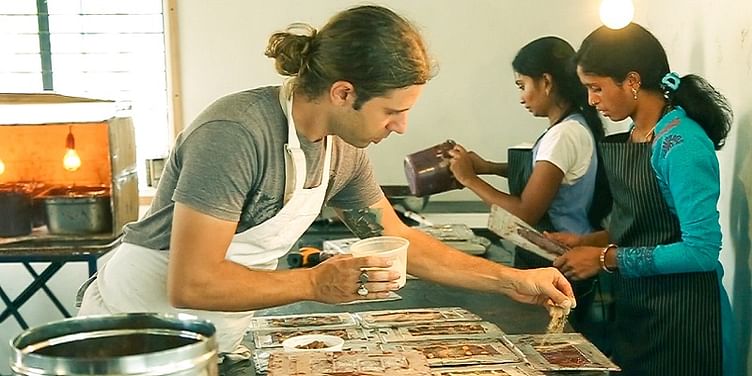 Although many things make travel wonderful, one of its most fascinating features is its potential to open doors one had never even thought about. David Belo and Angelika Anagnostou experienced much the same thing when, on visiting India in 2013, they found high quality cocoa growing in Karnataka. Although David had trained himself as an artisan bread baker and pastry chef, chocolate was a new experiment.

The beginnings of Earth Loaf

In 2010, David had set up Earth Loaf in London with the aim of producing handmade organic artisan country bread and raw vegan confectionery. When he decided to shift to India, Earth Loaf Artisan & Raw Pvt. Ltd. was incorporated with a focus only on chocolates. There were a few reasons why David took this step. “Firstly, I wanted to put the wonderful Indian cocoa on the global map. 90 percent of cocoa is used by large corporations like Nestle, Cadbury, and Campco whereby the appreciation for the raw material is lost,” says David. Earth Loaf chocolate is single origin with all cacao being sourced from India's south west coast, predominantly from farms in Karnataka, and a minority in Kerala. The second reason David wanted to create Earth Loaf was to show that something like making chocolates can also be a wonderful career. “I was astonished to see the number of engineers I met and it would be nice to have a more open space for creative pursuits,” says David.

Earth Loaf makes chocolate with emphasis on quality rather than quantity. “We are selling on average 150–200kg per month at present,” says David. It is an artisan and raw social project dedicated to spreading wellness through unifying people with nature, and craftsmanship with creativity and nutrition. “All Earth Loaf products are handled by hand for as much of the process as is possible, from the cacao bean to tempering and wrapping,” says David.

Earth Loaf’s cacao comes from the single estate of Varanashi Farms in Karnataka’s Dakshina Kannada district. The estate was India’s first to be organically certified, and supports in excess of 300 other farmers with organic farming methods and certification. Following the bean-to-bar movement, it gives the chocolate maker the kind of influence over his chocolate enjoyed by a winemaker or artisan bread baker.

For any such venture, the question of pricing always pops up. Earth Loaf chocolates are priced at around Rs 270 for a 72gm bar but if you bite into one, you’re bound to sit back and applaud the folks. Earth Loaf chocolates are distributed via organic stores across the country and they also have an online store. When we asked David for his view on pricing, he said, “For us to make chocolate that is flavourful, organic, and which retains the health benefits naturally present in cacao, we cannot product chocolate at the economy of scale and price point of commercial or candy chocolate for the following reasons:

And these are the things which are probably at the heart of many organic initiatives. At one point of time, organic was the only way mankind knew, but the last couple of centuries have given rise to this globalised, standardised world where a large chunk of us are moving towards creating uniformity. But in this race to have things under control, there is also a realisation to decentralise a few things and have smaller self-sustainable ecosystems.

The world of chocolate

As far as chocolates go, it is a massive $83-billion-a-year business which, according to World Bank figures, is a value larger than the Gross Domestic Product (GDP) of more than 130 nations on earth! (source) Most of the consumption is driven by Europe, but countries across the world are showing an increasing appetite for chocolate. And for this, it’ll be necessary to have more initiatives to work closer to the source of the cocoa and come up with alternatives for people across the spectrum.

There are other players like Mason & Co., Bean Therapy, etc. alongside a host of other people moving towards making chocolate the beautiful way. On the other side, there are also more popular mainstream stories like Pulse Candy which went on to make a revenue of Rs 100 crore in eight months. Consumers and makers may have their own personal choices, but it’s heartening to see efforts catering to all.