A doctor- entrepreneur who was invited to meet Obama, Sunita Maheshwari rewrites innovations in health-tech 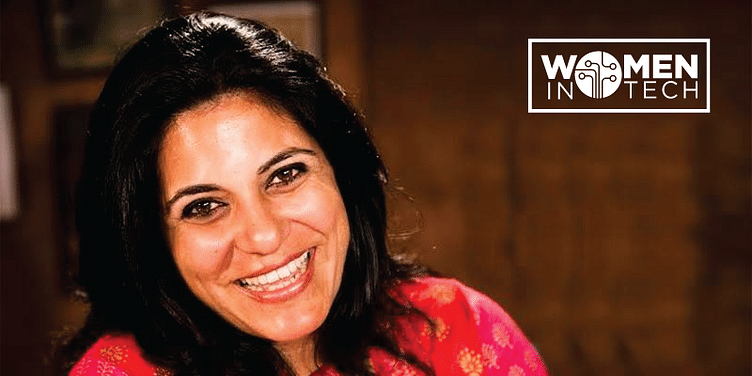 Sunita Maheshwari calls herself the ‘Chief Dreamer’ at Teleradiology Solutions (TRS), a 13-year-old health tech company she co-founded with her husband. Disrupting healthcare sector by using technology for diagnosis, Sunita was a revolution in herself. But the doctor-turned-healthcare entrepreneur says that entrepreneurship happened by accident. It was medicine that was her love.

Sunita, 50, is a paediatric cardiologist, originally from Hyderabad, where she did MBBS at Osmania University, following which she did post-graduation in gynaecology at AIIMS. Sunita then went on to do Pediatric Cardiology at Yale University. Together with her husband, Arjun Kalyanpur, Sunita returned to India in 1999. An important chapter in India’s healthcare technology was to begin.

Bengaluru was an easy choice due to the beautiful weather and cosmopolitan culture. But for three years, Arjun could not find a job here. “A radiologist trained in AIIMS, Yale and Cornell, he was over qualified. So he continued as a faculty member at Yale,” she recollects.

After too much travel between India and the US, Arjun was offered to work from India. Although India had too many call centres and BPOs, teleradiology concept did not exist in India at the time.   “We decided to set up a small company from home for our university. I managed the company along with my full time job at Narayana Hrudayalaya,” says Sunita. Today, TRS is the largest teleradiology company in India.

When they started off in 2002, they were connected only to a few hospitals in the US. But soon, Singapore Health Ministry contacted TRS, and a high powered delegation visited their home-office in Whitefield. The deal with the National Healthcare Group of Singapore took three years to materialise – by that time, TRS had grown from $1,00,000 company to $1 million. “They are a billion dollar company. I asked them why they were even approaching us, they said: ‘We trust you. You are building something great. You are transparent, ethical, it does not matter what your size is’. With our help, they set up Singapore’s first teleradiology,” recollects Sunita.

But Sunita and Arjun were keen to provide their service in India. Today, TRS works with hospitals in 60 rural areas – including in UP, Kashmir, Chhattisgarh, etc. Outside US and India, they serve in Africa and Middle East too.

“Even if a hospital has a radiologist, he/she will have to be available 24 hours for diagnosis. We are structured in a way that our radiologists can report from multiple places – now we have radiologists in India, US, and Israel on our platform. It is a tech delivering healthcare efficiently,” says Sunita. There are online tests and reviews to ensure quality control, in addition to intensive training.

A diagnosis also demands a specialist doctor at the other end – but adequate training of doctors to be radiologists is a challenge. The idea was to use technology to successfully educate doctors and to help patients in remote areas of India and other parts of the world. TRS has partnered with Diplomate of National Board (DNB) to train all 800 PG medical students in Radiology via teleteaching in India.

In the initial days, infrastructure was the biggest challenge for them – reliable bandwidth was non-existent. “We spent about Rs 1 crore per year on internet, because all the cases were consulted live with images coming from across the globe, with about 30-40 minutes,” Sunita says.

Sunita has seen the sector growing exponentially in the last 10 years. “We have won some government tenders – we will announce it soon,” adds Sunita.

“While at my full time job, I used to reach home by 9.30 pm. I had young kids and I could not see them. When my daughter was seven, she asked me: ‘Why are the kids in the hospital more important than me?’”

Sunita shifted the timings to suit her kids better, but adds: “When I became an entrepreneur, it was easier to find work-life balance because then I was my own boss. I got home by 5.30 pm, and spent time with my children till I get them to bed, and then do international conference calls or emails afterwards.”

Sunita and Arjun’s parents were staying with them too, which Sunita says, was a great support. “I used my organisational skills at home – assigning them little tasks with regard to children, and it worked,” Sunita smiles.

Sunita was awarded 2014’s ‘Amazing Indian’ by Times Now, ‘Young Clinician Award’ by the American Heart Association and the ‘Best Teacher Award’ at Yale University. She was nominated as one of the Top 20 women achievers in medicine in India in 2009 and was featured in the book ‘India’s Most Powerful Women’ in 2016. Her most rewarding experience was getting invited to meet American President Barack Obama in 2010 in Mumbai. “He is very down to earth, easy to talk to. My learning from him was that however high you get, stay grounded,” she says.

Sunita says her biggest achievement is persistence in spite of adversity. Sunita adds: “It took us 7-8 years to start working with the government of India. Private sector is generally looked at with suspicion, we had to clarify that there is no agenda – we just really wanted to help. That’s one of the reasons why we came back to India.”

Five years ago, they set up a software company that builds TR software. “We wanted to take diagnostic to patients who could not afford it, in rural areas. So we set up a Telerad foundation in 2007 – we have run about 80,000 reports for free,” Sunita says. Sunita is still practicing part time as paediatric cardiologist.

TRS incubates two other startups in the telehealth space – Healtheminds, a telecounselling initiative for anxiety, stress and depression, and a trust fund People4people that has put up over 250 playgrounds for children in government schools in India.

A woman’s many hats

For Sunita, being a doctor is satisfying, but being an entrepreneur is exciting. She was shy as a child, but she believes that when you deal with adversities, you become sure of yourself. “We wanted to have an example of something that was successful coming out of this country – and we have done that successfully,” she says, adding that she had even read books on finance to prep herself in starting up. She also follows the British Medical Journal and attends medical conferences to keep herself updated in her practice.

Sunita believes that women should not take things for granted when they have the right environment. “We have women in workforce, although majority are in clinic and not in tech. Women get home emergencies more than men. In India, the culture has to change in terms of weaving a support system around women. Marry a supportive person – I have gone for medical conferences in Brazil for 10 days, and Arjun would see me off at the airport with the kids. We need to sensitivise our men too,” she says. Well, that’s something we can all agree upon.