Meet these 15 investors at TechSparks 2016 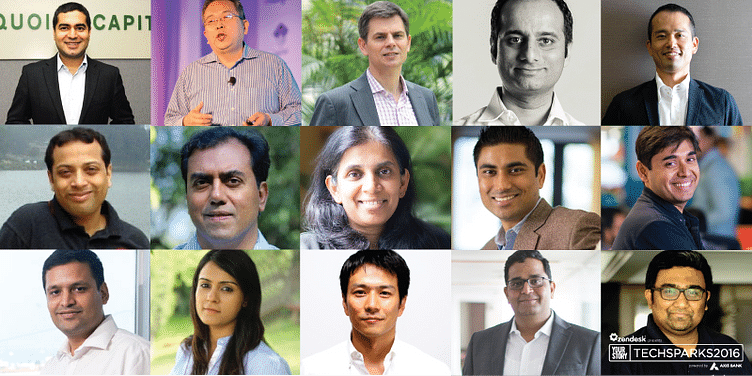 Advice, insight and investment are commonly sought by startups, and for seven years, TechSparks has connected startups with mentors, investors and established entrepreneurs. Not only do startups gain access to investors, they also get a clear idea of what their next steps should be, making it easier for startups to make a real connection with investors.

This year TechSparks is happening on September 30 and October 1. The aim of TechSparks 2016 is to showcase and promote startups and we would love to engage with you to do just that. We request you to come this year to TechSparks Grand Finale in Bengaluru on Sep 30 - Oct 1, we have worked hard to get people whom you can network with, collaborate and learn from. We have stellar speakers that include experienced product folks, M&A specialists, angel investors, VCs, industry bigwigs and many more who you can listen, meet and engage with over the 2 days. See the complete agenda here.

The Managing Director at Sequoia Capital India, Shailendra Singh has been a part of TechSparks since its inception. Singh has led over a dozen investments from seed to early growth stage across financial, consumer, internet, healthcare, services, mobile, outsourcing and technology sector across India and South East Asia.

See some of his previous talks at TechSparks here:

It starts with the founder for Shailendra Singh, MD, Sequoia Capital

Who are you? What do you stand for? Founders, establish your identity: Shailendra Singh, MD, Sequoia Capital

After 11 years of operating experience in technology and products, Harsha Kumar joined Lightspeed India Partners Advisors in 2016. An early employee at Ola, Harsha was AVP of products and led a 40-person team that drove the growth and design of core products at Ola. These included the consumer-and driver-facing apps, B2B solutions and backend infrastructure products.

Before joining Ola, she led products for Near and managed the DAU and revenue for two games at Zynga. A MBA graduate from INSEAD, Harsha has been passionate about all things tech and enjoys helping scale consumer products.

As the Founder and Director of M&S Partners, Hiro Mashita advises several growing and early-stage startups in the US, China, Singapore, Japan, and other Asian countries. He primarily provides advisory services for IPOs, operations, M&A, marketing, finance, global business expansion, and business development.

An MBA graduate from Duke University’s Fuqua School of Business, and a BA from Keio University in Japan, Mashita worked as a VP in investment banking with Nomura in New York in 1999.

Having played different roles in venture capital, business development, corporate panel, head of startups and distribution channel management of big corporations in Japan and in New York, Mashita has been on the board of several companies like 56.com in China, as well as Beauty Holdings, Euglena, Fishing Vision and SBI-Hikari PE in Japan.

Don't miss the opportunity to meet these investors and many more stellar speakers from our line-up. Book your spots now!

Founder and Managing Partner of Beenext, Teruhide Sato started his first venture in 1997. It was a joint venture with Softbank and Cybercash. He then founded BEENOS (earlier known as Netprice), one of the biggest conglomerates in Japan, with a presence across e-commerce, payments and marketplace, way back in 1999.

Both companies went public, after which he went on to head BEENOS and BEENEXT. BEENOS also runs two programmes, one in seed acceleration and the other in investments. As a seed accelerator, it has invested in over 50 companies in Japan, while the investment arm has made over 85 investments globally.

Teruhide drives the investment arm of BEENOS, besides making his own angel investments. In India, the investment programme has invested in Shopclues, Citrus Pay, KartRocket and BuyHatke, and many others, most of which have not been announced.

The Founder and General Partner of Incubate Fund, Masahika Honma’s key focus areas include commerce, gaming, mobile and digital media. Incubate Fund is the largest seed-stage investment fund based out of Singapore and Tokyo. The fund is believed to be one of the largest and most experienced investors in the Japanese market.

Beginning his career at JAFCO, Japan’s largest private equity investment company, Masahika is known for building strong mobile gaming startups – Gumi and Pokelabo. The latter, which was co-founded by Masahiko, was acquired by Japanese mobile gaming giant GREE. Masahika also has over 15 years of experience in the VC industry with organisations like Mitsubishi Corporation Group, Corporate Development and the VC division at the Tokyo office of Accenture.

A co-founder at Ankur Capital, Ritu has over a decade’s experience with corporates like Philips and Unilever. A PhD in Physics from the University of Pennsylvania and an MBA from INSEAD, Ritu has also been a part of global investing in IP-led renewable technologies. Ankur Capital’s portfolio companies include Karma Healthcare, ERC, Skillveri, Cropin, and Suma Agro.

Co-founder and Managing Partner of Blume Ventures, Sanjay Nath has over 15 years of experience in business development, entrepreneurship, management consulting, and operations. his experience spans India and the US, having worked with firms like  PwC, IBM Global Services, and Sun Microsystems. Prior to Blume, Sanjay has been an active Angel investor, and some of his top angel investments include InMobi, Svasti Microfinance, Atyourprice, Little Eye Labs and Tonbo Imaging.

He also co-founded a legal outsourcing company, Loxodrome, which has operations in Pune and San Francisco. A graduate of BITS Pilani and an MBA from UCLA’s Anderson Graduate School of Management, Sanjay has a strong global network across South East Asia, India and the US.

Don't miss your chance. Book your spot now to get a chance to meet these investors at TechSparks.

Co-Founder of Swan Angel Network, Abhishek Sanghvi is an IIM Bangalore alumnus and has 15 years of experience in strategy, technology, finance & entrepreneurship across more than 17 countries, including US, Germany, South Africa, UK and Singapore. After moving from New York to Indore, Sanghvi founded the iLEAD Group and Swan Finance Partners in India. In January 2015, he founded Swan Angel Network, which is Central India's first and the only - professionally managed Angel Investment Network.

Co-founder of Fusion Charts, Pallav Nadhani is also the Founding Circle Member of iSPIRIT. A graduate of the University of Edinburgh, Pallav also founded Seeders Venture Capital, a seed funding company, to provide seed funding to technology companies in India. The fund primarily focuses on software products, cloud-based apps, or an arena where the Internet is the key enabler.

Pallav burst onto the entrepreneurial scene from Kolkata and was a trailblazer with Fusion Charts achieving global scale. Before Barack Obama became the the US President, he used Fusion Charts' services for his presentations during his presidential campaign.

Pallav currently is advisor to HackerEarth, Akar, and Furdo, as well as a mentor for GSF and TLabs.

An MBA from IIM-A, Vinod was MD at SVB Financial Group. The focus at SVB was mezzanine debt, venture debt, and venture capital. Vinod also has solid banking experience with the likes of ICICI Bank and Citigroup. He was a part of the corporate and investment banking group at Citi. He also initiated Citibank India’s foray into the media sector and manged large corporate relationships across healthcare, consumer industries and auto.

Vijay Shekhar Sharma started One97 Communications in Delhi in 2005. It offered mobile content like jokes, cricket scores, exam results and news. One97 Communications then launched Paytm, a mobile wallet. Today, the company is valued at a little over $3 billion and the entrepreneur Sharma is worth over a Billion dollars. Over the years, the investor Sharma has invested in several companies like FactorDaily, Flyrobe, Tapchief, Innerchef, Goqii, Unacademy etc.

Naveen Tewari is an IIT Kanpur and Harvard Business School graduate. Prior to starting InMobi in 2007, Naveen worked as a business analyst with McKinsey and was also an associate with Charles River Ventures. Naveen Tewari is also on the board of directors at Paytm.

As an investor, Naveen Tewari has invested in Wooplr, Razorpay, Mango Games, Zimmber, Indus OS, Springboard, LetsVenture, and Mettl, among others.

Kunal Shah has a degree in Philosophy and even briefly pursued an MBA at NMIMS. Prior to founding FreeCharge along with Sandeep Tandon in 2010, Kunal tried out being an entrepreneur with Paisaback, a company that provided cash-back promotions for organised retailers. In April 2015, FreeCharge, was acquired by Snapdeal for $400 million.

Managing Director at Sequoia Capital since 2015, Shailesh Lakhani joined the company in 2007 as Principal. Prior to this, he was the Managing Director at Redknee, India Subsiday. He has also served as head of the global professional services group and consulted for Tata Sons and Microsoft India. An MBA from Harvard Business School, Shailesh is a non-executive director at Quick Heal Technologies and served as the Director of Capillary Technologies.

Bhavin Turakia started Directi in 1998 with his brother Divyank during his teenage years. The brothers sold their web presence business in 2014 for $160 million to the NASDAQ-listed Endurance Group. They are also selling their adtech venture to a consortium of Chinese buyers for $900 million. They intend to invest $110 million in Radix, Zeta, Flock and Ringo in this and the next financial year.

While not a venture investor, Sashank is building a business by serving high potential, but traditionally underserved SME segments. Capital Float was launched in Bengaluru as a new-age lending solution that operates online and offers unsecured loans to young businesses, manufacturers, and e-commerce merchants.

Sashank Rishyasringa co-founded Capital Float, an online lending platform, in 2013. Under his direction, the company has grown to become the largest digital lender to SMEs in India. With him as Managing Director, the company has pioneered technological innovations which have altered the lending landscape in the country. He possesses an extensive understanding of the global Fintech space and has prior experience in investments, financial inclusion and mobile technology from his time at McKinsey.

Don't miss your chance. Book your spot now to get a chance to meet these investors at TechSparks.