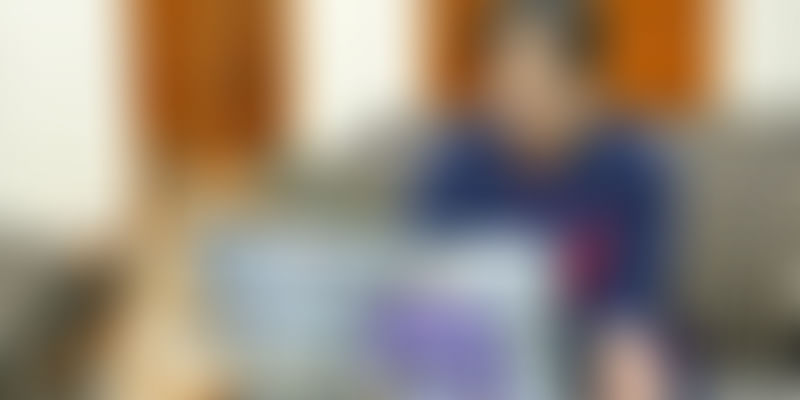 It is 4 am, and the early bird has just returned with the choicest worms to her warm nest of hungry chicks. The incessant chirping fills the Noida neighbourhood with the promise of a new day.

Nisha is up and about in the kitchen. She pours a strong cup of tea for herself to brace an intense morning that is about to follow. But she is not on call as a housewife and mother. Her children have long flown for distant shores, and it’s been a while since she has reclaimed the morning hours for herself.

Nisha spreads out a handwritten note that has all the essentials she needs listed out. With her signature effortless moves, she arranges everything on her kitchen top. The fresh spinach, coriander, and green chillies are finely chopped, the peas pureed, and the flour mix ready. Her hair neatly tied behind in a simple ponytail, she is all set to face the camera in her home-pressed crisp kurta and a warm smile.

By now her husband is also up and ready. With the camera in his hand, he gives her some last-minute instructions. As the camera rolls, Nisha sets about introducing the ingredients of the dish she is about to make. After a few awkward moments and retakes, they finally manage to capture the process of cooking the particular dish, in this case, I am assuming, palak kachori. They will no doubt eat that for their breakfast, before her husband rushes to leave for work at 9 am.

And so it was, every morning, a new dish for breakfast and a new fear conquered.

Nisha Madhulika, 56, has come a long way since the time she shot for her first video and uploaded it on YouTube on May 16, 2011.

Today, millions of people from all over the world visit her YouTube channel, which showcases vegetarian recipes. Nisha auntyji, as she is fondly referred to by her 772,739 (and growing) subscriber base that includes people not only from India but places as far away as Africa and Australia, is one of the top five YouTube stars in Asia. And hold your breath, with a total view of 236 million. Her number of views per month is more than 18 million, and the number of average views per day is between 575,000 and 625,000.

Since that early morning of 2011, she has uploaded 1,115 videos of vegetarian dishes (without onions and garlic, mind you) lapped up by new brides, students learning to live alone, and anyone who feels they need to taste her maa ke haath ka khana while living away from home. YouTube recently featured her in its Top Chefs coffee table book.

Now an average YouTuber knows what the numbers above signify. But for those who do not, it means that Nisha is a millionaire. Just on the basis of her YouTube views, she probably earns more than the men in her house (she has two sons 36 and 34 years old, who are tech entrepreneurs).

Though she says she cannot give out the amount she makes through her YouTube channel, she says, “Itna toh mein kama he leti hun jitna kisi IT top executive ki salary hoti hai (I probably earn something close to a top IT executive’s salary),” she tells me with a smile.

However, unlike your assumption that she must be making money through brand endorsements, she told me so far she has refused every endorsement request. “We get someone approaching us nearly every week, but we want to be totally responsible to our viewers and treat them as patrons, and not corporations. I am not against endorsement, but it will have to be the right product and the approach will have to be planned by us.”

Money is not the driving factor in this enterprise. I am making good progress and there's no reason to be dissatisfied with what we are already doing. How can you endorse a brand if you don't believe in it 100 percent? You can't let a brand tell you what to say, and what not to.

Nisha says because of the money she earns, “mera haath thoda khul gaya hai (I have started spending now).” She takes care to buy new things for her kitchen. “I don't brand shop when we get things for our kitchen, but I try to find the best and the most useful items.”

A team of five people have replaced her husband and sons, who had helped her set up her website. “I am eternally grateful to them. I would not have been able to turn my passion into such a big venture without their support,” she says about her unassuming family.

“My husband would leave for office at 9 am, so we had to shoot the video before that, which meant that I would wake up early and keep everything organised,” Nisha tells me over the phone. Considering none of them were trained to operate a camera professionally, the initial months were tough. They had limited time to capture the cooking process, and if not done well the process would have to be repeated leading to a lot of wastage.

In fact, they had to convert a spare bedroom into a kitchen to improve the video quality with minimum distractions.

But why on earth would a middle-aged couple sacrifice their sleep over something like a YouTube video, considered the preserve of off-the-top, crazy youngsters, who are stealing millions of eyeballs either just unboxing toys (seriously? come on) or making parodies of movies and, in the process, raking in millions of dollars?

“One thing led to another,” Nisha explains. After she and her husband moved to Noida, she quit going to her husband’s office where she was helping out with finance and accounts. “The commute was too much, so I decided to stay at home,” she adds. But unlike the other aunties of her colony, Nisha did not want to while away her time gossiping and watching meaningless television soaps.

“I wanted to do something that was helpful for people,” she tells me. So initially she started by offering tuitions to poor children. But many would drop out and she would have to begin again. Around that time, Nisha came across a food blog and she instantly took to the idea. “I always loved cooking even as a young girl. And when I read the blog that showed pictures of all stages of cooking, it blew my mind,” she says.

Without another thought she started her blog in 2007, and what do you know, she was an instant hit. “People would leave comments and feedback,” she recalls. Emboldened, she started taking greater care with her pictures, presentation of the dishes, and explaining the procedure in a simple, uncomplicated ways.

“Soon, people were asking me to put up videos of the dishes. But it took me some time before I gave in and decided to actually shoot for the videos,” she says. Nisha has not looked back since.

Her rustic charm and simple ways in which she explains her recipes endears her to her audience even as the quick and easy recipes with local ingredients made using every-day kitchen equipment leaves the viewers totally satisfied. There’s no pretension and no frills.

She tells me that the biggest challenge while shooting recipes is that you only get one shot to get things right.

You can't uncook an item, so you're running against time to get that perfect shot before you have to move on to the next stage of the recipe. It's not so difficult anymore because I've been at it since a while now, but still there are days when it's tough.

Nisha shoots two to three recipes a week, depending on the situation.

During festival time when everyone's cooking at home, I tend to produce more.

When she is not shooting, she is experimenting, reading, and preparing. “When I feel ready, I call my team and we shoot. There's a lot to do, so I don't really get much time free even on the days we don't shoot,” she adds.

“YouTube is the way I chase my passion, and age doesn't really matter when it comes to pursuing your passion. There's space for everybody, young or old,” she says.

If you have ever rolled your eyes when people have said ‘follow your passion and the money will follow’, then now’s when you roll them back. For Nisha Madhulika shows that the recipe for success truly lies in doing what you love best.