Shortlisted startups in the Qualcomm® Design in India Challenge share their progress, challenges and future roadmap -1 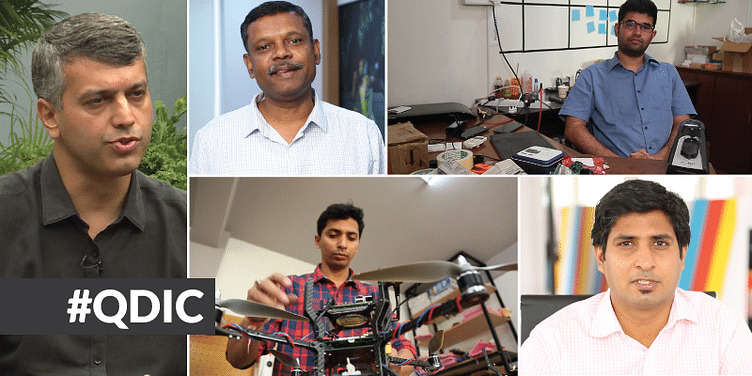 This article is sponsored by Qualcomm.

In April 2016, 10 startups were shortlisted from the hundreds that had applied for the Qualcomm® Design in India Challenge 2015-16. Four months later, these startups are intensely working on the big ideas that helped them make it to the shortlist. They are receiving technical and engineering support to develop their innovative ideas into marketable products at the Qualcomm® Innovation Lab in Bengaluru.

First, here’s a quick glance at the ideas that these 10 shortlisted startups are working on.

Here’s a quick update from five of the top 10 startups, that shows us how far they have progressed, the roadblocks that they are facing, and their immediate future roadmap.

The startup is working on an intelligent quad-rotor drone capable of executing autonomous flights in GPS-denied environments using vision-based navigation techniques. Co-founder Vipul Singh, who oversees Systems Engineering and Business Development, explains that while the product is already being sold in the Indian market, they are at a stage where they are looking at bringing about improvements – in terms of enhancing capabilities, efficiency, and flexibility – to the product. Vipul says, “We want our product to cater to varied needs – ranging from use in agriculture, to aerial mapping, to asset management.” And, this is where Qualcomm is helping the AUS team.

Vipul says, “While we are still in the early stages, where we are integrating Qualcomm technology into our product, we realise there is a huge potential attached to it. In fact, once we figure out how we can integrate Qualcomm technology comfortably, and test, verify, and find ways to scale up, this technology will have a huge say in our success.” Additionally, Qualcomm is enabling the AUS team to connect with their global partners, which is helping the startup get a better grip on the domain and marketing possibilities for their product offering.

One of the biggest challenges for the team includes the delayed and pending regulation for operation and development of drones. Vipul says, “This impacts the sector as a whole considering that most players in the drone domain are startups.” According to Vipul, the delay largely affects the investments in the sector and thus makes the entire industry non-competitive, when compared to China and US. The co-founder says, “Since the drone industry is an emerging sector, with great potential, the government should take the lead and support homegrown tech startups.”

The team is working on a solution which is a comprehensive IoT platform called HAZE that takes care of everything, from hardware design, embedded coding, and mobile apps, to server solutions. Manish Buttan, CEO, says they are working on designing the hardware modules, after which they will begin work on the software side of things. Sharing an update on how they are faring at the QDIC challenge, he says, “We have integrated the Qualcomm processors into our product and have sent the designs to Qualcomm to get it reviewed by their experts. We are excited to see what they have to say.” And, if things go as planned, Artificial Machines plans to go live with some of the products by October this year, and all of them by December end of this year.

“The device which we have developed is practically a smartphone without a display. Being a hardware product there is a lot of circuitry-related engineering within a small area. This translates into a number of issues,” says Rohan Vadgaonkar, Co-founder, Carnot Technologies.

The Carnot Technologies team is working on two products. The first is a car-based device with a neat and easy interface that communicates with car owners / users on issues regarding security, enginery and battery health, and the performance of the car. This product was released in the market through a soft launch in July and the startup plans a full scale launch by the end of October.

The other product is a bike-related device which functions on the same lines as the car-based device. This device is still in its early prototyping stage and the team is hopeful that they will have a fully functional device ready for the alpha stage testing by friendly users in the next three months.

Rohan says being one of the 10 finalists of the Qualcomm Design in India Challenge has been advantageous. “The Qualcomm team has helped us address several issues, such as those related to RF components, helping us design the device antennas better.” Support from the Qualcomm team has helped to them overcome challenges in their journey, Rohan says, “We are using certain protocols for Bluetooth communication. Here, we faced a lot of challenges especially in situations involving a moving car, where there was a lot of interference. It is on these kind of vital issues that we have worked together with Qualcomm engineers and have derived solutions.” Additionally, Qualcomm has helped the team in protecting their IP and filing patents in the right way. To sum up the support they received from Qualcomm in Rohan’s words, “it has been a fantastic ride.”

Manohar Sambandam, the co-founder of Green Robot Machinery, is working on what he says is “essentially a cotton-picking robotic machine,” to address the shortage of farm labour. He says, “The challenge for us is to bring smartness into a farm robotic machine. At the moment, we have taken a step in that direction by integrating machine vision into robotics.”

The team has already completed a round of proof-of-concept. Manohar says, “I am a farmer as well. We have already tested the machine in my farm.” Like the other teams, Green Robotics has encountered many challenges, the top ones related to technology and getting people to join his team full-time. Qualcomm is providing engineering support to address some of the technical challenges. Manohar is upbeat about Green Robotics’ progress in the challenge. He says, “I am confident that by March 2017, we will have a great product to showcase in the market.”

“With Qualcomm’s support we got a big boost, especially with technology,” says Rajesh Manpat, CEO. iFuture Robotics is working on an industrial robot Called the Arkrobot that has been designed to primarily move inventories within a known environment, while also combining data analytics and computing, to deliver unprecedented throughput efficiency.

Rajesh says, “We wanted to change the platform that we were working on, but we were finding it challenging because we didn’t have the right technology partner. And, that’s when QDIC happened.” Qualcomm’s support has not only provided them with the technology platform, but also chip sets. “The Qualcomm chip sets which were given to us had some key embedded protocol required for the robot.” At the moment, the team is working on developing some of the hardware protocols that enables the robot to communicate with the servers.

Rajesh says, “Robotics and automation, being very new subjects in the Indian market, there is low level of awareness and acceptance. This makes it hard for us to crack the Indian market.” He shares that while this a long-term challenge and will require on-going efforts, Qualcomm is enabling them address this challenges by providing industry connections which will help them find opportunities to deploy their robots.

Aarav Unmanned Systems (AUS): This is a very advanced drone company and already has a robust solution. We are supporting them in any area that requires our help.

Artificial Machines: This hardware based startup is almost ready with their prototype.

Carnot Technologies: The Qualcomm team is working with them on multiple fronts, ranging from help with business development to hardware support. The Carnot Technologies team is aiming to build a product from scratch.

Green Robot Machinery: They are using one of Qualcomm’s reference platforms and are building their algorithm, and are also getting the required technology support and expert advice.

iFuture Robotics: Qualcomm has provided them a lot of hardware and software support. They are well on their way to adapting our platforms into their solution.

Watch this space to know about the progress of the other five startups part of the Qualcomm® Design in India Challenge.