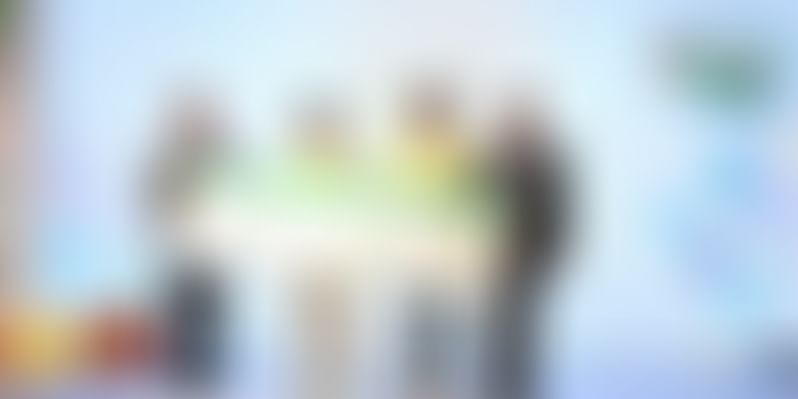 “Innovation runs in India and companies which innovate will be ahead of the curve,” believes Mohan Sekhar, Senior Managing Director and Lead, Delivery Centres for Technology in India for Accenture.

It is this very culture of constantly being ahead of the curve that led Accenture to launch their Innovation Jockeys initiative in 2012. Giving young minds a podium to stand out, it is a contest inviting undergraduate, graduate, and post-graduate students across Indian colleges to infuse the system with innovative thinking.

Until now, the initiative has garnered more than 9,300 ideas from across more than 100 Indian cities. It has also seen the launch of successful startups in the social sector.

One of these startups is CareNX Innovations, which saw its full-blown inception after participating in the initiative in 2012–13. Founder Shantanu Pathak tells us that the idea was conceived after a personal experience. He says that India sees an annual death rate of 55,000 expectant mothers due to either incorrect treatment or unawareness about them being under high levels of risk.

But Shantanu says that it was getting to understand the scope of the ecosystem from the initiative, along with the business practicality given from the judges which helped them shape the business right.

How does Accenture drive innovation?

Mohan further states, “New business models are evolving which would guide the way we work. And thus will be completely new and disruptive in form.”

He states that innovation is at Accenture’s core, which leads them to working with the biggest players in the industry, who are always seeking newer technologies.

So how does innovation run in a behemoth like Accenture? In multiple strands, Mohan explains.

The fifth season is here!

With the fifth season of Innovation Jockeys rolling in, the contest required the young guns to bring ideas which create a positive change in society through three broad themes:

This season, the contest garnered close to 3,600 applications from 800 engineering colleges across India.

The winners of the challenge get the opportunity to visit either the Accenture technology labs in Dublin, Ireland, Silicon Valley in the US, or the Accenture Internet of Things Center of Excellence in Singapore.

According to Mohan, this season the contest has also evolved, allowing Accenture to work with select participating teams for six months in house, to develop their idea further.

Explaining the core reason to conduct the contest, Mohan iterates,

“We bank on these individuals and colleges for talent. Further, these initiatives help us understand the technology landscape in these institutions. So through these practices we also ensure that the best of talent comes to us and doesn’t go to our competition.”

Following are the 16 ideas which made the cut this season:

For a digital India:

To tackle the rising air pollution, Airpure is a pollution surveillance system that not just monitors indoor and outdoor pollution levels but also gives personalised health risks and suggestions based on one’s health conditions, gender, and age.

This will further provide valuable data for research to help the government form informed policies to reduce air pollution levels.

Wi-Pool is an app which facilitates WiFi pooling. The students here focused on the drawback of WiFi not being mobile, with its connectivity limited to a certain distance. Trying to solve this problem via shared WiFi, the solution plans to make the internet reach further in disconnected rural areas.

The idea behind this system is to automate farming through IoT and lending farmers with adequate knowledge in agriculture. Further, through the use of various sensors and techniques, the system will deploy actionable insights which will help increase crop production.

This can include various tasks such as ensuring the right water levels, temperature etc. The system will also have alternative solar and wind energy to charge the battery, if solar power isn’t available. Software used: Arduino Technology. Embedded and later implemented with IoT and natural technology from the environment.

The solution focuses on delivery of life-saving medical supplies using heavy-duty payload lifting multirotors or drones. On receiving a distress call from the victim or patient, the base station sends out a multirotor after tracking down the location of the signal. Within a matter of minutes, the payload is dropped off at the required location and the octorotor automatically returns to its base.

To prevent malpractices and corruption:

The BIVIDA platform aims to open up public contracting through disclosure, data, as well as blockchain technology. This, in turn, provides transparency to the bidding process, preventing fraud. The decentralised platform also prevents any kind of manipulation and looks into maintaining transparency.

This system aims at providing an open platform for sharing cases of corruption, to which an extra layer of artificial intelligence is added to predict, prevent, and solve such cases faster for both individuals and organisations.

It takes crowdsourced data as input, (social media and online forms) processes it (through machine learning algorithms), and provides structured information as output to fight the reported case of fraud/corruption. Furthermore, through the app, they provide previous data, updates regarding lawsuits, and legal assistance for the same.

Works on blockchain architecture, which means there is a distributed database that is not vulnerable to any kind of tampering.

Making it useful, each record/transaction included in the blockchain is signed by a certain authority (for example, revenue department), which means immutable proof of record is possible. Basically, if your records are fraudulently manipulated by some attacker, you can prove that the older record you have is a valid one by verifying if the hash of this record is present in the blockchain.

The solution is to provide an anti-corruption railway penalty ticket collection system. The system comprises a QR code system, android app, and a central web server. The QR code system allows the system to catch ticket checkers which are charging high for penalties made by passengers.

The proposed solution developed is an app-based user registration and authentication system which will serve as an on-the-go, always ready, highly secure method of user authentication for microfinance institutions working in rural areas.

Kawach is a comprehensive solution for corruption or malpractices. The application uses Aadhaar API that checks the person’s Aadhaar UID Number with the response being valid, fake, or not found. In Kawach, this is used for verification of a person to stop the malpractices.

The issue the app is trying to address is the lack of common or accessible platforms to not-so-privileged women seeking earning opportunity which shall lead to their economic empowerment. The aim is to meet the demand of services by providing a meeting point to the buyer and seller of such services.

Began as an objective to solve the problem of indoor air pollution occurring due to traditional cook stoves used in rural parts of the country. These regions are not yet facilitated with LPG and hence use biomass as fuel. The Project Aanch team has innovated a modern smoke reducing cook stove design and built a sustainable business model around the product to tackle problems of affordability and accessibility.

Further, local women are transformed into entrepreneurs who make the stoves and sell them on their own, in their surrounding localities.

To prevent anti-social elements and bring about social security for children and women, these undergraduates from Kolkata have created a bag which by itself takes pictures and posts them along with GPS location on its own social account, thereby sending notifications to parents on their smartphones after every T (every 5, 10, 15 or 30) seconds.

The winner of the grand prize was the SMS-Based Mobile Biometric Authentication System with the jury choice award going to Griwaditi.

On the other end, Kawach won the popular choice award with Smart Farming System winning the employee choice award.