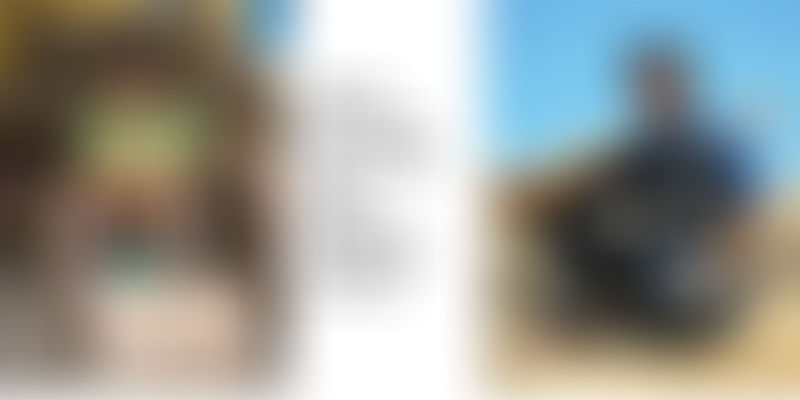 There are a few things that always make me wonder. One of them is how incredibly mouldable we are. We are always a work in progress, always a story in completion. Every day, we are shaped by endless influences. And when we truly allow each colour to add onto us, what’s created is something special. This is the story of a boy who chose to follow signs, allowed life to lead him and became adept at creating a musical instrument that some say is the oldest in the world.

Named after the Shiva temple in the vicinity, Bhagsu is now a bustling tourist town in Himachal Pradesh. But look closer and you may still find some hints of a village hidden behind the cafes and the cars. From the tales we’ve heard, Bhagsu was once a gypsy town in the truest sense. Dusk to dawn, the village would see raggedy travellers gathering at random places, singing and dancing. Their instruments and their tunes were all the excuse that the villagers needed to celebrate. Much has changed today, but the legacy lives on through those who have seen the village in its vagrant avatar. One such person is Bhollu.

Bhollu is celebrated among travellers as a skilful didgeridoo maker. He’s 29 and has been creating smiles through his craftsmanship for the past seventeen years, having started when he was just twelve. Always experimenting with new materials and techniques, he is a perfect example of what happens when the creator falls in love with the created. When he’s not making a dig, he’s sitting somewhere playing one.

It intrigued me. How did fate conspire for a small boy in Himachal to discover an instrument from aboriginal Australia? So I finally asked him one day, and this is his story.

“When I was about nine years old, Bhagsu was visited by mostly European tourists. My family, like many others, ran a homestay for them. One day, a tourist came in with an unusually long and oddly shaped bamboo staff. Every morning, he carried it to the fields, saying he was going to meditate. This was enough to make us jump up and stealthily follow the stranger. We sat behind the rocks whispering softly, when the man suddenly put the staff to his mouth and made a pulsating, monotonic sound. We ran through the fields screaming and shouting!”

Bhollu laughed and continued, “But I was still curious and so, I followed him for a second time. I was smitten, how could a simple bamboo structure make such a sound!”

This traveller became the connecting point between Bhollu and an instrument from thousands of miles away. He carefully answered all the questions of a curious village boy and then bid him goodbye.

“The man left, but he sparked something inside me. A year after that, I had a passing thought that maybe I should try and make a digeridoo for myself. Why not, it would be fun! And that’s how it started. There was no internet back then, so it was a lot of trial and error. But I managed to make something close to what I had seen. Then one morning, a fakir passing by heard me play this instrument. He stopped and immediately asked if he could buy it. I had never sold one before but he willingly paid two hundred rupees for it. I was just twelve then, and you can imagine how exciting this was”.

“When I got to work a second time, my family noticed and asked me to focus on my studies, and I conceded. I had an active student life, actively participating in painting, yoga and playing the Indian flute. This went on for a few years. But life has a mystical mechanism for course-correction. When I was sixteen, my uncle got some bamboo shafts for repairing the roof of his home. I immediately felt like making a digeridoo again. It had been a few years now and it took some work. But it happened. This time again, a traveller passing by asked me if I wished to sell it and paid seven hundred rupees for it.”

“It was not a coincidence anymore. I knew that I could make a living through making and selling didgeridoos, but then again, it felt like much more than that. It was my calling, and to ignore it would be unwise and unnecessary. So I started planning my days, making sure I studied and spent time on improving my crafting techniques. Today, it’s been almost fourteen years,” he smiled and nodded gently.

We put our discussion to rest and sipped slowly on some tea. Along with didgeridoos, Bhollu now also makes Cajón – a percussion-based drum, originally from Peru. And there’s also another instrument he’s been quietly working on, but has requested not be mentioned just yet.

The cup of tea was over and so were the words. I bid goodbye, promising to share the details of his story, if and when it got published.

It is normal to meet people through places, but rarely do we meet places through people. And I can say, from personal experience, that the latter is far more fulfilling. I’ve met Bhagsu through Bhollu. And through him, I’ve met not just her today, but all of her yesterdays as well.

It depends on the wood. There are hard woods and soft woods. Bholu has experimented with didgeridoos made from cactus wood, eucalyptus and poplar. A didgeridoo can be made out of any wood. We start by getting a good piece of wood and then decide on the sound tone that the player wants. When you make one of hard wood, it’s cut into two parts along the centre and is carved from the inside based on the note. After carving, it is smoothened using sand paper and cleaned. This is followed by applying a coat of lacquer.

The next day, it is sanded on the outside. Another round wooden ring is added to the rear end of the did to avoid cracks. Then, bee wax is boiled and poured inside the didgeridoo. This helps in keeping the tones warm. Using too much lacquer gives it a plastic finish, which doesn’t look good and also disturbs the warmth of the tones. The instrument is then cut from the top and checked for tones.

If you use a soft wood, you heat an iron rod and use it to create a cavity in the wooden piece. Here, it need not be cut into two pieces and glued back together. The sound of the digi depends more on the channel for air flow. It is easy to create a dig out of bamboo as it naturally has a cavity running through the centre.

People often ask Bholly his favourite but he says, "For me, they are all special, and I cannot choose one over another. It’s special when people come and participate in making the instrument. Most of the people who come here ask me how to make it and work on their own instruments. That is always special, when you make your own."

Bhollu's story resonates very strongly with our philosophy of Slow Tech and how thigns should be done. If you'd like to get in touch with Bhollu or know more about getting involved with music at the foundation level, write to us at slowtech@yourstory.com.