Employee engagement: What can we learn from our great epics 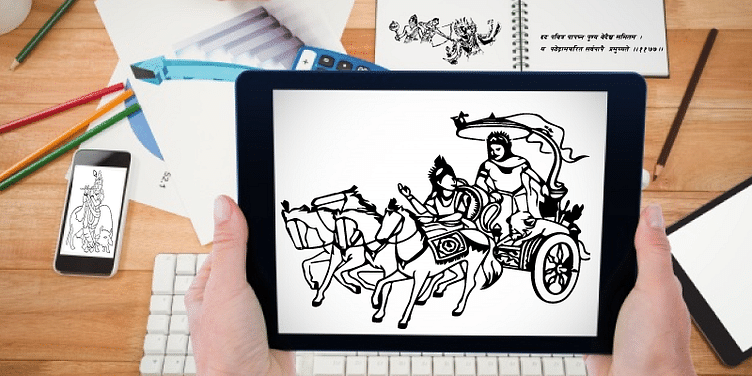 I grew up with a love for stories, especially Indian stories, be it the Amar Chitra Kathas, Tinkle or loveable Chacha Chaudhary. These were my staple as a child - may be because it was about people who you could instantly connect to. My fascination for Indian mythology was an outcome of this and also a father-figure who was a master story teller. He would come home every summer vacation and it was a ritual after dinner for all of us to sit on mats on the floor, while he sat comfortably on a chair enthralling us with his magical stories.

Let me attempt to draw some parallels between Indian mythology and the idea of employee engagement - after all mythology is all about ideas. They are not stories in absolute form and hence you find so many interpretations of the two great Indian epics – Ramayana and Mahabharata.

At a very fundamental level, who is a happy and engaged employee? Someone who is willing to go ‘beyond’ what is one’s job description and do it with immense passion. Modern management calls it discretionary effort. So what makes someone ‘go beyond’?

This is what I call a ‘circle of engagement’. Organisations need to be able to create an environment where all these can happen and then employee engagement is a natural outcome.

Why do we need engaged employees? Research shows that highly engaged employees put in 50 percent more discretionary effort than others. This leads to increased productivity, innovation, greater employee retention and therefore profitability.

In the Ramayana, Hanuman was serving Sugriva as a result of the promise he made to his guru, Surya, the Sun god. Sugriva was Surya’s son and needed protection from his much stronger brother Vali. Hence, Surya asked Hanuman to protect him, as his gurudakshina/fees. Sugriva pledges support to Ram to find Sita, after Ram helps him kill Vali and makes him the king of the monkeys. Hanuman, therefore, becomes a key character in the Ramayana. What makes Hanuman ‘go beyond’ is the fact that he saw a purpose in what he was doing. He truly enjoyed what he was doing and he knew he could add value to Ram’s mission on earth. To this day, he is revered for the qualities he displayed.

So how do we do create an organisation with engaged employees?

In the Mahabharata, Draupadi’s brother Shikandi was born a man but had the character of a woman. The story goes that in his past life, he was actually Amba, a princess, whom Bhishma had abducted along with her sisters, to marry them off to his brother. However, Amba refused to marry his brother as she was in love with another prince and so Bhishma let her go. Her ex-lover refused to marry Amba for having gone with another man. She returned to Bhishma asking him to marry her and was turned down since he had taken a vow of celibacy. She performed immense penance to seek revenge on Bhishma.

In the Mahabharata war, Krishna makes Shikandi fight Bhishma as he knew Bhishma would not fight a woman and also because he knew of Shikandi’s vow. Shikandi eventually kills Bhishma and avenges her past life experiences.

The greatest example of leadership was demonstrated by Yudhistra in the Mahabharata. He was not the most gifted warrior, but what he possessed was the unflinching devotion of his brothers and army. He was an inspiring leader who held each of them together. Just before the battle between the Kauravas and Pandavas, Yudhistra went to the Kaurava elders to seek their blessings. He did not hold any grudges against them and was simply following his dharma. By doing so he grew in the eyes of not only his own ‘team’, but in the eyes of the enemy as well.

In short, employee engagement is not about the HR team creating fun events, family days, kids’ day or the like. I think they are important but not the real agents for employee engagement. The real deal is being able to understand what drives each individual in the team and striving to meet those expectations.