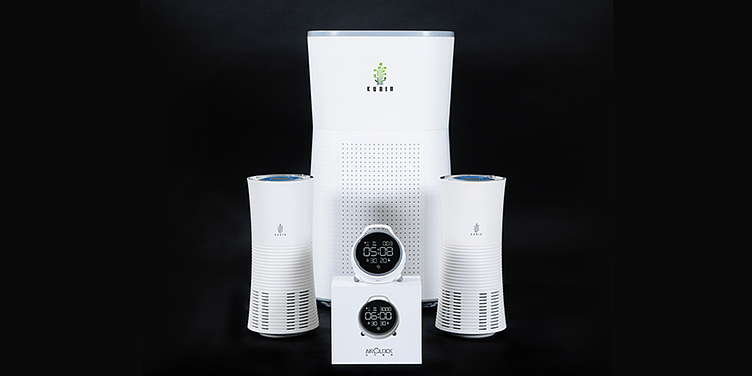 Breathing clean air is a luxury in urban areas. Consider New Delhi, it is one of the most polluted cities in the world. Air pollution has not only cost us more than 8.5 percent of our GDP but is also responsible for reducing our life expectancy by nearly four years. About 1.6 million premature deaths in India are linked to air pollution and nearly one-third of all children have lung disorders.

Air pollution is the third largest cause of strokes and risks youngsters' mental health. “We can go on quoting research findings and newspaper headlines, but the fact remains the same — air purifiers are a necessity today,” says Pavneet Singh Puri (28), Co-founder, Kurin Systems.

Hardware is in Kurin’s DNA

“We have always been hardware oriented and don’t really shy away from getting our hands dirty. Most startups these days are service oriented; this leaves the majority of the hardware market to preset players. We always felt we could change this market majority if we brought out a far superior product at an affordable price point,” says Pavneet.

While the Androidly team worked towards the new device, Pavneet and Madhur decided to do something about the deteriorating air quality in our country and formed Kurin Systems in late 2015.

Pavneet and his co-founder Madhur Mehta (27) wanted to create devices that would have a positive impact on the lives of people around them. “We have always worked towards transhumanism and wanted to be a part of this movement to better the quality of the lives of everyone around us,” adds Pavneet.

The duo spent a couple of years to research about the air, the usual pollutants, ways to get rid of them and how to go about the entire process of creation. Madhur explains,

In 2013, we launched Androidly Systems, and we created the first Android-based smartwatch. It was the first watch with the complete functionality of a hand-held mobile device, meaning it took a SIM card and acted as a stand-alone device.

As the smartwatch market saturated, the duo started to go deeper into R&D of a new device; they were working more towards augmented reality with their upcoming device. Meanwhile, living in New Delhi, and having returned returning from Melbourne, one of the cleanest and most livable cities in the world, they wanted to do something to make people breathe healthy air. Pavneet says:

The idea was always to create a smart device that solved an immediate problem faced by the common man and to disrupt the market pricing.

Soon after Androidly, the duo was invited by RSC, a firm that has created the Silicon Valley of the East in China, and introduced to FoxConn Technology Group (Hon Hai Precision Ind. Ltd.), the market leaders in global manufacturing of laptop, phone and other digital devices, whom they partnered with to create their first air purifier.

The problem of air pollution has been around for a long time, but like everyone else, we were too accustomed to our surroundings and paid no attention to the pollutants we weren’t able to see.

All of this changed in the February of 2015 when Pavneet’s nephew visited India for the first time at the age of nine months. The entire journey back from the airport was a nightmare as the child panted for air, finding it impossible to even breathe.

This led the duo to experience the severity of the problem of poor air quality in our country. With the next device from Androidly in the research phase, the founders chose to work towards creating affordable air purifiers.

According to Pavneet, the increasing levels of pollution have ensured that air purifiers will soon become just as common as the water purifiers found in households.

Kurin Systems is currently looking to launch devices across India before Diwali. Meanwhile, the company has found partners in many corporate houses ranging from law firms (Luthra & Luthra) to leading hotels (ITC group of hotels) and hospitals (Park Hospital) during the recently concluded pre-launch phase.

The Delhi-based company offers a range of air purifiers for cars, offices, and living areas. Kurin Aura for cars is priced at Rs 4,999, Kurin Atom (for offices) has a price tag of Rs 8,999, and Kurin Aeos (for rooms) costs Rs 28,999. Aeos comes with room purifier, laser sensor air quality monitoring display, processor and Wifi module along with interactive phone app.

Starting this Diwali, Kurin Systems will begin offering purifiers with three-stage filtration techniques for cars, offices, and living rooms. The purifiers are complete with laser sensor air quality monitoring and display systems that run on quad-core processors and Wi-fi modules.

Neither investment nor profitability is on the radar

Investment is not currently on the company’s agenda, and the team even claims to have turned down some offers, for the simple reason that they see it as a cause for dilution of ownership and causing founders to lose sight of the goal.

“Profitability is not a current concern for us as we strive to educate the masses. Making a dent in this problem is a mammoth task and our ultimate goal is to bring about a change in the deteriorating environment,” says Madhur.

USP: Kurin’s devices can compute while others can’t

“We make superior-quality smart home and office air purifiers. Our devices can compute, unlike any other purifier in the market. That’s not all; they also communicate with you. Your purifier will tell you the air quality (particulate matter level) inside your room and will also tell you about the quality of the air in your city,” says Madhur.

It also has a dedicated app that lets you access the device from wherever you are. The company claims to have the most advanced filtration system with four levels of filtration – High-Efficiency Particulate Air {HEPA H13} filter which collects 99.9 percent of airborne impurities, a carbon-activated filter which removes all poisonous gases along with a pre-activated filter and woven cloth that remove all pollen, dust, pet dander etc.

Despite everything, though, one question cannot be ignored: having a purifier in your house is well and good, but what is one to do when one goes outside? Purifiers cannot be carried around, and masks are of no help where PM 2.5 pollutants are concerned.

To which Pavneet has this to say:

We want to educate the consumer of the immediate threat. We feel disturbed knowing 13 out of 25 of the world’s most polluted cities are in India. Our greater goal is cleaning the air, not just in the houses but outside in the city. We are in the process of formalising a project with the government that will let India breathe healthy.