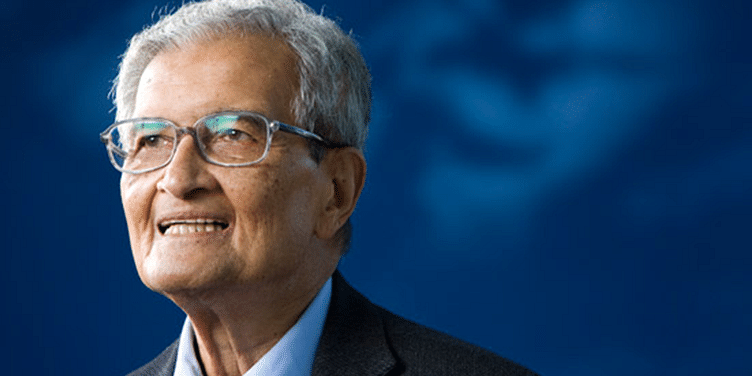 I remember one of the highlights of getting into Presidency University was the fact that I was now part of an alumni groupthat boasted names like Satyajit Ray and Amartya Sen. In my third year, I was lucky enough to have witnessed the latter in action as he visited his alma mater to discuss the interconnection of democracy, literacy and economic growth. I remember wondering how a man as subdued and polished as Sen could exude an opinion so domineering that it convinced every one of the three hundred impressionable students who entered the gates that day.

A champion for social rightsthrough every strata of a vastly divided Indian society, Amartya Sen is one of the world’s most influential economists and Nobel laureates.He pointed out that unless we improve the social conditions and poor infrastructure dominating the lives of the vast Indian public, rapid economic growth is a far off reality. Born into a family of academicians who migrated from Dhaka to India following the Partition, Sen graduated top of his class from Presidency University with a B.A. in Economics, in 1953. The same year, he enrolled into Trinity College, Cambridge, where he earned another degree. He returned to India briefly, following which he was appointed Head of the Department of Economics in Jadavpur University at just 23. Two years later, he took off to Cambridge to pursue his Ph.D. with a thesis that caught the interests of economists around the globe. From here on, he has travelled to and fro between the United States,where he has been a permanent resident for 50 years, and India,where he retains a permanent citizenship till date.

Sen was never one to occupy the board desks of leading companies, although he was more than qualified to lead them all. His interest had always been in academics and the Indian economy from a global perspective.Thus, his focus remained rooted to the same through his illustrious works and contributions. Apart from teaching at notable Universities across the ocean, including Harvard and London School of Economics, and the Delhi School of Economics and Calcutta University in India, he spent his time writing his views in books that every student of Economics has in their backpack. Some of these include Development as Freedom, Poverty and Famines: An Essay on Entitlements and Deprivation, On Economic Inequality, Inequality Re-examined, The Argumentative Indian and The Idea of Justice. His relentless contribution to the academic world won him the Nobel Memorial Prize in Economic Sciences in 1998 and the Bharat Ratna a year later.

On his 83rd birthday, we want to applaud his legendary prowess in the world of economics by reflecting in-depth about his major predictions regarding the various facets of the Indian economy.

In a report published by Quartz, Amartya Sen states that he has always been a firm believer in democracy and applauds its vast progress since Independence.He has always maintained that it is the most stable way of governance. However, he believes that unless the government focuseson improving and developing the terrible social conditions and infrastructure that plagues the majority of the Indian population, there can be no rapid economic growth. Citing Adam Smith’s 1776 prediction that separating economic growth from the quality of the labour forcewasa mistake that the British government was making, Sen says that decades down the line, history seems to be repeating itself.This is considering the fact that the current government seems to prioritise economic growth over tackling the greater and proportionate issue of unqualified labour.

In comparison with China

Although Sen believes in democracy as the best form of governance, he states that sometimes it could lead to infectivity when it comes to execution for ongoing deficiencies, although it is great for crisis management. For instance, he says that if tomorrow a flood was to hit the Bay of Bengal, then the government would ensure that the 200 people living by the coast were safely evacuated. However, in the case of, say, improving healthcare conditions, putting money into state schools and hospitals would take forever considering that substantial time would be spent in just deliberations and convincing the concerned authorities to get on board.

Contrarily, he says, China is swift to produce results.After a rapid drop in life expectancy between 1979 and 2004, China implemented policies that changed its very face.By 2009, they could bring in a scheme of universal healthcare, and by 2012, they had over 90 percent health coverage. To him,China makes much better use of the opportunities offered by high economic growth. They have expanded public resources for development purposes andmoreover, the Chinese Government’shealthcare expenditure is nearly four times that ofIndia. According to his report in The Outlook, “While India has nearly caught up with China in terms of the rate of economic growth, it seems quite far behind China in terms of the use of public resources for social support, and correspondingly, it has not done nearly as well in translating growth into rapid progress of social indicators.”

In an interview with The Hindu, Sen stated that “the NDA government had been slow to move on key reforms and even failed to deliver on the reforms it had promised, thus hampering the successful functioning of a market economy.” He believes that despite the fact the NDA government has fared better than the UPA government, India faces a setback in that we are one of the only countries in the world which is “trying to get universally educated and universal healthcare through the private sector.”On the other hand, Japan, US, Europe, China and even Cuba understood the importance of making education and healthcare widespread and universal. In light of Modi’s multiple initiatives that reportedly aim to improve the life of the everyday individual, Sen believes that these “innovative-sounding schemes” cannot take away the fact that it is extremely difficult to generate income from an uneducated and unhealthy labour-force, a definite hindrance in Modi’s plans for development growth.

For this highly acclaimed Nobel Laureate, India’s recent development experience includes both “spectacular successes and massive failures”. He says that the government and the people need to strive for an “all-inclusive growth”as well as “growth-mediated development” that focus on all aspects of society development, social as well as economic. Once the social conditions of the masses that make up the Indian labour-force witnesses a stark improvement in quality and opportunities, it will entail a positive influence on economic growth, rendering it to rise faster and more effectively for the nation in general.

To the man with the plan to change the face of poverty in India and his fight for social justice,happy birthday, sir!