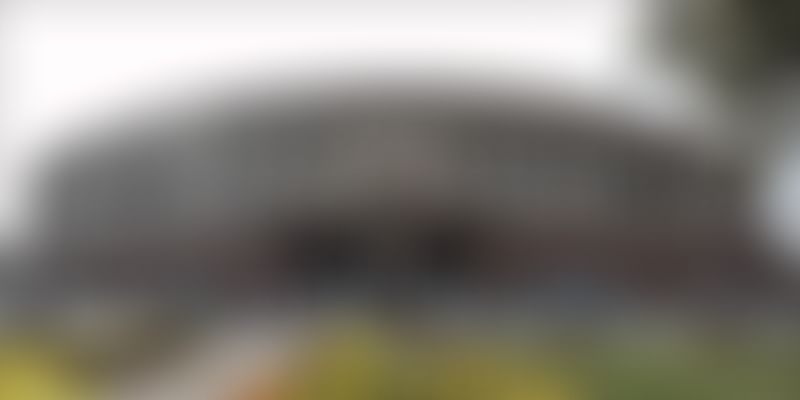 Amidst din and without debate, Lok Sabha today passed within minutes a major bill that provides a window to legalise black money post-demonetisation and a tax on that amount, triggering a controversy with the Opposition calling it a "black day" and accusing it of being "undemocratic and dictatorial".

Marking transaction of the first legislative business in the two-week-old Winter Session, the Taxation Laws (2nd Amendment) Bill, 2016, was passed by the Lok Sabha after days of total washout due to paralysis on the demonetisation issue. With the Opposition continuing to disrupt proceedings, the government suddenly brought the bill under the revised list of business showing its eagerness to get it passed immediately.

Even as the slogan-shouting by Opposition members continued, Finance Minister Arun Jaitley said the bill will give means to the Government of India to run schemes like Garib Kalyan Kosh.

I urge the House to accept the amendments, he said while moving the bill for consideration and passing.

Immediately, Speaker Sumitra Mahajan declared, "There will be no discussion". However, later she lamented that an important bill like this was being discussed without any discussion. Jaitley said the bill was brought after it came to the government's notice that some people were trying to illegally exchange the demonetised Rs 1,000 and Rs 500 currency notes. He said as per the amendment proposed, those caught illegally converting money will have to cough up 60-percent tax-plus-penalties, which will come to 85 percent. Those who disclose black money to banks will have to pay 50 percent tax, including surcharge and penalty. While they will get back 25 percent immediately, the rest 25 percent will be returned after four years.

Some amendments moved by opposition members were rejected as those required approval of the President, which could not be obtained. Two amendments by N K Premchandran (RSP) and B Mahtab (BJD) were allowed. While Premchandran refused to move the amendment as he was part of the protest, Mahtab's amendment was negated by a voice vote.

Earlier, opposition members said the bill could not be discussed before the debate on demonetisation as the measure was a follow up of the note ban decision. Mahajan said since the bill is of urgent public importance, it has to be passed immediately. Though she wanted a debate, she said "it is impossible" because of the behaviour of the opposition members.

Congress leader in the Lok Sabha Mallikarjun Kharge and TMC's Sudip Bandhopadhyay said the two issues--Adjournment Motion on demonetisation and the Income Tax Amendment Bill-- can be discussed together as the issues were similar. Saugata Roy (TMC) said since Jaitley yesterday introduced the Bill "surreptitiously" and "stealthily" amid din, the opposition did not get a chance to oppose its introduction as per rules.

B Mahtab said discussion on demonetisation was also necessary along with a debate on the bill as it had serious repercussions on the Income Tax laws. He said a way should be found. After the passage of the bill, the opposition termed as "black day" in Lok Sabha the passage of taxation bill amidst din without debate and accused the government of being "undemocratic and dictatorial.

The government, however, blamed the opposition for not participating in the debate and said it was "tragic" that the Bill had to be passed in the din. It asserted that the measure had to be passed for the "welfare of the poor and country" and cannot wait for those who are unable to "digest" the action against black money and corruption.

We want that Income Tax Amendment Act should come through the rules. The amendments proposed by the Opposition MPs and leaders should also be kept in mind before taking the assent from the President.

He said the bill was introduced yesterday and even the ruling party MPs had not studied it thoroughly. And today the bill has been passed in a tearing hurry which was not right. The Revolutionary Socialist Party said that it is contemplating to take up the issue with President Pranab Mukherjee.

The government has been totally undemocratic, dictatorial, authoritarian in passing such an important bill without discussion amidst din. It has taken advantage of the superior numbers to avoid discussion. It is unfortunate that we did not get any relief from the Chair. I had written to the Speaker (Lok Sabha) in the morning that this bill should not be allowed to be passed in the din. But what we apprehended happened. In spite of all of our protest, this bill was passed. The very purpose of the bill was sort of defeated, said Saugata Roy TMC MP.

Roy said that the government is "stubbornly" sticking to its stand that there will be no discussion but "we (opposition) are all together and we will continue to press for discussion" under a rule which entails voting. CPI(M) leader Mohammad Salim said that it is a "black day" in the history of Lok Sabha and an "undeclared emergency". It is not a fight against blackmoney but "rewarding" black money hoarders", he alleged.

The bill proposes to levy a total tax, penalty and surcharge of 50 per cent on the amount deposited post demonetisation while higher taxes and stiffer penalty of up to 85 per cent await those who don't disclose but are caught. The proposed law also provides for black money declarants to mandatorily deposit 25 per cent of the disclosed amount in anti-poverty scheme without interest and a four-year lock-in period. Those who choose to declare their ill-gotten wealth stashed till now in banned Rs 500 and Rs 1000 notes under the Pradhan Mantri Grabi Kalyan Yojana 2016, will have to pay a tax at the rate of 30 per cent of the undisclosed income, the new bill proposes.

Additionally, a 10 per cent penalty will be levied on the undisclosed income and surcharge called PMGK Cess at the rate of 33 per cent of tax (33 per cent of 30 per cent). Further, the declarants have to deposit 25 per cent of the undisclosed income in a scheme to be notified by the government in consultation with the Reserve Bank of India (RBI). The money from the scheme would be used for projects in irrigation, housing, toilets, infrastructure, primary education, primary health and livelihood so that there is justice and equality, said the Statement of Objects and Reasons of the Bill.

For those who continue to hold onto undisclosed cash and are caught, existing provisions of the Income Tax law will be amended to provide for a flat 60 per cent tax plus a surcharge of 25 per cent of tax (15 per cent), which will amount a levy of 75 per cent. Besides, if the assessing officer decides he can charge a 10 per cent penalty in addition to the 75 per cent tax.