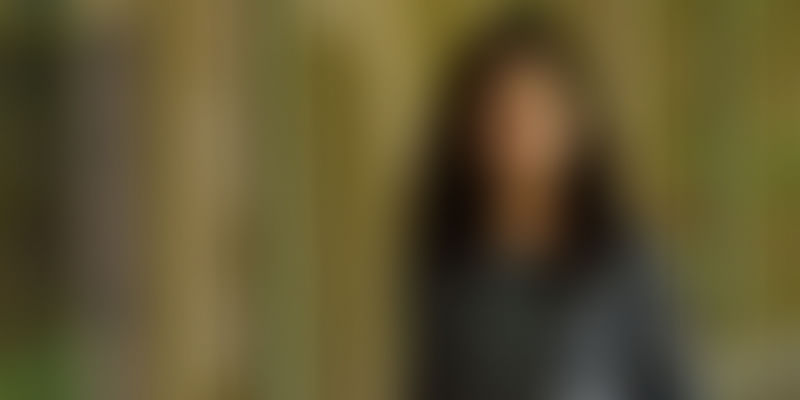 Forget headsets, you can now experience a virtual reality tour of a hotel suite through your hand gestures. Here’s a possibly one-of-a-kind integration of Gesture Recognition Technology and Virtual Reality, built to experience VR content without hardware.

This unique technology product has been developed by 20-year-old M.Tech student Rachana Bagde. G for Gestures, as she named it, was originally a college project idea attempting to achieve the concept of controlling a virtual environment through hand gestures. “After the successful implementation of the concept, I learnt about the huge potential of this technology,” shares Rachana. She recently launched her first full-fledged VR product for five star hotel suites called ‘The Hotel Suite Virtual Tour’.

“A body sensor is used, with a user standing in front of the sensor and moving his hands with some natural gestures, and being enabled to move in the virtual world. The user is able to take a virtual tour of all the available suites of the hotel. He or she may explore the interior, travel through different rooms, experience the outside view, and truly get the essence of the suite before arriving at a decision,” she says.

What’s the product all about?

The clients get software developed by G for Gestures that is installed in the system with the license. In addition, they get the Kinect Sensor and the 3-D virtual world content as per their requirements. “The sensor is usually placed in front of the display screen, so that the user can stand in the range of 0.8m to 5m in order to allow the sensor to properly track the body and gestures. The sensors are made available by Microsoft for commercial use.

Setting up the system and maintaining it over the long run is an add-on service from us,” says Rachana. Watch how it works.

This means that Rachana’s team creates the 3D virtual content and customises it based on the client’s need. The estimated price includes the cost of sensors and the software. “As of now, the starting price is Rs 60,000, and can go further depending on customisation,” adds Rachana. She is targeting the hotel industry, specifically five-star hotels. “With this, we’ll also be targeting the automotive sector, as similar products are already being used there,” she says.

Rachana originally hails from Nagpur, and is a fourth year student at the Indian Institute of Information Technology, Gwalior, pursuing a dual degree course in Information Technology. The 20-year-old is a Machine Learning and Artificial Intelligence enthusiast. During her winter internship at a Pune-based startup, she came across the use cases of hand gestures to control a robotic hand. “I worked with them for one month. In the meantime, I kept exploring gesture technology. And after few months, I came up with the idea of using it with the virtual world.”

Back home, Rachana pitched her project idea to some investors. “I got connected with the investors with the help of The Rodinhoods, where I had initially mentioned the concept in a post. An angel investor based out of Melbourne, Jatin Shah, decided to fund it on the condition that a company be launched after successful implementation of the concept. We are almost done with the process of launching a company,” she says.

“The only thing that is keeping a lot of users in India from VR experiences is the necessity of hardware. Here’s where I thought I could make a difference. Our solution includes a body sensor along with VR content. Unlike other gesture technology ventures, our product is flexible and easy to use. As the user stands in front of the sensor, he is able to easily calibrate the product with his natural hand movements,” adds Rachana.

Gesture recognition is the science of computers understanding human interpretation, thereby bridging the gap between intelligent machines and humans. It is used widely in the gaming, mobile and educational arenas. The market is expected to reach $22 billion in India by 2020.

According to a recently released TechSci Research report, the augmented reality (AR) and virtual reality (VR)market in India is projected to register a CAGR of 55.3 percent during the 2016 – 2021 period.

India has seen quite a few VR and AR ventures in the last few years. A YourStory report back in 2014 had listed some Indian startups in gesture technology as well. But G for Gestures is integrating both the technologies, using gestures with VR. The closest work of a similar nature is being done by TheFluidMotion, although they don’t allow the user to travel in the virtual world, but to just control the virtual world through hand gestures in a basic manner.

“We aim at offering the technology in various domains with a creative approach. We are also working on its applications in interactive product launches, automotive displays and advertising for now, along with the entertainment sector,” shares Rachana.

She aims for G for Gestures to become the best Virtual Reality service provider in India by extending product reach to as many domains as possible, allowing users to see the world through their hand gestures.