2 engineers are on a mission to save farming with drones 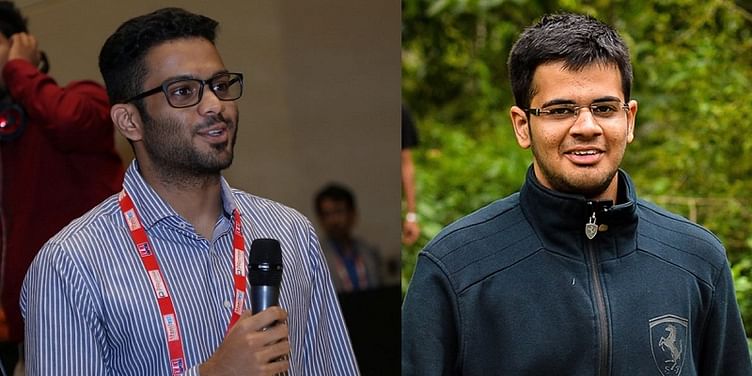 Two engineers, Pranav Manpuria and Kunal Sharma, slog it out at a farm in the town of Ramanagara, just outside Bengaluru. With the Kharif crop harvest just around the corner, these two engineers are now flying their drones across a five-acre field. Some might say what can a drone do on a farm other than take pictures of the field. But Pranav and Kunal have built a software into their drone cameras which read thermal images of the plant making food. Once the drone lands, they collect the images from its SD card and start mapping the farm on their laptops. Next, they analyse the images and are able to tell the farm owner which areas of farm are fertile and which are not.

"The idea was born while I was studying in the US and Kunal was in India. The farmer suicides over the last two years made us talk about how technology can play a role in saving farmers," says Pranav, the 22-year-old Co-founder of V Drone Agro.

Kunal and Pranav spent the last year working on at least 30 drone designs and began working with a couple of farmers this year. "Convincing the farmers was easy. But building the software has taken us more than a year," says Kunal.

Both boys have taken to building the company while at college. Pranav took a year off from studying at the Illinois Institute of Technology and Kunal studies in his final year of engineering in RNSIT Bangalore.

They have invested close to Rs 1 lakh in the business. Here is why they went after the business. A United Nations report titled Farmers Relief states that there were more than 100,000 farmer suicides over the last 15 years. The report says that Cotton farmers were the worst hit because of low yields.

High yield of each crop is dependent on the seeds, the soil, the cropping pattern, the weather, water, use of fertiliser and the lack of pests. Considering all these parameters, thermal imaging of the crop shows what is growing healthy and what is not.

"Most drones use only photography. But it's our software platform that makes these images intelligent," says Pranav.

The business and competition

Edall, Drona, and Idea Forge are some of the serious drone players in the country. Idea Forge has released drones in emergency situations like floods and riots. Idea Forge makes industrial size drones that are used for heavy duty applications with longer flight.

According to research firm MarketsandMarkets, the global small UAV (unmanned aerial vehicle) market will reach $10 billion by 2020. Such drones for civilian applications can be more than a $100 million in India by the same time.

VDrone Agro plans to go live with several farmers by next year by working with government and semi-government agencies. "We need the data to prove that our research model makes sense for stakeholders," says Kunal.

The civilian drone industry has not been able to raise any money because it has lacked the services to back it up. None of them own the hardware and the software is commoditised. It is in this regard that VDrone is ahead of several other companies that are focussed on landscape cinematography to photography.

The VDrone is built in Bengaluru and works on a pay load of less than 6kg. It is built on light materials and is a civilian drone. Hopefully, the farmers in Ramanagara will tell the two boys that their services have helped improve their cash crop. That is when VDrone would be sold to the government as a friend of thDronhee farmers.