'I have an opinion on everything from disease to divinity. But the world can do with one less opinion' -Alia Bhatt 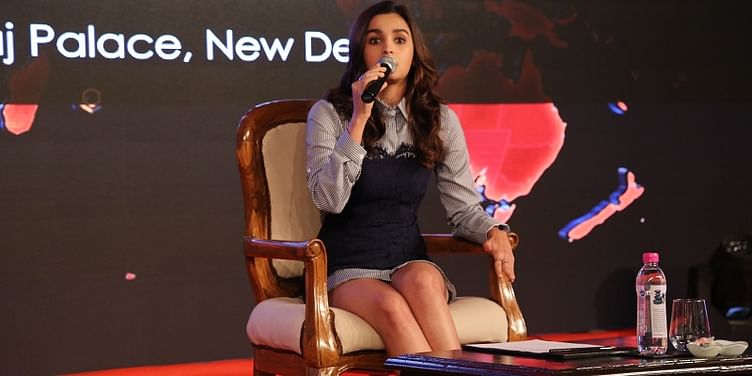 “I think this is a serious summit. If I sing, I am sure there will be several comments on how Alia Bhatt sang at a Global Entrepreneurship Summit,” joked Bollywood actor Alia Bhatt at the TiE Global Summit when she was asked to sing a song.

When asked if she would start her own company, Alia said that she is working with a few brands for a line of clothing and bags, but what she would really like to do is build an app. “Every time I see a new app in the market, I think, 'This is so cool, I really wish I had built it,'” she said. And when asked what app she uses the most, her response, apart from Uber, was Scootsy, the delivery app in Mumbai.

The brand ambassador for MakeMyTrip, Alia’s conversation with Anand Desai, Managing Partner, DSK Legal, flew over her interests in movies, brand endorsements and the startups she would possibly use.

Beginning with her acting career, Alia said that it is very rare that someone gets an opportunity to pursue their dreams when they are 18. She believes that she lucked out in that matter. If you know what you want to do, then there is no looking back.

And once you have that opportunity, you just need to take the plunge. Citing the examples of Sachin Tendulkar and Mark Zuckerberg, Alia said that they realised what they wanted, and started off while they were still studying.

“But having said that, I believe that education is very important. And in today’s online and digital world, with platforms like Khan Academy, learning and getting an education isn’t difficult. All you need to do is put your mind to it,” she said.

However, many would say that, hailing from the film background, it was easy for Alia to get an opportunity and opening in the field. Agreeing with this comment, Alia believes that while most people wouldn’t get the same opportunity she did, nor as easily, sticking around is possible only when you are good.

Also, like in any journey, Alia believes that even in her film journey, she has needed mentors and guides. While Karan Johar has famously been her mentor, her father, she believes, gives her the advice and guidance she needs. “Whenever I am travelling, I talk to my father, and he even tells me who the ministers are,” she joked.

Everyone, she believes, needs a mentor and guide, but you also need to go with your gut and insights. When you do anything, there needs to be complete belief in the action. This is the case with even the brand endorsements that she does. Alia added,

“I think I gain more from brands than they gain from my endorsements. By endorsing a brand, you become a part of their family. You need to believe in them and make them a part of your life.”

But life isn’t about brand endorsements and great films; there are ups and downs, successes and failures. While Alia has had a short career in the film industry, she believes that failure has taught her more than her successes. She said,

“Nobody can deal with failure. Especially someone who is always in the public eye. But it taught me to be calmer. If you don’t enjoy the process, it shows in your work. Everybody says you have to fail to succeed. But only when you experience it do you start believing the saying. Sometimes, to understand yourself better, you need to fall and get hurt.”

Taking an example from her school days, Alia said that in school, she would participate in all the races in the annual day. And she wanted to win them all. But in the fourth standard, they had a book balancing race.

“I was a very good runner, but was I good balancer? No. I didn’t win. I was depressed and I went to my father and told him, how could I have not won? When I think about it, and relate it to my career, I realise that you can only win and lose if you are trying to cross the finish line. But if you enjoy the walk and balance the book, you realise a different kind of win,” she said.

In a column in a leading newspaper, Alia had been quoted saying, "Sometimes, people forget that I am only 23 years old." Today at the Global Tech Summit, Alia answered a question on what opinion she had on Pakistani actors being asked to leave India; quoting her father, she said,

“I have an opinion on everything from disease to divinity. But the world can do with one less opinion.”