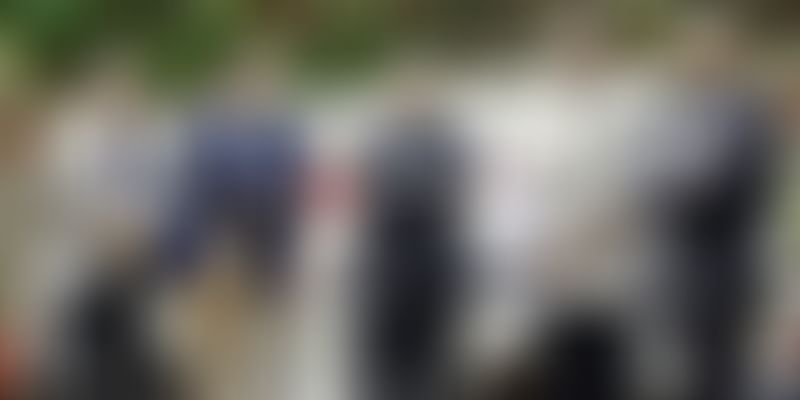 “There is a small poll and fight in the Mumbai office on who will go and deliver his order,” says Hari Menon, when YourStory asks him if Shah Rukh Khan really buys from BigBasket. This December, the online grocery startup completed five years, and it has been, in Hari’s own words, a great, roller coaster ride.

It’s not just their brand ambassador that adds glitter to the leader in the online grocery sector. BigBasket has broken the myth that e-commerce will not work for FMCG. They have grown slowly and steadily, with negligible discounts and a strong business model. BigBasket today boasts of over four million registered customers, 2.5 million transacting customers and sales of Rs 150 crore per month.

In the company’s headquarters in Bengaluru – a surprisingly small office in Domlur - CEO and co-founder Hari Menon, in conversation with YourStory, reminisces over BigBasket’s five-year-long ride to the top.

Earlier this year, the team also launched their B2B segment, Horeca, which is handled by a separate team.

With an average ticket size of Rs 1,500 for full stack and Rs 650 for Express delivery, BigBasket will be touching a revenue of Rs 1,800 crore by the end of this fiscal year. Though they are targeting close to $1 billion in revenue by 2020, grocery is an extremely difficult business. Hari says,

Five years into the business and we still start working at 7 am and finish at 12:30 am.

After acquiring Delyver last year, the team went on to build BigBasket’s Express business. They are looking at a cold chain investment and are setting up large facilities in Vijayawada and Ananthpura in Andhra Pradesh, which are slated to open in 2017.

BigBasket is today present in over 25 cities, and is shifting focus from further expansion to deeper penetration. Of the revenue, touching close to Rs 1,800 crore, fruits and vegetables contribute 18 percent, BigBasket staples contribute to 15 percent, branded staples 20 percent and FMCG 45 percent. The team, currently made up of 120 people, claims to have broken even in over eight cities and believes that they will reach operational breakeven in the next six months.

While the business is growing at breakneck speed, one of the biggest challenges the company faces is with blue collar workers, which make up 75 percent of their workforce. Even if 30 people don’t show up, the entire business goes down. Hari says,

“We haven’t been able to solve it fully. We have hired more people, we run a trust, contribute to education for their children, and give them health benefits. But we aren’t able to retain them. Catchment of hiring around our hubs has dried up. This year, we will be going deeper. People come from smaller towns, try it out, and if they aren’t able to adjust, they go back.”

In cases where the team doesn’t have the staff up to full capacity, they have to hold back, push orders and talk to customers. Festival times are the most difficult. During this time, the team reduces its capacity. So, when a customer places an order, he would get a time slot for two days later.

“Customers don’t wait for two days for groceries. It is certainly a big negative and we are grappling with it,” says Hari.

This was the exact problem that the team faced during the demonetisation. “As a culture, we have a deeply ingrained belief in not trying to do things that we can’t or shouldn’t be doing. Don’t take more orders when you can’t deliver them. We will shut capacity and say that we will deliver it later, not promise a delivery on a day it cannot happen,” says Hari.

Veterans in the on-demand grocery and e-commerce market, this is the second foray into entrepreneurship for the core team. Their FabMart business had pivoted from an online to a physical grocery business a decade ago.

Hari says that one of the key things that helps e-commerce is having an ecosystem that is ready and robust. When they started in 1999, the internet had just started making noise. “But there was more noise than actual transactions,” he adds.

With dial-up connections and poor online payment options, there was hardly anything that made e-commerce conducive. Suppliers didn’t trust and weren’t as open as they are now, and Cash on Delivery was the only mode that worked at the time.

“You can raise capital, which we did; but if you don’t have the ecosystem to support you, the business essentially doesn’t thrive,” says Hari.

But the team was keen on building an online grocery store. By 2011, the ecosystem had started showing significant improvement, and the deal sizes had grown. Online transactions had started taking place.

When BigBasket began operations in 2011, they were probably the startup that raised the highest first round of funding at $10 million. With a core team that had gone through the business in the past and understood its complexities, it was a no-brainer for investors.

However, when the team met their VCs, the only thing they were asked was to show a successful model globally. The single biggest dotcom failure was in the grocery segment. But the team used the example of UK’s Ocado, which had seen a fair bit of success. The team used these slides as the first for their pitch.

“We were particular that we would first raise capital and start. Because businesses need capital. For online grocery, there is nothing to bootstrap. Either you start scaling from day one, or you don’t at all. You cannot do the business in a small way. The whole business works only on scale, the unit economics don’t work otherwise.”

Taking the bull by the horns

The margin in fruits and vegetables for BigBasket is 35 percent. But starting small, one gets 10 to 12 percent. Without reaching a critical volume, it isn’t possible to even open a warehouse, and the model that needs to be followed is a just-in-time model.

Helion Ventures Co-founder Sanjeev Aggarwal, who is also board member at BigBasket, believes that there is a huge market opportunity for online grocery.

Out of the $2 trillion retail market in India, $300 billion is grocery. At present, online is only a small percentage of the overall pie. According to Sanjeev, due to urban density and parking issues, online grocery service stacks up in convenience. He says,

“BigBasket’s value proposition is convenience and selection. This is a very valuable business in the making. People will easily migrate to the online channel from the neighbourhood shops they patronise now. But penetration is still too low to call this a maturing phase. In the rest of the world, 10 to 15 percent retail is online. Grocery is one of the fastest growing categories for Alibaba in China as well.”

From day one, BigBasket has focused on fresh produce, one of the most difficult segments to crack. “The perception of quality comes from fruits and vegetables, not Surf Excel,” says Hari. The category of fresh produce, the team felt, would make the brand, as it is something people buy four times a month.

The model that works

There are advantages unique to BigBasket’s inventory model. Arvind Singhal, Chairman of Technopak Advisory Firm, says that the inventory model lets you work with producers and vendors on contracts. Besides quality control, this helps in saving costs. “You can deliver to the customer at a certain lower amount, which is a unique advantage with private labels,” says Arvind.

Sanjeev also says that as a brand, BigBasket is developing better leverage with suppliers due to healthy margins. Hari, however, believes it was a difficult call, saying,

“Initially, we couldn’t buy from farmers directly, as we didn’t have the volumes. We had to buy from mandis and survive at lower margins. In our business, word-of-mouth is huge, and it is, therefore, important to ensure quality.”

But customer retention is not too hard if your service is great. Soon, when the team introduced staples, they saw that people were able to shift and choose convenience.

Getting high on ‘Cocaine’

But online grocery players want to spread pan-India very quickly. A national supply chain will not work for the sourcing and distribution of groceries. “Building a localised supply chain is essential for a business like this. So, for launching in four cities, it is like building four businesses separately,” says Arvind of Technopak.

Arvind believes that launching simultaneously in multiple cities will cause the player to collapse before they can succeed. It is better to focus only on metros, not 25 different tier 1 and 2 cities, to be sustainable.

The BigBasket team was concerned that people weren’t buying from them every time, but only once or twice a month. Hari attributes this to high inertia, people being unwilling to shift from their normal buying patterns simply out of habit.

“There is a strong focus on convenience, but customers are also wary of missing or not getting deliveries on time,” adds Hari. It was, therefore, critical for BigBasket to build trust. If a customer buys twice from BigBasket in a period of three to six months, then he is your customer.

The team, to ensure stickiness, built a ‘Cocaine’ model. The customers are classified under trial one, two and three, and silver, gold and platinum. Trial one refers to the first order, the second order moves to trial two and trial three is the third order. On the fourth order, the customer moves to silver, and this is when the team knows they have got a customer.

The highest churn is from trials one, two and three, and the retention rate at platinum is at 95 percent. So the team focuses on getting the customer to move higher up the chain by incentivising them. Their overall customer retention rate is 35 percent.

The idea is to understand what the customer has purchased in the past, and retain him or her on the available data. “We use different offers for different people. What retains Mr X is different from what retains Mr Y,” says Hari.

The past year, Hari adds, was focused on growth and expansion. This coming year, the focus will be on deepening their presence in the cities they operate in.