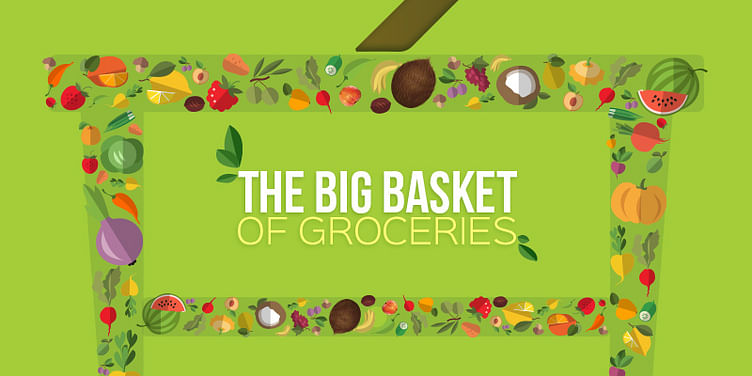 Online grocery platform, BigBasket has closed a $150 Million funding round led by The Abraaj Group. This round also saw the entry of new investors such as the International Finance Corporation, Sands Capital and participation from existing investors such as Bessemer Venture Partners, Helion Advisors, Zodius Capital and Ascent Capital, according to the Abraaj blog.

Founded in 2011 by a team of five experienced entrepreneurs - Hari Menon, VS Sudhakar, Vipul Parekh and Abhinay Choudhari, Bigbasket is headquartered in Bengaluru and serves customers across India. It is currently operating in eight metro cities and 10 Tier II cities. The company sells over 19,000 products across 1,000 brands, including fruits, vegetables, meat, beverages and personal care products and claims to be fulfilling over one million orders per month.

Bigbasket had earlier raised Rs 200 crores led by Helion Ventures and Zodius Capital in September 2014. Then in June 2015, it acquired Delyver, a Bengaluru-based hyperlocal delivery startup in a cash and stock deal. Then a few months later, it announced that it had raised $50 million from existing investors led by Bessemer Venture Partners.

Recomended read from September 2015: The Bigbasket of groceries is set to get bigger

Now in 2016, Bigbasket claims that it has been seeing a five-fold increase in monthly revenues over the last 18 months, supported by supply chain optimisation and an increased proportion of high margin private label products. Bigbasket's own brand products currently account for 33 per cent of revenue and are projected to reach 40 per cent by the end of this year.

According to a recent research report from Goldman Sachs, Indian consumption is moving online at a rapid pace. The country has the third largest internet user base in the world but an extremely low rate of internet penetration. However, by 2020, the number of people online is estimated to be over 670 million and this could hit one billion by 2030.

The e-commerce sector in India has grown rapidly in recent years and the report estimates that it will reach $300 billion by 2030. India’s current low smartphone penetration rate in the mobile phone market is also expected to change as smartphones become cheaper, rising from 16 per cent to 54 per cent by 2020.

Bigbasket claims to have over a million downloads for its app and currently competes with other funded players like Grofers, Peppertap and recently launched Amazon Now. Most recently Flipkart was running pilot operations for its 'Flipkart Nearby' service but then ceased operations. Reports also suggest that Ola will shut down its hyperlocal delivery service completely by the end of March.

Recommended read: Does Flipkart shutting down ‘Nearby’ spell trouble in the online grocery sector?

Bigbasket aims to use the proceeds of this round to finance its growth through further penetration into existing markets, expansion into Tier II cities across India, scaling-up of its recently launched express delivery and specialty store business that caters to top-up and emergency purchases, and increasing the product range offered to customers.

The Abraaj Group currently manages close to $ 9.5 billion across regional, sector and country-specific funds globally and has been present in India since 2006. The partnership with Bigbasket marks its third investment in India over the past five months, with previous transactions including Care Hospitals and the development of a gigawatt scale renewable energy platform in partnership with the Aditya Birla Group. Commenting on the investment, Omar Lodhi, Partner and Head of Asia for The Abraaj Group, said,

We are excited about the investment opportunities in India, a key geography for us, where we continue to identify and partner with market leading companies. Abraaj will leverage its experience in the consumer sector to enable Bigbasket to further enhance its strong domestic position.

VS Sudhakar, Co-founder of Bigbasket feels that the company has good opportunity to become a frontrunner in the grocery sector - both online and offline - in India. He said,

We intend to increase the reach of our just-launched one-hour express delivery service and also launch our marketplace for specialty stores in the coming months. This coupled with an expansion in our range of private label products will create a solid foundation for growth in both revenue and profitability.”

Several on-demand grocery startups raised funding last year, especially early-stage startups. However, a slew of them wound up their operations while some, like Bengaluru-based Jiffstore, got acquired. Unit economics is a challenge in delivering grocery and other daily essentials in the current on-demand model, considering the negligible margins and the low delivery fees that companies charge customers. Earlier this year Grofers and PepperTap rolled back their operations in nine and seven cities respectively.

The roll back by market leaders Grofers and Peppertap raised questions on whether this young industry can scale beyond major cities. However, Bigbasket has managed to raise funds at regular intervals. The company’s strategy to roll out its own labels (like rice and pulses) is helping it improve margins. The company is also ensuring it has other differentiating elements, like focusing on organic products. While Bigbasket has launched a marketplace business, especially to deliver bakery and meat products quickly, it is still relying on its inventory model. This focus on a relatively traditional model seems to have kept it ahead of its on-demand peers. Time will tell if that advantage will last.