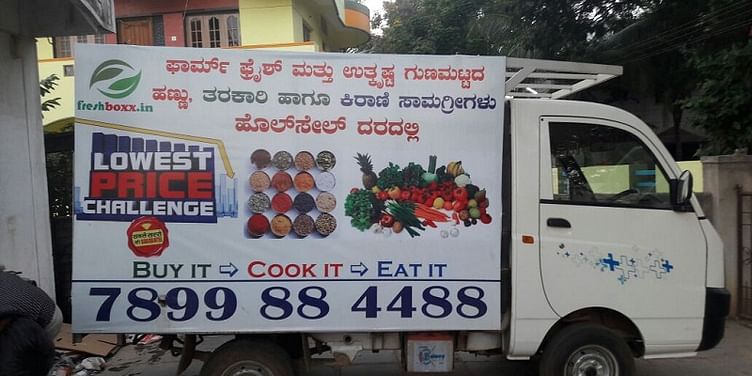 Online fruits and vegetables enterprise Freshboxx.in announced on Friday that it had acquired UrMajesty, a Hubli-based last-mile logistics startup, for an undisclosed sum. With this acquisition, along with the strengthening of its core team, Frexshboxx aims to multiply its revenue by starting business operations in South Karnataka while simultaneously launching in new cities of North Karnataka.

Rohan Kulkarni, an MBA from Chanakya Institute of Management, had worked across various insurance companies and the brokerage industry, his last stint being at MCX Stock Exchange Ltd. He realised that people in most Tier 1 and 2 cities generally have a tough time getting access to good quality fruits and vegetables that don't contain harmful chemicals. On the other hand, farmers are not able to get their produce into the hands of customers quickly enough, or, in some cases, at all.

While players like Bigbasket and Grofers are in the process of solving this pain point in most Tier 1 cities, Rohan decided to start up and tackle this problem in his hometown, Hubli. He noticed that with Infosys and other IT companies setting up their campuses in Hubli, it had the potential to be a big market soon.

Freshboxx receives orders from end-customers throughout the week till Friday, and then forwards them to farmers. After that, the startup's vehicles collect the fruits and vegetables from the farmers on Saturday morning. Once the produce reaches Freshboxx’s premises, its staff starts processing the vegetables and fruits by weighing, washing, sieving and cutting the produce. Freshboxx Ventures also uses Ozone technology to remove harmful chemicals and pesticides in the fruits and vegetables.

Freshboxx is also hiring from other players in the hyper-local industry, with Archana Pawar Saxena coming in as Co-founder and head of Freshboxx’s B2B Modern Retail segment. Archana was earlier part of the core team of Bucketkart, a Bengaluru-based hyper-local B2C grocery startup, which works on a similar business model. Avinash Shinde will also come onboard as a cofounder and head of B2B HoReCa, bringing with him experience from Ninjacart and Housejoy.

As of now, Freshboxx claims to have made good transactions while gaining revenue in the B2B, B2Horeca, and B2C segments as a fruits and veggies supplier. With a new team in place, it plans to expand its services in Bengaluru, Bagalkot, Gadag, Karwar and Belgaum, starting from the 3rd and 4th weeks of December.

Freshboxx is also working to establish a dedicated warehouse, cold storage and distribution centre that will help improve the procurement and delivery process with tracking solutions. The grading and packing process would also be done in-house via warehouses. The team believes that with the above processes in place, tenfold growth is achievable within the next six months.