Children of this MP village are fighting caste, religion, and illiteracy with schoolbags and skateboards 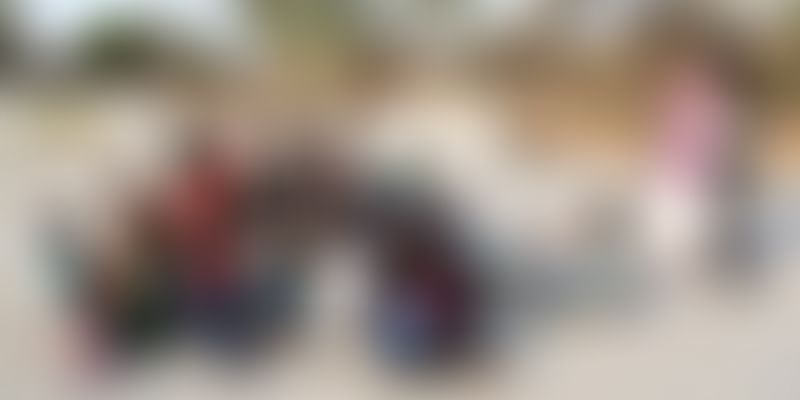 Defying the social stereotypes, which is generally associated with rural villages in India, children in Janwaar in Bundelkhand, Madhya Pradesh, are fighting caste, religion, and illiteracy with a schoolbag and skateboard in hand. Combining the mantra of sports and education for social upliftment, Ulrike Reinhard, a 55-year-old German author, futurist and community activist, built a Stakepark in April 2015 as a prime attraction for children.

Calling skateboarding a “disruptive movement” in this village, Ulrike says, “From the very beginning, we were clear that we won’t define any outcome and any specific kind of programme. We believe that you need the kids, the villagers themselves to drive to change. You cannot order change from top-down or however you want to do it. If the kids and the villagers don't want to walk, you can’t make them walk.”

The beginning of inclusion

With “co-creation” as their focal point, the Janwaar Castle Community Organisation believes in working with the people, and not for them. Since the construction phase itself, the skatepark managed to create a lot of action and interaction in the village. From becoming a source of income for the 1,200 odd people living in this hamlet to becoming a lifeline for compulsory education, the 4,320km wide skatepark served as a turning point for Janwaar. The castle has just two simple rules, ‘No government school, no skateboarding’ and ‘Girls first’, and is open to all kids without any barriers of caste, class, or gender.

The skatepark has no teacher. The children learn skateboarding with the help one another. Initially, it was only the Yadav caste boys and girls who would frequent the park. Slowly, even the Adivasi children started coming but, they were hesitant to ask for skateboards. Ulkire intervened and asked the Yadav children to share the skateboard with Adivasis.

“When the first one (Adivasi child) was in, it just happened that all the others came. And then at the skatepark, they eat, sit, and laugh together. It’s not the like the way it was before, when they were strictly separated. So, the caste difference was not tackled as an issue from our side. It just happened,” says Ulrike, who first visited India for a business conference in in 2012.

While visiting Khajuraho, her friends suggested she should set up schools in this region. Inspired by Skateistan project in Afghanistan, she decided to set up a similar skatepark in Janwaar.

Skateboarding towards social change and education

Today, the Janwaar Castle serves as a tipping point for social change witnessed all around this village.

One child took a stand against alcoholism and started to bring his father to the park almost every evening; because otherwise, he feared that, if the father stays at home, he would start drinking and fighting. A 16-year-old tribal girl, Asha, will be going to Oxford, UK to learn English; Karan, who is also a school dropout like Asha, visits an art school, Art Ichol, where he designs small little skateboards and tractors out of mud. “In fact, he even sold them at the Jaipur Literature Festival recently,” Ulkire says proudly.

Currently, the Janwaar castle community, through the medium of the Jaipur Literature festival, is getting ready to spread the message of women empowerment.

The team faced some problem with the teenage girls who simply did not have the time to come to the skatepark. Like many other girls, Shanti too expressed her wish to visit the skatepark daily with her younger brother, Arun. However, her parents favoured school education and chores over the skatepark, and hence, she was left out of this castle.

Upon requests, Ulkire spoke to Shanti’s parents and her school principal; she even invited Shanti to attend the Literature Festival. Since she was good in studies, her parents allowed her to travel to Jaipur. The children at the Literature Festival even prepared a theatre performance based on Shanti’s story. Further, Ulrike and Arun have now come up with a plan to include Shanti in the skatepark. Arun is planning to help Shanti with the water and chores around the house so that she has time to participate in sports and learn the art of skateboarding after school.

“The children have developed a lot of self-confidence. They have realised that things are different without specifically naming it. And because they are not biased, they are very innocent, the children are looking for a way to bridge this gap,” Ulrike says.

Update: Janwaar Castle is raising funds to gain access to the internet for the entire village. Internet will connect the Janwaar children with the rest of the world and improve their learning capabilities.