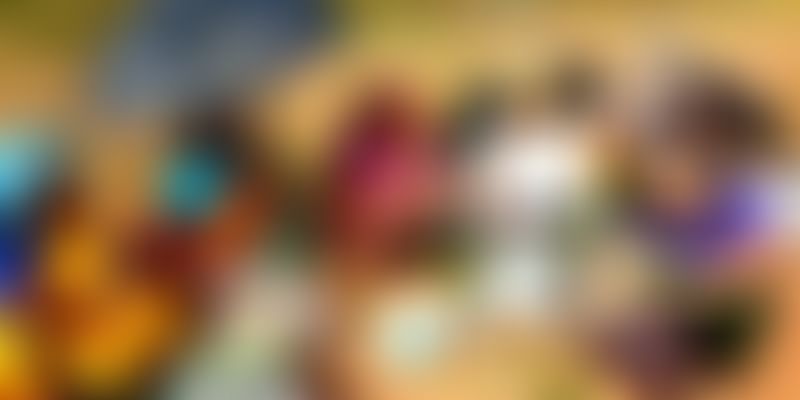 Modernism and globalisation have contributed towards this one phenomenon across the world. Be it Asia or Europe or any other part of the world, most cultures are disappearing and most traditions and identities are buried under a façade of a modernism. Despite such unenduring times, there still are people like Stephanie Langlet, who are looking to recognise, preserve, and promote local cultures and traditions.

From Europe to Asia

Stephanie, a 43-year-old travel blogger from Chauny, a little town 150 km from Paris, started travelling solo since 2004. Her fascination and admiration for Asia and its culture brought her east in 2007. After spending time in Vietnam, Cambodia, Thailand, and Indonesia, Stephanie first landed in India in 2010, when she visited parts of Tamil Nadu, Kerala, and Mumbai. Stephanie says,

“I have always been fascinated by Asia and its culture, even before visiting it. I've travelled to India four times. From my first trip, I especially remember of Nandi bathing in Tanjore, the impressive temples of Tamil Nadu, vibrant colours, Periyar reserve, and Shiva Trimurti of Elephanta Island.”

Stephanie arrived at Bastar on the first day of Dusshera, to witness the entire festival season, as she stayed there until the end of Dusshera. On her first evening, she visited the palace while the Maharaja was in procession with the tribal musicians and she later went onto to attend the Kaachan Gadi pooja, which is the opening of the 10 last days of Bastar Dussehra. Stephanie says,

“Traditional festivals are my favourite way to learn about a culture. I felt part of a community as everyone was welcoming me. They invited me everywhere, did everything to teach me about their culture. For the first trip of my life, I even felt as if I was receiving much more love than I deserved.”

Meeting the Adivasis from Bastar, seeing they have kept their traditions alive, discovering they have the world's longest festival, knowing how they respect nature, people, and traditions, made Stephanie realise the importance of traditions, culture and preserving them.

After her visit to Bastar, Stephanie knew that she wanted to give back the love that she received from the people of Bastar. Stephanie, who has been travel blogging for over 15 years now, began to write about her experience in Bastar, as a way to thank the local people for their warm welcome. She soon began to promote Bastar; its people, their arts, culture, and way of life.

Her work was noticed by the Chhattisgarh Tourism Board, travel bloggers, Indian reporters, travellers, and many Indians who were intrigued by her interest in the Bastar culture. Upon her second visit to Bastar in 2015, Stephanie discovered more about the Bastar culture and began on a mission to make India more conscious of the strong culture and identity that central India possesses. She soon left for Telangana, where she interacted with the Gonds from the Adilabad district and experienced the Dandari festival of the region.

With her growing popularity in Central India, upon her visit in 2015, and after having realised and noticed that most of her trips essentially focussed on the local people and traditions, she started a website, dedicated to the tribes and minorities of India. After having incredible experiences with the tribes of Chhattisgarh and Telangana, Stephanie decided to dedicate her time to the promotion of the tribal culture of India and France.

Stephanie, who was working for a railway company in France for almost 19 years, quit her job in January 2016. Stephanie says,

“Hospitality is a second nature for me and I've always considered our customers as travellers needing tips, reassurance, attention, and a local experience. As I'll be in India for a few months, I've also listened to the needs of some of my readers. They were asking how they can also help people. So I'll propose a free mentoring programme, where people will learn about social work, hospitality, management, travel blogging, according to their needs.”

Stephanie is also planning to showcase her work on the blog, as she believes it will inspire and help people on a similar path. She has started a new category on the blog, where she shows people how to help others through their trips or business.

Stephanie now lives in the French Basque country. Although she wasn’t born here, her fascination and respect for the Basques who preserved their identity and culture brought her here.

Stephanie plans to launch her guesthouse and guiding services in the French Basque country. She wants to use her new place in Basque to help foreigners speaking English discover the region. She hopes to contribute to the longevity of the tribal and traditional cultures of the region and keep alive the festivals and customs that exist only there.