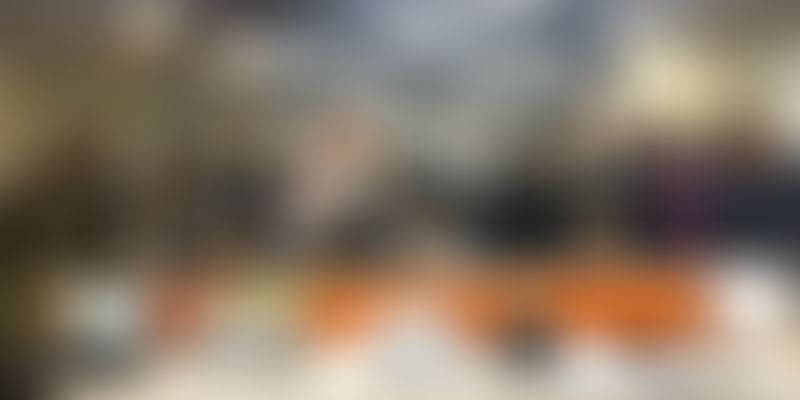 CRON Systems is an IoT startup in the defence space. Started in October 2015, this Gurgaon-based startup builds solutions for the Indian armed forces.

One morning while reading the newspaper, 25-year-old Tushar Chhabar chanced upon a clipping that said India had imported crores of metal fencing from Russia. Tushar wondered why India would have to always import products, considering the fact that the country produces the largest number of engineers. He found that most products were ineffective, too expensive, and complicated.

It was then he toyed with the idea a building a company in the IoT and defence space. Thus, in October 2015, Tushar setup CRON Systems, a defence IoT startup that deploys border security solutions.

In the perimeter intrusion detection and prevention space, CRON initially focussed on creating laser walls for the Border Security Force (BSF) but soon expanded their product line with automation for drones, rovers, and central dashboard to control all of it over their encrypted communication system miCRON.

An engineer from Vellore Institute of Technology, Tushar had begun his career by designing and manufacturing cost-effective long-range drones. He also worked with Google as a strategy consultant to the Billion user project and as a field manager at FourthLion for the Nandan Nilekani campaign.

Starting with the BSF

The lack of effective products in the defence caught Tushar's attention and he started spending months together at the border. Post this, he started product development around the Indo-Pak fence and put together an alpha team to take the idea forward.

The team has also conceptualised Skywatch, which they claim to be a drone denial system, which is slated to launch in September 2017. “This system allows you to get protection from small to medium scale surveillance and potential threats from drones,” says Tushar.

They are also working on creating advanced technology using data encryption and communication.

Working in a highly regulated market

According to Tushar, the core challenge was that most people were not willing to venture into this industry. Defence industry was initially run by a monopoly and it was difficult to take a product to people who were not willing to give something new a try.

Currently, Bharat Electronics Ltd’sRolta and Tata are the major suppliers of defence products. In 2015, the BEL-Rolta India consortium bagged the Ministry of Defence’s (MoD) development agency order for the Battlefield Management System (BMS) project, worth over Rs 50,000 crore. BMS is an awareness and visualisation system that aims to optimise the effectiveness of tactical units.

Despite these challenges, the Defence and Internal Security sector is a gold mine of opportunities for startups. Consider this market size. The total Defence budget is Rs 2.64 lakh crore, and the total input bill out of this is Rs 90,000 crore. And of this, Rs 45,000 crore is the electronics component.

However, since it is defence sector, there are numerous hurdles in the form of positioning and permits and also ensure topnotch product quality.

Tushar approached Tommy Katzenellenbogen with an intention to raise funds but ended up roping in him as a co-founder and chief strategy officer. Tommy has been an Isareli Airforce Pilot for over 15 years and had turned into a VC after his MBA from Cambridge.

During his military career, among other positions, Tommy served as a lead product manager responsible for developing the next generation of the F-15 avionic systems and as a deputy squadron commander in an F-15 squadron.

Tushar was also joined in with his childhood friend Saurav Agarwal, who was working with Qualcomm and had worked at Grey Orange earlier. It was the earlier team that helped bind CRON. Citing an example Tushar says,

“One of our first employees was Rahul Grover who has practically done work in every domain possible at CRON. During our initial days, Rahul and I used to weld, paint, and solder units together. In fact, when he joined CRON, we paid him a salary of Rs 5,000 and on average he spent over Rs 20,000 every month to keep the company afloat.”

Currently, the CRON KV series works on encrypted data transmission that detects an intrusion. The system also has the capacity to distinguish and report both human and beast intrusions.

After detecting the intrusion, it transmits data over an encrypted communication network, which sends automated rovers or drones for verification.

“The entire mapping and control of the concerned perimeter are done on our C&C platform miCRON. Our drone denial system Skywatch blocks any drone 700m away from the jurisdiction by killing its pulse and communication capabilities,” adds Tushar.

Currently, the other startups working in the defence sector include Vizexperts, a company that builds digital sand model technology that was inducted by the Army for real-time operation planning, enabling faster and critical decision making.

In the defence equipment space, there is Tonbo. The startup makes night vision systems for Indian and international customers including DARPA, an advanced-technology branch of the US Department of Defense. There also is the Bengaluru-based Saankhya Labs, a hi-tech startup which offers its solutions to Indian Space Research Organization (ISRO).

Tushar claims that they are the first of its kind product company in India, which focuses on smart solutions integrations for the defence. He adds that they have created modular product lines, which provide solutions to complex perimeter protection requirements and not just technology ad on.

While the team refused to share any revenue details, they claim that their CRON KV series cover numerous hostile stretches along the Indo-Pak border. “We have massive traction and are doing a couple of large pilots over the next couple of months.”

CRON had initially raised an angel round of funding from the co-founder of Yebhi Rajul Garg and angel investor Sunder Hemrajani. The team closed their pre-series A funding from YourNest Angel Fund II. Speaking of their future plans, Tushar says,

“We are currently working on synergies for our verification and action rovers. Also, CRON is now targeting the international market (Middle East, Africa, and Europe). We intend to create end-to-end perimeter protection systems with our goal to make people feel safer. We are also venturing into warehouse, sensitive installation protection in the next couple of quarters post completion of our BSF deliveries.”