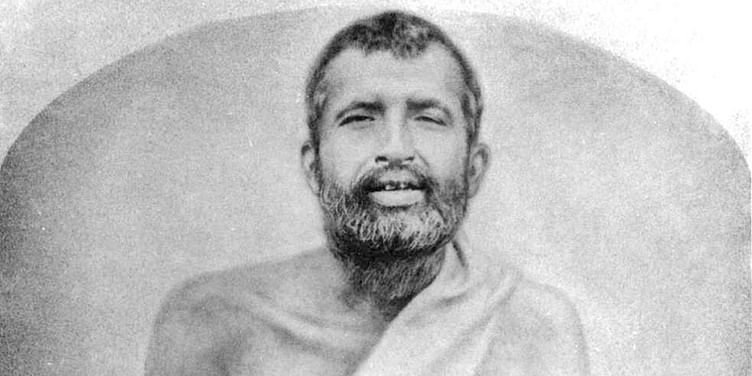 What is it about the divine that awes us so? How is it the one untouched space of a higher consciousness that no amount of scientific data can even try to penetrate? Is it simply a religious superstition cascaded down the ages or the fear to divulge into the unknown?

However, every once in several decades, a man or woman is born in this state of higher consciousness and with age, they have the option to either harbour and nurture it deeply or dismiss it for the flashy decadence of the world. But these yogis or mystics have often been thought of as middle-men, chains between the mortal and the divine, with one foot in each world.

Ramakrishna Paramahamsa was one such yogi who, from an extremely early age, responded to a greater calling. Born into a family of Brahmins in 19th century Bengal, as Gadadhar Chatterjee, Ramakrishna’s disciples included influential names like Swami Vivekananda, Kaliprasad Chandra, and Sri Keshab Chandra Sen, who took his teachings to the world-stage.

Vivekananda, one of history’s greatest leaders and social activists, built a series of homes across the country as a tribute to his mentor, known as The Ramakrishna Mission. In a letter he wrote to Alasinga Perumal, he stated his absolute awe and intimate respect for his guru, saying, “This man had in fifty-one years lived the five thousand years of national spiritual life and so raised himself to be an object-lesson for future generations.”

Ramakrishna’s official patronage of the divine and his claim to have been visited by the Goddess Kali herself were recorded back when he presided as priest at the famous Dakhineshwar Temple, created by Rani Rashmoni back in 1855. Soon after this, his powerful persona and call for a simplistic religion – a complete contrast to the variegated and complex practices of other Brahmins in those times – attracted dozens of disciples from all kinds of social backgrounds in colonial India.

Later, Ramakrishna and his wife, Saradamoni Mukhopadhyay, endorsed the idea of a single unified religion for the world – that of God without the confinements of labels like ‘Hindu’, ‘Muslim’, or ‘Christian’. To understand this almost monotheistic religion, he took to practising both Islam, where he claimed to have experienced a vision of a radiant white bearded man, as well as Christianity, where he had a vision of Madonna and Child and of Jesus himself.

Having completed all 64 sadhanas of tantras under the guidance of a female sage, Bhairavi Brahmani, learning the inner mechanics of the Vaishnav faith from Guru Jatadhari during 1864, and being initiated into Sanyaas (the formal life of an ascetic) during 1865 from Monk Totapuri, Ramakrishna used his own experience and enlightenment of the world as a lesson to his disciples across the world.

Celebrating his religiously liberal legacy 181 years after his birth, here is a list of some of his most soul-stirring and introspective quotes that capture the beauty of life and spirituality: