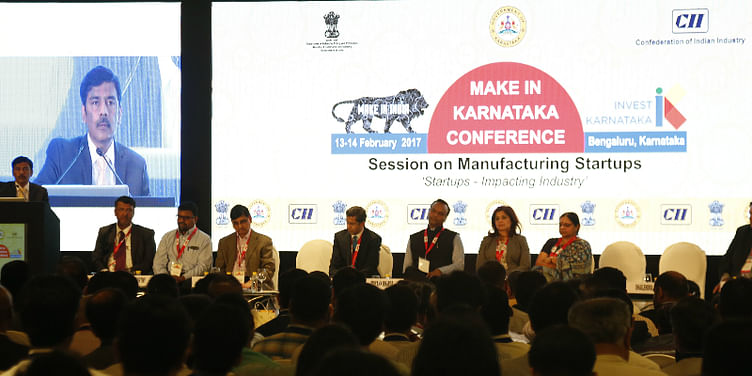 The ‘Startup India’ initiative, launched in January 2016 by Prime Minister Narendra Modi, recently completed one year of existence. Shailendra Singh, Joint Secretary and CVO (Chief Vigilance Officer) at Department of Industrial Policy and Promotion (DIPP), took the stage at the Make in India – Karnataka conference to talk about the journey so far, learnings, and the future of the Startup India initiative.

“Startup India is a startup too”

Shailendra Singh noted that the past year, the Startup India initiative has been an incredible journey of learning and the team never thought it would progress like it did. In the initial stage, the Startup India team had to decide which department would handle different roles and then start building on it from the ground-up. He said,

At Startup India, we are trying to build an ecosystem at the national and state level. We want to take care of startups at every stage – starting from registration of a startup as a company to necessary compliances, mentoring, incubation, funding, and exit.

Singh also mentioned that all updates, be it progress so far, plans in action, and also future plans are updated on the Startup India website. He encouraged the audience to regularly visit the platform and share feedback with the government.

As Startup India is just a year old now, Singh joked that the initiative qualifies as a startup itself as it is undergoing a lot of learnings and taking inputs from the Indian population. Talking about some of the initiatives, he shared the following:

Startup India had made company registration easier and now a new company can be incorporated within two days. DIPP has also written to different states to make their norms easier and assist startups in focussing on the job and at hand instead of tip-toeing around compliances.

While the government had passed the 10,000 crore ‘Fund of Funds’ and is the process of deploying it, Singh noted that even though the startup funding environment has not been ideal in India, the Fund of Funds is not aimed at disrupting or replacing existing models. He said,“We are of course not disturbing the channel through which startups approach an angel fund or VCs.”

Singh also noted that they got feedback that banks don't provide loans to startups because innovative startups are considered to be high-risk ventures. To counteract this Singh noted,

We are formulating a credit guarantee scheme of Rs 2,000 crore and hope to launch it within a month. This should take care of funding issues.

Singh noted that the government and its many bodies are helping startups validate their startup ideas through its network of mentors, incubators, and also with the government acting as a customer to many upcoming startups. Singh said,

Earlier startups were looking at only 25–30 percent procurement which was done by the government. Now startups can compete with major players.

To further level the playing field, the government has also removed turnover and experience criterion for micro, small, and medium enterprises. All these measures were put into practice by interacting with the general public and understanding their pain points.

DIPP has also made the process of filing patents easier by reducing the filing charges by 80 percent and also providing a panel of 1,000 facilitators to help with the different nuances involved ranging from filing patents to intellectual property rights (IPR) issues.

The most important piece of the puzzle – Incubators

While patent filing and raising funds are critical to a startup’s success, Singh noted that startup incubators have historically been shown to be the most important stakeholder for the startup ecosystem. Singh said,

All developed countries where startups are flourishing because they have really worked on incubators and they are doing well. That is one place we are lagging behind in. Anyone with a good idea should enter an incubator and come out with a ready product.

Many ministries, National Institute for Transforming India (NITI) Aayog, DST, and MSME are working on developing world-class incubators. The government is also inviting corporates and academic institutes to work together to build incubators. Singh said,

We should have 1,000 world-class incubators in the country to take the startup ecosystem forward.