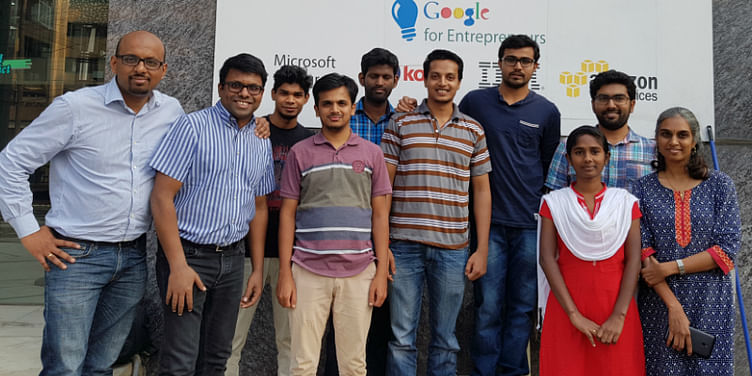 Is Artificial Intelligence-powered computer vision the next frontier for better security?

CCTV cameras placed at strategic points all over the country gather important data points and notice patterns. But so far these cameras have been playing a passive role and have been leveraged only after an event or mishap has taken place. It is almost impossible for humans to monitor thousands of these live feeds and take pro-active action. This is where Artificial Intelligence (AI)-powered computer vision comes in.

Bengaluru-based startup Uncanny Vision has made a lot of strides in this space and has developed an optimised AI-based computer vision solution for smart surveillance cameras to provide real-time alerts. Here is their story.

Uncanny Vision was founded in 2013 by Ranjith Parakkal, 37, who had earlier spent 11 years at Texas Instruments as global technical architect for vision and image processing. He also went on to file a patent in image processing.

Ranjith realised that developing and deploying computer vision technology is computationally intensive and required high-end PCs and servers, and chips were advancing at a rapid pace. Hence, there was an opportunity to leverage new-age hardware and AI to bring real-time ‘vision’ to IoT devices.

Ranjith, CEO of Uncanny Vision, found Navaneethan Sundaramoorthy (38) to be a great fit as his co-founder and CMO. Navaneethan had spent 11 years at Xilinx Inc., USA, in both engineering and marketing roles for five and six years, respectively. He has three patents in design of embedded systems and IoT devices and was also a member of the team that developed Zynq SoC at Xilinx. So, they joined forces.

Since inception, Uncanny Vision has released two products in the market:

Talking to YourStory, Navaneethan noted that these two products are already being used by multiple Fortune 500 companies in Japan, USA, and India. Because of NDAs, Uncanny Vision declined to name any of their clients but noted that they operate in sectors like surveillance (US and Japan), retail (US), banking (India), and semiconductor (US and Japan).

With a 15-member team that has a strong understanding of embedded design, computer vision, and machine learning, Uncanny Vision is now in the process of developing a next-generation intelligent surveillance camera. Talking about their new product and the pain point they are solving, Navaneethan explained,

How the Uncanny Surveillance system works

The product provides real-time alerts to human operators, enabling quick action in times of crisis, and also potentially reducing the intensity of the consequence. Navaneethan noted that the first target application for Uncanny Surveillance is ATM monitoring and is currently being evaluated by leading companies that work in the banking sector in India and North America. He also noted that their goal is to provide assistance to humans to make better decisions and not replace them.

For ATMs in India, Uncanny Surveillance will be able to automatically recognise and generate alerts for the following types of potential threat scenarios:

The AI-powered surveillance sector has seen a lot of interest globally. Google’s Nest has outdoor and indoor cameras that leverage AI to detect people and security threats. San Francisco-based Umbo CV, which announced a $2.8 million seed round in March 2016, is developing a cloud-first AI-powered self-learning camera. Uncanny Vision, on the other hand, is focussing on a niche sector and detecting anomalies in the banking process (as discussed above).

Navaneethan noted that like other AI-based systems, their Uncanny Vision systems will constantly improve and become more accurate as they are fed with more real world data. The short-term goal with their surveillance system is to provide real-time alerts and let humans take action as needed. But he noted that for some specific actions they could automate the response to save time.

Uncanny Vision is currently running pilots with banks and customer and aims to officially deploy them soon. Talking about their progress, Navaneethan noted that they have seen good progress so far and the goal is to further improve accuracy. He added, “Some parts of algorithms are already 90 percent accurate, while some are less accurate. Every scenario is different. So we are working along with banks to train our software for different use cases.”

Uncanny Vision has been working closely with Qualcomm and was also a winner of Qualcomm’s Design in India Challenge. Qualcomm has supported the venture by providing access to both hardware and software resources for Uncanny Vision to leverage. In an earlier video with YourStory, Navaneethan had noted,

Qualcomm has supported us a lot, especially by providing IP connected camera that is the most advanced surveillance camera we have...

After going into deployment, Uncanny Vision’s long-term goal is to connect with high volume manufacturers and tap into the nascent market. While the current focus is on the banking sector, Navaneethan noted that their core technology can also be used to detect anomalies and provide real-time alerts for other sectors.

Disclaimer- Qualcomm Ventures is one of the investors in YourStory