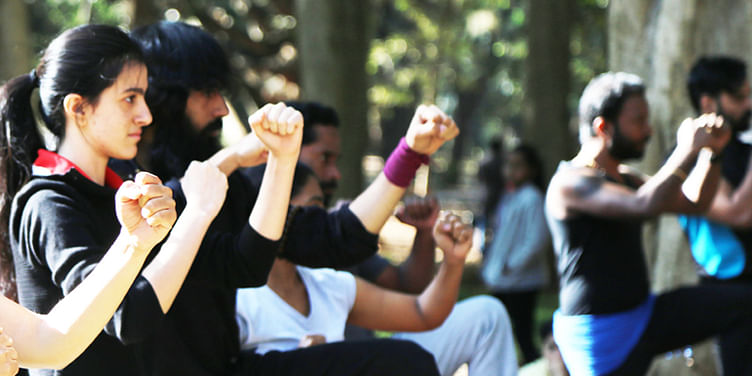 This article is sponsored by Akshar Yoga.

For centuries, violence has been a reality for women in India. Even today, where women are leading multi-billion dollar companies, shouldering responsibilities in key government positions, earning for the family and becoming agents of change, women continue to be subjected to mental and physical violence.

While the degree of violence varies – from wolf whistles, lewd stares, being touched inappropriately, to gruesome rape, its impact doesn’t. Every single time, it is a violation of dignity and basic human right. This has led to numerous conversations of how we can bring a change and make workplaces, homes, cities and streets safer for women.

One among these is the need for women to learn self-defence. While most acknowledge that it is important, many doubt if such training would help when faced with an actual crisis, and the body and mind freeze.

This is where yoga and self-defence comes together.

Grand Master Akshar, Founder of Akshar Yoga, a popular yoga academy chain in Bengaluru, says, “Yoga, as an art helps train people in ‘will- power’. One of the consequences of practising asanas is that we learn to hold inspirational poses and overcome the wave of emotions that arise from them. Self-discipline and mental strength stem from such practices. And these qualities are the basis for self-defence.” He adds, “A true yogi or yogini does not understand the concept of ‘giving up’.”

Register for the self-defence training on 25 and 16 February in Bengaluru by Grand Master Akshar and learn how yoga can help you master this vital skill.

Why Yoga is at the core of self-defence techniques

People often associate self-defence with martial arts such as karate, kick-boxing and not yoga. Commenting on this, the yoga guru reasons, “To be conscious, ready for potential threats, to ensure that you are proactive and not reactive, to be empowered, confident and strong: this is what yoga teaches us. This is also the borrowed principal for all your other self-defence techniques. Yoga itself is the basis for all ‘modern’ self-defence methodologies.”

Talking about how there has been a slow but apparent evolution of why people practised this ancient spiritual art, he says, “Yoga is all that was, all that is and all that will be.”

A brief pause later, he says, “However, the motivation to practise this divine art may have changed from one era to another. Formerly, yoga was practised in secrecy and in private spaces; compare that with today, you will see the scenario isn’t the same. Now, the rationale of learning the art of yoga leans more toward developing vigour, attaining health, and happiness.”

He explains further, “The ultimate goal of yoga is peace. However, in the current time and space, it is challenging to achieve peace without having accomplished strength. To that end, yoga and self-defence are mutually-inclusive and connected.”

Women, yoga, and self-defence: How the dots connect

“Yoga helps awaken, what we call, Shakti energy. Additionally, through yoga and meditation, women are able to reach out to themselves and realise their true value and potential. The whole concept of ‘men are stronger’ is put to rest. Through yoga, women develop the existing confidence to match up to their counterparts as equals,” says Akshar.

A reason why yoga in self-defence differs from other techniques, is because “the principle of yogic self-defence is self-realisation and protecting this self”.

While it sounds empowering, the question posed by many who correlate women’s capabilities and strengths with their age – can women of all ages learn yoga in self-defence? Akshar says, “Women from all walks of life can acquire and even master this skill. The adage ‘age is just a number’ is true here.”

A new movement in self-defence

Akshar believes that the three most important factors when it comes to self-defence for women are: competence, confidence and consciousness. These also coincide with the pursuits of a yogi.

On February 25 and 26, Akshar will be leading a demonstration of how yoga can help in self-defence. He will be joined by Commonwealth Games gold medal-winning wrestlers Geeta and Babita Phogat, and thousands of enthusiastic women and men.

The Chief Minister of Karnataka, Siddaramaiah, will be inaugurating the two-day mega yoga camp.

Take part in this mega event in Bangalore, and be instrumental in spreading an important social message. Register now.

Timings on both days: 6:00 AM onwards

*Entry to the event is FREE