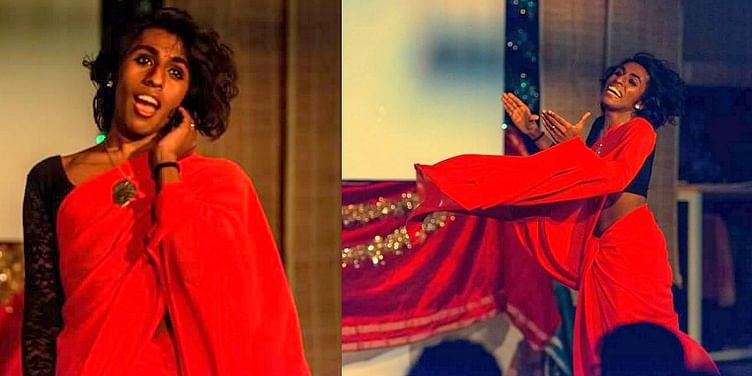 Twenty-two-year-old Shilok Mukatti has come a long way in the two years since she shifted to Bengaluru — from fighting her personal battles with society's rigid notions of gender to winning a national award for her radio show, she is teaching all of us a lesson on inclusivity.

Shilok's journey shows us how persistence and a strong spirit can turn a battlefield into a playground for success. This is her story:

Shilok was raised in a middle-class family in Karnataka's Coorg. Her mother was a nurse at a local hospital and her father was a govt official. While her younger brother's suicide left a deep impact on all of them, it was that much harder for Shilok because, as she recalls,

With my brother’s death, all our lives came to a halt. On the one hand, I had my parents who were grieving and on the other, I was internally fighting my own gender crisis. My parents always let our upbringing be conversational, casual, and positive. We were friends more than anything else.

The onset of puberty was when Shilok came to terms with her reality. In all her naivete, she thought her feelings of femininity were normal, but society's perception was quite different. Shilok shares one painful experience,

When I was in class 10, one day my Kannada teacher asked me to recite a poem in front of a class of 80 students. He mocked me midway and said, ‘Shilok talks like a maama (eunuch) who begs at traffic signals’. The whole class burst into laughter. I was extremely offended, so much so that I wrote a suicide letter while in the class and wanted to end my life that day,

As she faced many challenges with regard to gender identity in her native place, she decided to pursue her education in a different city, and that was when she was introduced to psychology and learnt more about the transgender community.

Although I always felt that the change in me was absolutely normal, it took a lot of resilience and courage to explain my new gender to my parents, says Shilok.

She recalls the day she verbalised her feelings to her parents:

I was reading an autobiography called Truth About Me: A Hijra Life Story by an author called Revathi. In the book, the protagonist talks about how she got bullied and instances where her gender was mocked. While I was briefing my mother about the book, I accidentally mentioned that I have been through the same phase too. My mother was taken aback when she heard this and she started justifying how reading such books gives you wrong ideas. She convinced me that the fault was in the book and not me.

Her parents immediately consulted a sexologist. The meeting with the doctor did not go the way Shilok had imagined. "The doctor told my parents that there was nothing one could do and they just had to accept the reality. The doctor further said that I knew more about my gender than he could ever advise me about. This was one of the most cherished moments in my life," smiles Shilok. Although her parents took a while, they eventually came around.

Finding a purpose in Bengaluru

Shilok always had a liking for psychology, and her gender issues brought her closer to the subject, which was why, after moving to Bengaluru in 2015, she chose to pursue her B.A. from Jain University. Considering her childhood experiences, Shilok was wary about what this new phase of life would bring.

To her surprise, students and teachers alike were welcoming. With a newfound confidence, Shilok was slowly growing into a different person. This was when she was introduced to poetry. Initially interested in Kannada poetry, she slowly started venturing into English poetry and today has several awards to her name.

With this confidence, Shilok walked into community radio station 90.4 for a summer internship, only to have her life transform.

Bangalore's first and only community radio station, 90.4 was founded by Pinky Chandran to bring to the limelight the struggles of the common man. With specially curated shows on topics like the queer community, farmers' lives, forestry, ragpickers, and women, the radio station takes a special interest in talking about real-life struggles.

Her first real steps in the world of radio were as an RJ for a limited edition show called 'Yaarivaru', after which she went on to curate 'Colourful Kamanabillu', which aired every Wednesday from 1:30–2 p.m. The fan base for this show was so huge that it was felicitated with a national award by the Ministry of Information and Broadcasting. Today she works with the station as a full-time RJ.

Of the 180 shows that had sent their submissions, I was quite sure that we had no chance. But Pinky was very confident that we would make it to the top. Spearheaded by the Government of India, this award show was for radio stations nationwide and we won it, Shilok shares.

An embodiment of the saying that “When life gives you lemons, make lemonade,” Shilok exudes an energy women everywhere would do well to feed off. As International Women’s Day approaches on March 8, let’s all hope that somewhere, in some corner of the country, there is another such gem rising from the ashes.