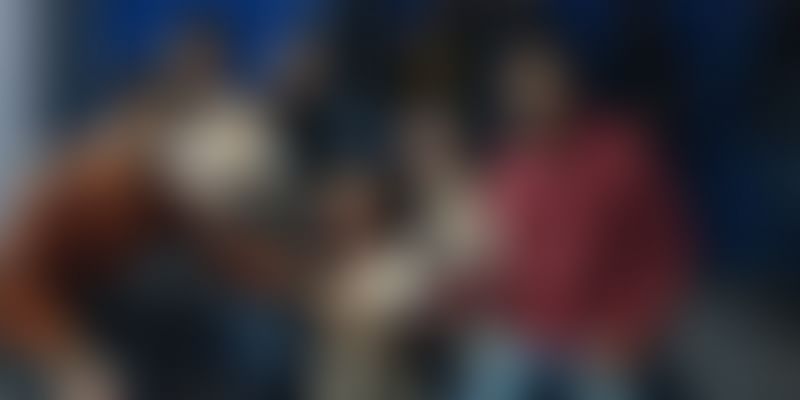 Most people would vouch for the fact that just having a dog around can bring a huge smile to their face. And not only that; their presence also helps in reducing stress and anxiety. Realising this was what led to the beginning of the Gurugram-based startup called Fur Ball Story. This startup was set up in 2016 with the idea of providing "pet therapy" sessions at educational institutes, corporate offices, hospitals, and even homes.

The idea for Fur Ball Story came up when two dogs were brought onto the college campus of Srishti Sharma and Animesh Katiar, who are both law students. They were brought in for recreation, but they also ended up solving other problems too. Animesh told Office Chai,

They went on to discuss this idea with two of their friends, Arushi Dixit, who is a designer, and Kunal Daral, who is an IT professional. Upon further research, they realised that the "pet therapy" concept was already widely popular in the West. With an idea that is relatively new to our country, the startup came into being in December last year.

They have adopted three dogs so far - a Labrador called Muffin, a Shih-Tzu named Cocoa, and a Golden Retriever called Angel. These dogs are being trained to meet over forty to fifty people without snapping or barking at them. The adorable canines are presently undergoing an internationally certified training. Several sessions have already been conducted in companies like Nagarro and MakeMyTrip, a few educational institutes, and also at several homes. Srishti told Office Chai,

Our pooches very successfully created a stress-free and vibrant environment, helping the people in wiping their blues away. The surprising bit is that even those who are afraid of dogs are not able to stop themselves from being a part of this activity. They start with Cocoa (since he is the smallest breed) and end up spending hours with Angel and Muffin as well.

So far, it (the sessions that they have held) has been word of mouth. We held a session for over 200 employees of a company where one of our friends works. In these sessions, we aimed to de-stress the employees. The feedback was tremendous. In this process, we tried to beat down the fear of dogs in a lot of people by introducing them to Cocoa, who is generally not utilised for de-stressing people, but it worked just fine for us.

Animesh further elaborated on his future plans and told ScoopWhoop,

We are planning to start a bigger centre in Gurugram, where people can just come and unwind in the company of lots of dogs. We will also be getting a psychologist to be a part of this centre so that people can evaluate their progress. This should tentatively start by the month of May, this year.