How this duo is solving the warehousing problem of Bihar farmers 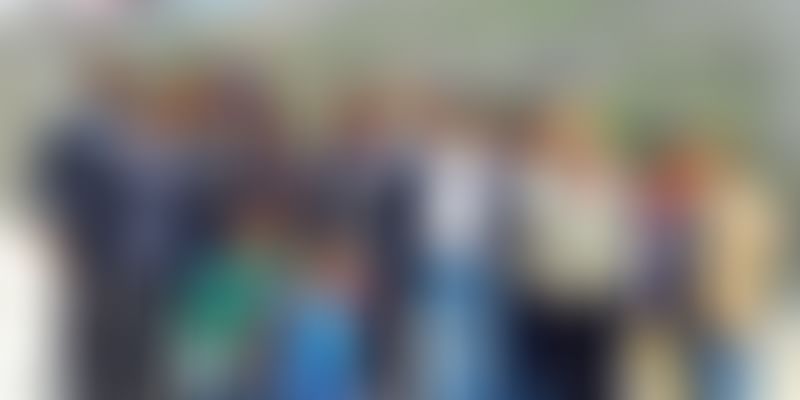 Ergos is a Bengaluru-based agri-supply chain firm that is solving the warehousing problem of farmers in Bihar.

However, small and marginal farmers rarely use any of these modern warehousing facilities. They either sell marketable surplus immediately after harvest or use more traditional storage facilities by covering heaps of grain with husks, clay, or other materials. Such storage methods are subject to rodent attack and infestation leading to high wastage and quality deterioration.

Looking at this and several other reasons, 37-year-old Kishor Jha started Ergos, an agri-supply chain firm based in Bengaluru. He says that there were several reasons that turned his attention to the agri space.

The domino of ideas

While working at an MNC bank, Kishor was handling portfolios of high-net-worth individuals (HNI), which comprises a mix of financial products including some commodity derivatives. One of the products was commodity arbitrage and it basically had three entities: investors, millers/processing company, and traders.

Kishor noticed that millers/processing companies are keen on fixing the price of raw materials for about one to two months, but they don’t have enough supporting cash flow or appetite to take delivery. Traders have risk-taking ability to leverage the underline opportunity, and investors want fix return on securitised assets. Kishor says,

“If you see, grower/farmers are nowhere in the picture. The questions start from here: Why are they not involved in this arrangement? How to bring them into the mainstream? What are the support system required? How to build an ecosystem around that? The basic principle is if the farmers are not participating in the whole arrangement, my personal opinion says, sustainability will be questioned always.”

With this idea in mind, Kishor met 39-year-old Praveen Kumar, who hails from Akhtiyarpur, a village in Samastipur district in Bihar, and has been working in HR recruitment across MNCs. Being an owner of more than 70 acres of land in Bihar, he has significant on-ground understanding and experience in farming.

Kishor explained the gaps that he felt were there in the agri space. In 2012, the duo decided to meet a couple of farmer in Praveen’s village. Looking at the crop and the produce, Kishor with his banking background immediately started capturing data on the total produce coming from each field.

It was then he noticed that everyone was struggling due to poor post-harvest management. And due to lack of storage facilities, most farmers would end up selling their crops at distress sale prices. Kishor says they found their solution in that very village.

“We met another guy named Sambhu Jha who is also a farmer and had built some 200 tonne capacity warehouse in his village. Due to social issues, no one uses that warehouse including him. We convinced him after many rounds of discussion and hired that warehouse for three years. We then called a farmer meeting at that warehouse and explained them the process and the operations.”

The ride wasn’t easy in the first year and there were only four or five farmers who participated.

“The answer to everything was only demonstrating and validating. We took two years to reach the level where the farmer started booking the space for warehousing at least two to three months in advance,” says Kishor.

The team faced several challenges linked to financing, marketing, and distribution. Some of the major financial challenges include maintenance of cash flow and operational expenses, especially for small-size warehouses.

This is due to the gap in the meticulous calculations required while managing the consumables, safety, and security of the warehouses.

The marketing and distribution challenges were related to customer engagement, awareness, and trust building, and the need for behaviour change amongst smallholder farmers to adopt warehousing practices.

The team also finds it difficult to attract, train, and retain suitable talent, as the concept is new and people with desired skill-sets are rarely available. The enterprise needs to recruit the right talent, and train them professionally, to obtain the required business outputs.

“Ergos only engages those set of warehouses which is scientifically constructed and plans are approved by NABARD, WDRA, or state agriculture department,” adds Kishor.

The team conducts a through due diligence of the warehouse and creates a survey report covering titleship of warehouse ownership, location, approach road, flood history, height from the ground, distance from police station, fire station, theft history, number of gates, security arrangement, flooring, ceiling condition, number of pillars, and wall conditioning among others.

Ergos then finalises the terms of long-term lease of no less than five years with the landlords and executes the agreement on an appropriate revenue stamp with all KYC documents, obtains notary declaration from the owners, and registers the agreement in local registrar office.

Work after the choices are made

What Ergos actually does is offer scientific warehousing solutions and collateral management facilities to smallholder farmers in rural Bihar. It operates a chain of efficient and hygienic warehousing facilities situated within a range of three to four kilometres from the farmers’ locations.

It provides 24/7 access to farmers to transact, sell, or hold the commodities. Farmers can thus track market movements and sell when they can realise better prices with the help of portfolio adviser; Village Champ (VC) who is a one-point contact for them to assist on the transaction.

The team runs a network of micro-warehouse-based 'farmer offices' that works in tandem with the retail partners of Ergos to build capacities of smallholder farmers, and to expand the existing user base. At present, there are nearly 28 farmer offices, and the enterprise plans to increase this number to 500 in the next couple of years.

The micro-warehouse runs as a low-cost format that operates at the village level and helps the enterprise to directly bond with the farmers. The enterprise signs agreements with several smallholder farmers who store their agricultural produce in the warehouse.

Once farmers deposit stock in the warehouses, Ergos checks the quality and quantity of the items and issues a warehouse receipt to the farmers certifying the weight, grade, and quality.

After six to eight months, the enterprise is able to negotiate better prices on behalf of the farmers, based on this data. The micro-warehouse network helps Ergos accomplish business development as well as transaction execution. This arrangement also ensures optimum capacity utilisation of the warehouse, and low wastage and higher price realisation for the farmers.

“Ergos is able to achieve higher turnover with limited capital. It has also achieved greater price efficiency in certain crops such as maize, wheat, and paddy, as these are the major crops cultivated in the region,” says Kishor.

The team has also introduced a unique concept of ‘farmers’ portfolio management’, wherein a software application captures basic information about all associated farmers. The agri-tech company also creates general awareness among smallholder farmers regarding the importance of storage solutions.

It showcases the significance of storage solutions through videos, roadshows, and midnight cafes. Ergos also works with local farmer leaders to mobilise interest, and has tied up with Dr Rajendra Prasad Central Agriculture University in Pusa, Bihar, to conduct awareness programmes in its different markets.

Initially, the team set up the warehouse facility with the help of National Collateral Management Service Limited (NCML), which helped the enterprise to understand warehousing and credit access, and also provided access to finance to Ergos-associated smallholder farmers.

The agri-tech startup received an investment from Aavishkaar, an early-stage investor, in March 2015. It works with the government banks such as Industrial Development Bank of India (IDBI), IndusInd Bank, and State Bank of India (SBI), and World Bank (WB) programmes to facilitate Warehouse Receipt Financing.

The team charges Rs 6–Rs 10 per quintal per month as against Rs 15–Rs 20 per quintal per month (with lock-in of four to six months) charged by others. The enterprise also offers various packages that customers can choose according to their requirements. These packages include warehousing, bank linkage for eWHR financing, forward linkages, processors, etc.

By next year, Ergos intends to rent over 30–35 additional warehouses, and expand its operations to other low-income states by replicating the Bihar model. The team also plans to scale its warehousing capacity to 2-3 lakh metric tonnes to connect with over two to three lakh farmers by 2019. And over half a million farmers after that.

By 2020, Ergos aims to reach 5,00,000 farmers and 5,000,00 tonne rural warehousing capacity. It plans to establish a unique procurement process in India that can be replicated globally for processing companies which redefine the existing supply chain process.

The idea, Kishor adds, is to secure storage at farm gate and improve the resilience of an entire farm enterprise by allowing farmers to be price makers than price takers.