How this startup is redefining the way we save and invest 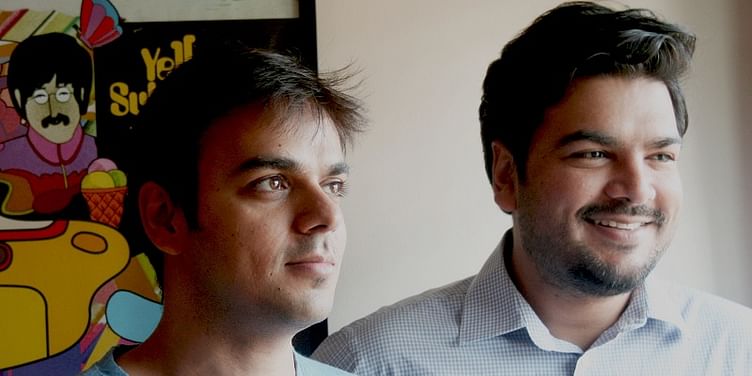 Saving and investing can be a daunting task for most. But what if you could save effortlessly, like while watching your favourite football team win or walking those 10,000 steps a day? For IIT Kanpur alumni Ankit Kumar and Abhishek Malik, the answer to that question was a startup, though it wasn’t their first.

While Ankit holds a master’s degree in design, Abhishek graduated with a degree in economics.

Their first entrepreneurial stint was in 2011, when they created a rickshaw-hailing app for feature phones. Called Yatayat, the startup was incubated in the Summer of Startups programme in Finland.

Although they parted ways shortly after, their paths crossed again in 2013 when both joined US-based Credibase as its first employees. Ankit was heading design, and Abhishek led engineering for the Mountain View-based company.

While this experience helped, it was a personal pain point that led to the birth of their latest venture. Says Ankit,

“The idea came out of a discussion that we weren’t doing that well with money. The problem of not being able to stash away cash as savings was increasingly felt by a large bunch of individuals.”

Ankit further adds: "We have this concept of ‘urban poor’ and owing to certain lifestyles of millennials, saving doesn’t come easy.”

Hence, based on the idea of investing before saving, they started Balance in the second quarter of 2016.

The founders describe Balance as an app for individuals who want savings to be effortlessly integrated with their lifestyle. “Trying to make financial investments better was how we started,” says Ankit.

While doing their research and talking to people, they realised that people had a low appetite for risk, and that restricted the market for investments in India.

What was needed, therefore, was a simple product that was low on risk.

Hence, the solution came by understanding the behavioural economics of saving, which was then integrated in the app to make savings organic.

Adopting a conversational interface, on signing in, the app nudges the user towards picking a goal. Once the goal is set, the app interacts with the consumer accordingly, with the pre-programmed recipes and savings mechanisms kicking in.

According to the company, these recipes are built around a person’s life, turning everyday activities into saving opportunities.

Further, the amount of saving is prompted or pre-set by the customer.

At present, the app is available only to the 2.5 lakh customers of Zerodha’s trading platform Kite, and auto-debits the savings from their demat accounts created on the platform. Customers can withdraw their savings directly from their Kite account.

According to the founders, this closed integration allows them to enrich the product on the basis of inputs coming from Zerodha’s audience base.

However, the seven-member Balance team is keen to open the product to other customers in the next couple of weeks.

From saving to investing

The last phase of the transaction is investing, which is automated. Balance provides two investment options—short-term goals (like a vacation) and tax saving.

To grow your money for short-term goals, the app collaborates with ICICI Prudential Money Market Fund, which provides interest rates of up to 8.65 percent per annum. For tax saving, Balance invests a user’s savings in the ICICI Prudential Long Term Equity Fund, with a three-year period.

For the founders, the philosophy behind choosing asset management companies (AMCs) is based on the lowest risk ratings allowing anytime withdrawals. “Lock-ins can be painful,” states Ankit.

Launched in the first week of May, the app is seeing an average saving of Rs 500 with every task and looking to get close to 1,00,000 users by the end of this year.

The founders claims more than 10,000 users on their platform. Further, the company plans to introduce two new recipes over the next quarter and activate close to 2,00,000 recipes (average two recipes per user) by the end of this year.

Balance says the app is completely free for customers and intends to keep it that way. As to possible revenue models, the founders say they might charge a commission from the AMCs based on the range of financial products provided on the application.

The company has received a funding of Rs 1.5 crore from Rainmatter, Zerodha’s incubator and early-stage fund as well as Nithin Kamath, Founder and CEO, Zerodha.

Going forward, Balance’s primary focus will be on growing the team and bringing more interesting recipes (or use cases) for users to save. As to the team size, they intend to keep it at 10-12 members.

The company also wants to focus on scaling partnerships and increasing collaborations during the current year.

The other prominent new players in the wealth management space are ProsperX and Kuvera.

With investment models like Zerodha and India Funds already in place, fintech companies are expected to move towards offering full-cycle solutions—saving, investing, and payment—under one umbrella.