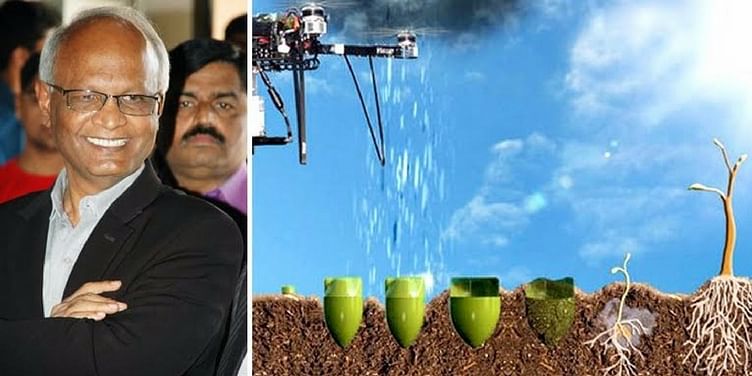 KPJ Reddy, a professor at the Indian Institute of Science (IISc), Bengaluru, will soon be growing forests with the help of seed-bombing drones. Alarmed by how fast natural habitats and wildlife are disappearing, the nature lover was inspired to make a difference.

On World Environment Day last month, he got together with scientists from the aerodynamics and forest departments, and they hit upon the idea of using drones to increase green cover. He chose Karnataka's Kolar district as the site for the trial of the project.

Though the project is in its initial days, the scientists involved are determined to turn all the barren lands green by planting as many trees as possible. One of the team members, Professor SN Omkar, said that the goal right now is to seed 10,000 acres.

Another advantage of using drones is that they will be able to assess which lands will be most productive to seed. The work will start in the Doddaballapur area in North Bengaluru. A science centre is being built on 200 acres of land in the Gauribidanur area.

Reddy, who initiated the project, says that a small area of land was taken as a sample and seeds were planted using this method. Now, they are observing that area to check whether it is possible to grow trees using this technique. The project is expected to go on for the next three years. Moving forward, further work will be done to build drones that will be able to plant seeds on their own.

The drones will have attached cameras to record the progress. The recorded data will later be analysed to understand better methods of planting seeds.

Under the forest department’s supervision, the seeds have been wrapped in balls of manure and sand to ensure they do not go to waste. Imli, amla, and other regional monsoon seeds have been selected for planting. Locals will look after the day-to-day work.

The drones are capable of lifting 10 kg and can stay in the air for an hour at a stretch. While talking about the project, Reddy said,

I cannot predict how successful the project is going to be. However, I am an optimistic person and I hope that our mission is successful.